“Media Isn’t Warning You” That US Careening Towards Food Crisis

“Media Isn’t Warning You” That US Careening Towards Food Crisis 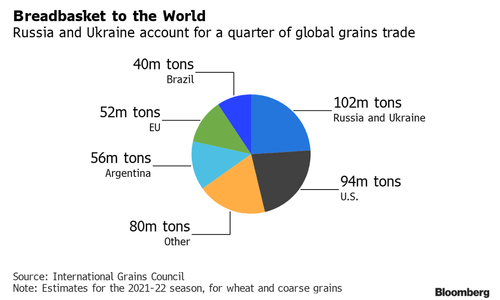 by ZeroHedge News
Two weeks after the Russia-Ukraine crisis began, the world is quickly moving toward a food crisis that could affect millions of people. A spillover of the crisis could soon spark agricultural mayhem in the US.
The curtailment of agricultural exports from Russia and Ukraine will have dramatic knock-on effects on global food supplies. Both countries are known as the ‘breadbasket of the world’ and are responsible for a quarter of the international wheat trade, about a fifth of corn, and 12% of all calories traded globally. Another major problem is access to fertilizers, as Russia has banned exports of the nutrients.
It’s not whether or not there will be a food crisis. It’s how big that crisis will be.
We’ve already noted a handful of emerging market countries to monitor as the Russian invasion is choking off grain exports to them and causing prices to rise, which may result in social unrest. Even in the Western world, agricultural markets have not been immune, and higher prices have stung consumers.
A tweet from Douglas Karr, the founder of the businesses blog Martech Zone, made the point the “media isn’t even warning you” a food crisis in America is emerging.
Karr said he spoke with numerous folks in the food industry who said farmers in the South and Midwest are having trouble procuring fertilizer to grow crops ahead of planting season. He said farmers in the “Midwest are switching,” likely referring to crops that need fewer nutrients because they “can’t get nitrogen nor fertilizer.”

Even before Russia invaded Ukraine, the global food system was strained. Snarled supply chains and adverse weather conditions in top growing regions of the world resulted in low crop yields and rising prices. The supply shock of Ukraine will amplify the crisis as the UN warned global food prices could jump 8%-20% from here (prices are already at record highs). 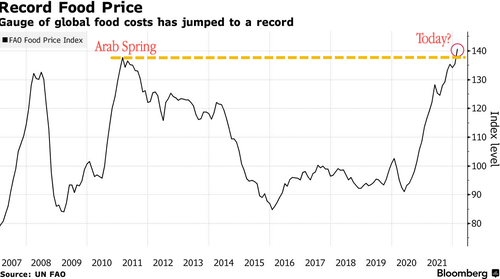 Responding to Karr’s viral tweet, some people said they were buying a freezer to panic hoard food supplies as the worst food crisis has yet to come.
“Likely getting a 2nd chest freezer soon and stuffing it with meats/frozen vegetables/etc. Also, it looks like “preppers” who were dismissed or made fun of last decade are about to be set on being right,” one person said.
Another person said, “Read this and then understand why in the last 6 months several publications have been grooming us to accept eating bugs. All of this was planned. Buy a 2nd freezer, and stock it. Soon.”
Read the full article at ZeroHedge News.
Comment on this article at HealthImpactNews.com.