OUT OF MIND » BREAKING NEWS & HOT TOPICS » COVID-19 » Former BlackRock Advisor Tells RFK, Jr.: ‘FDA is in on the cover-up’ By David Marks

Former BlackRock Advisor Tells RFK, Jr.: ‘FDA is in on the cover-up’ By David Marks

Former BlackRock Advisor Tells RFK, Jr.: ‘FDA is in on the cover-up’ 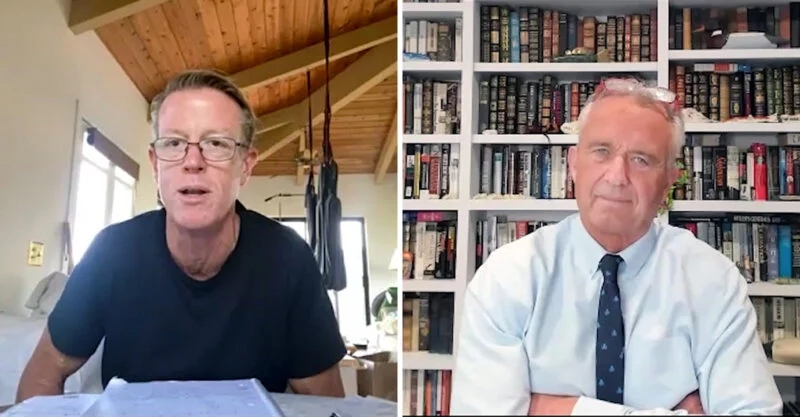 Visit and follow us on Instagram at @globalresearch_crg and Twitter at @crglobalization. Feel free to repost and share widely Global Research articles.
***
In an interview with former BlackRock advisor Edward Dowd on “RFK Jr. The Defender Podcast,” Robert F. Kennedy, Jr. and Dowd discussed why they believe COVID vaccine makers committed fraud, and government agencies know it.
In an interview with former BlackRock advisor Edward Dowd on “RFK Jr. The Defender Podcast,” Robert F. Kennedy, Jr. and Dowd discussed the financial and moral implications of fraudulent data from the COVID-19 vaccine trials.
Dowd, a managing director with BlackRock from 2002 to 2012, said, “what tipped me off to the fraud” was when the U.S. Food and Drug Administration (FDA) announced it wouldn’t release the trial data for 75 years. He knew something wasn’t right.
Dowd told Kennedy:
“The FDA is in on the cover-up, something went down. The other tip for me was in November of last year, a friend of mine from the biotech industry discovered that Pfizer had failed their all-cause mortality endpoint. And that was not available to us when this fanfare occurred in November of 2020, when they all got excited about 95% efficacy.”
Dowd concluded, “the FDA didn’t really look at this clinical trial data” yet rushed it through due to political pressure or “maybe straight-up bribes,” but either way, he said, the vaccines should have never been approved.
Lawsuit Filed against CDC for Hiding COVID Vaccine Safety Data. “V Safe” Smartphone Application
Kennedy and Dowd discussed how the trial numbers were skewed to make it seem the vaccines were effective when the real data showed otherwise.
Kennedy said:
“What it really means is you have to give 22,000 vaccines to prevent one COVID death. And if you’re gonna give 22,000 vaccines, you better make sure that the vaccines don’t kill anybody. Because if they kill one person, you’ve canceled out any benefit.”
Kennedy described how the vaccine makers manipulated the data and the news to maximize profits. He asked Dowd why he thinks there will be consequences.
Dowd said:
“I think there’s enough proof for people to investigate fraud in the clinical data and the FDA’s complicity in this … The tragic part of this is we had to wait for real-world evidence. And the real-world evidence is so awful that there’s gonna be a public outcry. And even though the mainstream media is not participating with this yet, they will. You can’t hide this anymore.”
Dowd also told Kennedy, “investors are slowly waking up to the fact that something is not right” and some are selling their shares in Pfizer and Moderna.
He also said that when the insurance industry awakens to the fraud, there will be greater consequences:
“There’s an industry that’s been defrauded. It’s the insurance industry. They are currently paying for excess deaths due to a product that kills. And they’re gonna be paying for years of disability from vaccine injuries. I don’t think they’re gonna put up with that once they realize what’s happened.”
Kennedy described how the insurance industry has ignored the autism epidemic and the general degradation of health in the U.S. He asked Dowd to explain why insurance industry executives would react any differently to illness and death caused by COVID vaccines.
Dowd said:
“The insurance industry didn’t price this, this is the problem. So it’s such a catastrophic number and the injuries that are gonna be created for years, they’re gonna hurt their capitalization over time… you’ve been seeing a problem that’s been going on for years, but it was in different, smaller areas — but now they bit off more than they can chew. They just poisoned 220 million Americans. This is literally a bridge too far.”
Kennedy and Dowd discussed why the false narrative surrounding COVID is about to crumble.
Kennedy commented on people’s reluctance to doubt the medical profession and the pharmaceutical industry:
“The big pushback you get, at least that I get, when I try to explain to loved ones and family and friends — they say, ‘We don’t believe it. There’s a million doctors out there, and you’re saying that they’re all involved in a conspiracy? That they all know that they’re giving this poison to people and that they’re killing them? There’s no way that’s happening.’
“And what I say is, the doctors don’t know — they believe what the [Centers for Disease Control and Prevention] and FDA tell them. All sorts of information. Very few of them are actually reading the peer-reviewed publications.
“We’re thinking independently and questioning the authorities.”

OUT OF MIND » BREAKING NEWS & HOT TOPICS » COVID-19 » Former BlackRock Advisor Tells RFK, Jr.: ‘FDA is in on the cover-up’ By David Marks