The signature feature of black holes is that they are black — objects which fall into the hole can no longer be seen and can no longer influence the outside Universe. In classical general relativity, ‘no hair’ theorems severely restrict the properties of a black hole which can affect other objects. These are limited to its total mass, spin, and charge. Now, four theoretical physicists show that these properties no longer hold when quantum gravitational effects are considered. They show that the quantum state of the graviton field caused by the black hole contains information about the interior state of the hole. This quantum influence extends past the event horizon and to the furthest reaches of spacetime. As a specific example of quantum effects, they show that exchanges of virtual gravitons result in an extremely weak gravitational force, which is absent in classical physics. The size of this force depends on the specific arrangement of matter which formed the hole, not just on its total mass. The team’s results may resolve Stephen Hawking’s black hole information paradox, which has challenged physicists since 1976. The ‘quantum hair’ allows information from behind the horizon to emerge in Hawking radiation, so that an evaporating black hole obeys a property called quantum unitarity. 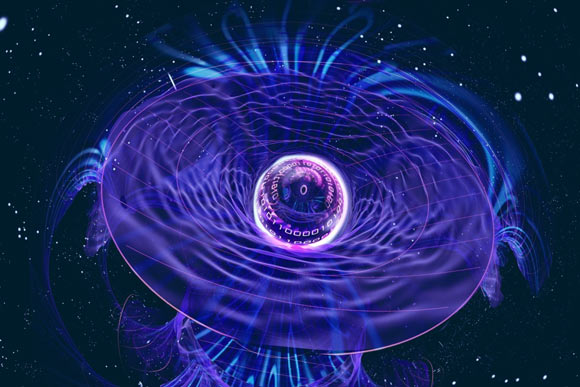 Calmet et al. show that the quantum state of the graviton field caused by a black hole contains information about the interior state of the black hole. Image credit: E. Edwards / Joint Quantum Institute.
In a paper published in the journal Physical Review Letters, Michigan State University’s Professor Stephen Hsu and colleagues demonstrate that black holes are more complex than originally understood and have a gravitational field that, at the quantum level, encodes information about how they were formed.
In the 1960s, eminent physicist John Archibald Wheeler expressed the fact that black holes are lacking any observable features beyond their total mass, spin and charge with the phrase ‘black holes have no hair.’ This is known as the no-hair theorem.
Having demonstrated that black holes do in fact have this additional characteristic, Professor Hsu and co-authors label their discovery as ‘quantum hair from gravity,’ in a nod to Wheeler’s phrase.
“Black holes have long been considered the perfect laboratory to study how to merge Einstein’s theory of general relativity with quantum mechanics,” said Professor Xavier Calmet, a physicist at the University of Sussex.
“It was generally assumed within the scientific community that resolving this paradox would require a huge paradigm shift in physics, forcing the potential reformulation of either quantum mechanics or general relativity.”
“What we found — and I think is particularly exciting — is that this isn’t necessary.”
“Our solution doesn’t require any speculative idea, instead our research demonstrates that the two theories can be used to make consistent calculations for black holes and explain how information is stored without the need for radical new physics.”
In their paper, the authors show that matter that collapses into a black hole leaves an imprint in the gravitational field of the black hole when quantum gravitational corrections are taken into account. This imprint is what they refer to as ‘quantum hair.’
Specifically, they compared gravitational fields of two stars with the same total mass and radii but different compositions.
At the classical level, the two stars have the same gravitational potential, but at the quantum level, the potential depends on the star composition. When the stars collapse into black holes, their gravitational fields preserve the memory of what the stars were made of and lead to the conclusion that black holes do have hair, after all.
“The concept of a causal or event horizon is central to the notion of a black hole,” Professor Hsu said.
“What is behind the horizon cannot, in classical physics, influence the exterior.”
“We showed that there are intricate entanglements between the quantum state of the matter behind the horizon (inside the hole) and the state of gravitons outside.”
“This entanglement makes it possible to encode quantum information about the black hole interior in Hawking radiation that escapes to infinity.”
“It turns out that black holes are in fact good children, holding onto the memory of the stars that gave birth to them,” Professor Calmet added.
In a follow-up paper, published in the journal Physics Letters B, Professor Calmet and Professor Hsu show that their ‘quantum hair’ resolves Stephen Hawking’s black hole information paradox.
In 1976, Professor Hawking argued that black holes cause pure states to evolve into mixed states.
Put another way, quantum information that falls into a black hole does not escape in the form of radiation; rather, it vanishes completely from our Universe, thereby violating unitarity in quantum mechanics.
The ‘quantum hair,’ however, provides the mechanism by which information is preserved during the collapse of a black hole and as such resolves one of modern science’s most famous quandaries.
“As we know from Einstein, gravitational forces arise from the very geometry of spacetime itself,” Professor Hsu said.
“Hence, when we quantize gravity, we expect to discover new things about quantum spacetime.”
“In this case, we learn that the Hawking radiation from a black hole is entangled with the quantum state of spacetime itself!”
_____
Xavier Calmet et al. 2022. Quantum hair from gravity. Phys. Rev. Lett 128 (11): 111301; doi: 10.1103/PhysRevLett.128.111301
Xavier Calmet & Stephen D.H. Hsu. 2022. Quantum hair and black hole information. Physics Letters B 827: 136995; doi: 10.1016/j.physletb.2022.136995