NASA’s Juno spacecraft has snapped a lovely photo of its target planet, Jupiter, and two Jovian moons: Io and Europa. 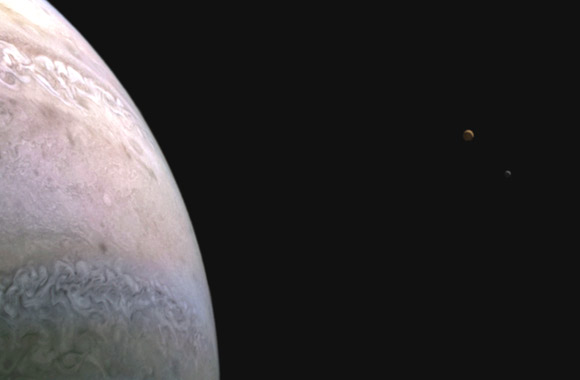 This Juno image shows Jupiter, Io and Europa (from left to right). Image credit: NASA / JPL-Caltech / SwRI / MSSS / Andrea Luck.
Juno launched on August 5, 2011, from Cape Canaveral, Florida, with the ambitious mission of finally seeing beneath the dense clouds covering Jupiter.
On July 4, 2016, the robotic orbiter finally reached the giant planet’s orbit.
Juno is in a polar orbit around Jupiter, and the majority of each orbit is spent well away from the planet.
But, once every 53 days, Juno’s trajectory approaches Jupiter from above its north pole, where it begins a 2-hr transit — from pole to pole — flying north to south.
During these flybys, the spacecraft is probing beneath the obscuring cloud cover of the giant planet and studying its auroras to learn more about its origins, structure, atmosphere and magnetosphere.
Juno captured the new image of Jupiter’s southern hemisphere and two of its moons, Io and Europa, during the spacecraft’s 39th close flyby of the gas giant on January 12, 2022.
“Io is the Solar System’s most volcanic body, while Europa’s icy surface hides a global ocean of liquid water beneath,” said members of the Juno team.
At the time the image was taken, Juno was about 61,000 km (38,000 miles) from Jupiter’s cloud tops, at a latitude of about 52 degrees south.
“Juno will have an opportunity to capture much more detailed observations of Europa — using several scientific instruments — in September 2022, when the spacecraft makes the closest fly-by of the enigmatic moon in decades,” the researchers said.
“The mission will also make close approaches to Io in late 2023 and early 2024.”