OUT OF MIND » THE INSANITY OF REALITY » GLOBAL FOOD CRISIS » Waste Not? Some States are Starting to Send Less Food to Landfills

Waste Not? Some States are Starting to Send Less Food to Landfills

Waste Not? Some States are Starting to Send Less Food to Landfills

By Elaine S. Povich
Prominent Northeastern grocery store chain Hannaford Supermarkets made headlines recently by declaring that for an entire year it had not sent any spoiled or outdated food to landfills, where the organic decomposition process produces methane, one of the most potent greenhouse gases.
Instead, Hannaford, which operates in New England and New York, is contracting with an anaerobic food reprocesser to strip the food from its packaging, mix it with microbes and manure, and turn it into fuel, fertilizer, and bedding for dairy cows.
While bovines belching methane also is a climate problem, the Hannaford effort targets one of the leading sources of methane. Food waste in landfills produces the third largest amount of methane emissions in the United States (15%), after petroleum production (30%) and animal gas and manure (27%), according to the U.S. Environmental Protection Agency.
At least eight states, all in the Northeast and mid-Atlantic except California, have laws requiring some reprocessing of food waste, to keep it out of landfills and cut down on greenhouse gases, according to the National Conference of State Legislatures.
States have come up with a number of approaches to reduce food waste, especially the refuse bound for landfills. They include laws that require separation of food from other waste and incentives in the form of grants. 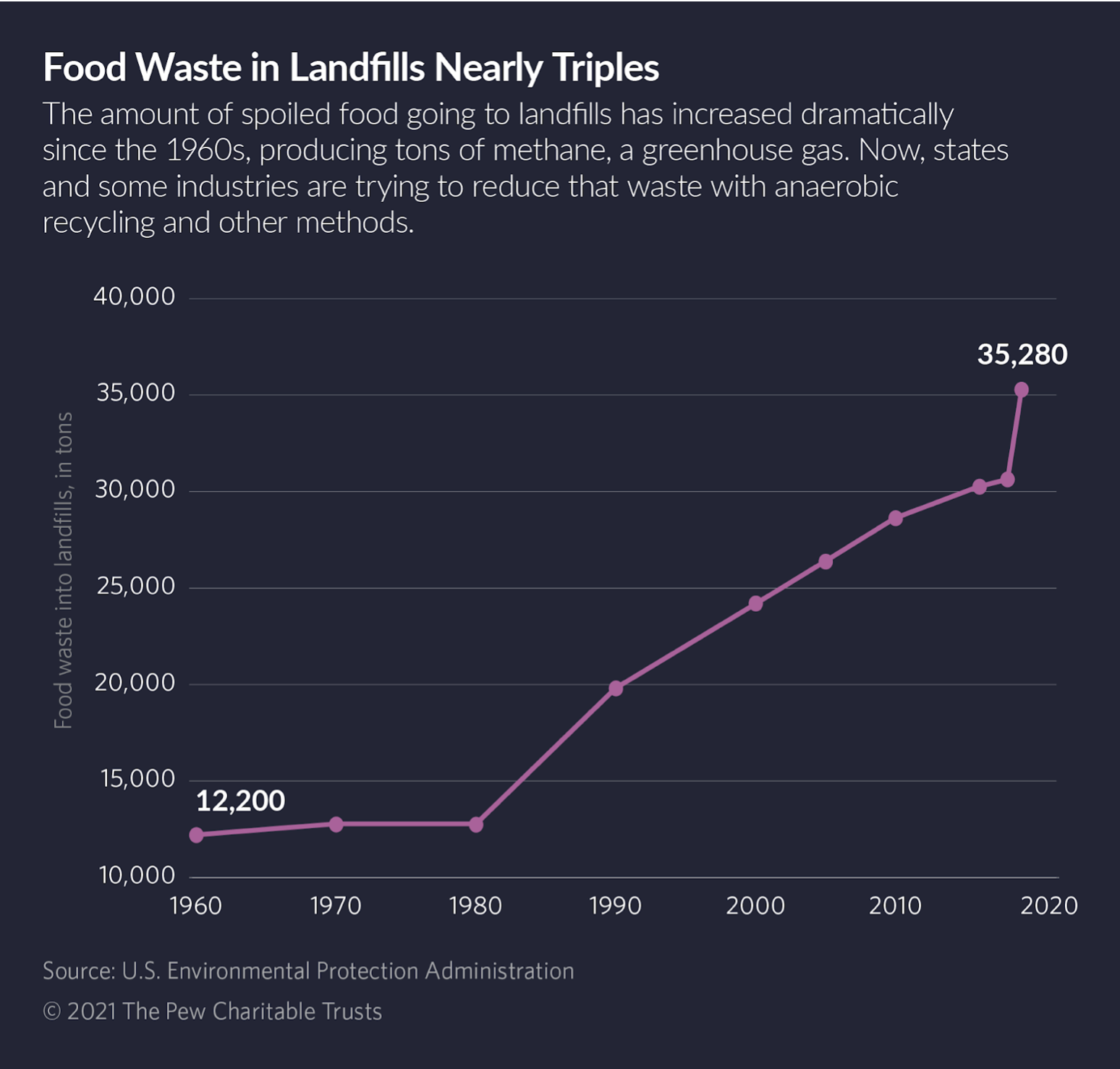 This year, state lawmakers have introduced at least 52 bills in 18 states involving food waste management, according to the National Conference of State Legislatures. Last year, 46 bills were introduced across 17 states and the District of Columbia. The waste management firm RTS noted that some states and cities including Tennessee and Washington, and Los Angeles and Madison, Wisconsin, have created food waste task forces.
Maryland and New Jersey are the latest to adopt similar laws. Maryland requires food facilities producing more than two tons of food waste a week to separate it from other waste and divert it from landfills by January 1, 2023. Facilities that produce one ton a week have until January 1, 2024. In both cases, the law applies only if the food originates within a 30 mile radius of a recycling facility.
Maryland Gov. Larry Hogan, a Republican, allowed the bill to become law without his signature.
Critics of the Maryland law argued that a mandate would be costly and called for letting market forces work things out. The Maryland Association of Counties opposed the bill because of worries over increased costs, especially to schools and prisons.
“Amidst a health pandemic and an accompanying fiscal uncertainty, counties are struggling to maintain service levels to meet essential needs — including in educational and correctional facilities. Placing an added cost burden onto those facilities will only divert resources. MACo believes that the bill should not apply to local government-owned facilities,” the organization said in written testimony during a hearing on the bill in January.
The state’s restaurant association fought the measure, too; the legislature ultimately exempted restaurants before passing the law, according to Wastedive, a trade publication.
New Jersey Governor Phil Murphy, a Democrat, last year signed into law a requirement that producers of food waste such as hospitals, prisons, restaurants, and supermarkets recycle food garbage rather than send it to incinerators or landfills. The law will go into effect this fall.
The New Jersey Sierra Club, an environmental advocacy group, while generally praising the bill, criticized in a news release a loophole that allows the state Department of Environmental Protection to issue waivers, which the organization argued could be used to undermine the law’s intent.
The National Grocers Association has not taken a public position on disposal of food waste by independent grocery stores. In an email, Jim Dudlicek, director of communications for the trade group, noted it has 1,500 members whose stores are privately controlled. He did say, however, that some of its members have “innovative” programs for food waste, including Big Y stores, which divert food waste from landfills by donating usable food either to food banks or for animal feed, according to the company’s news release. 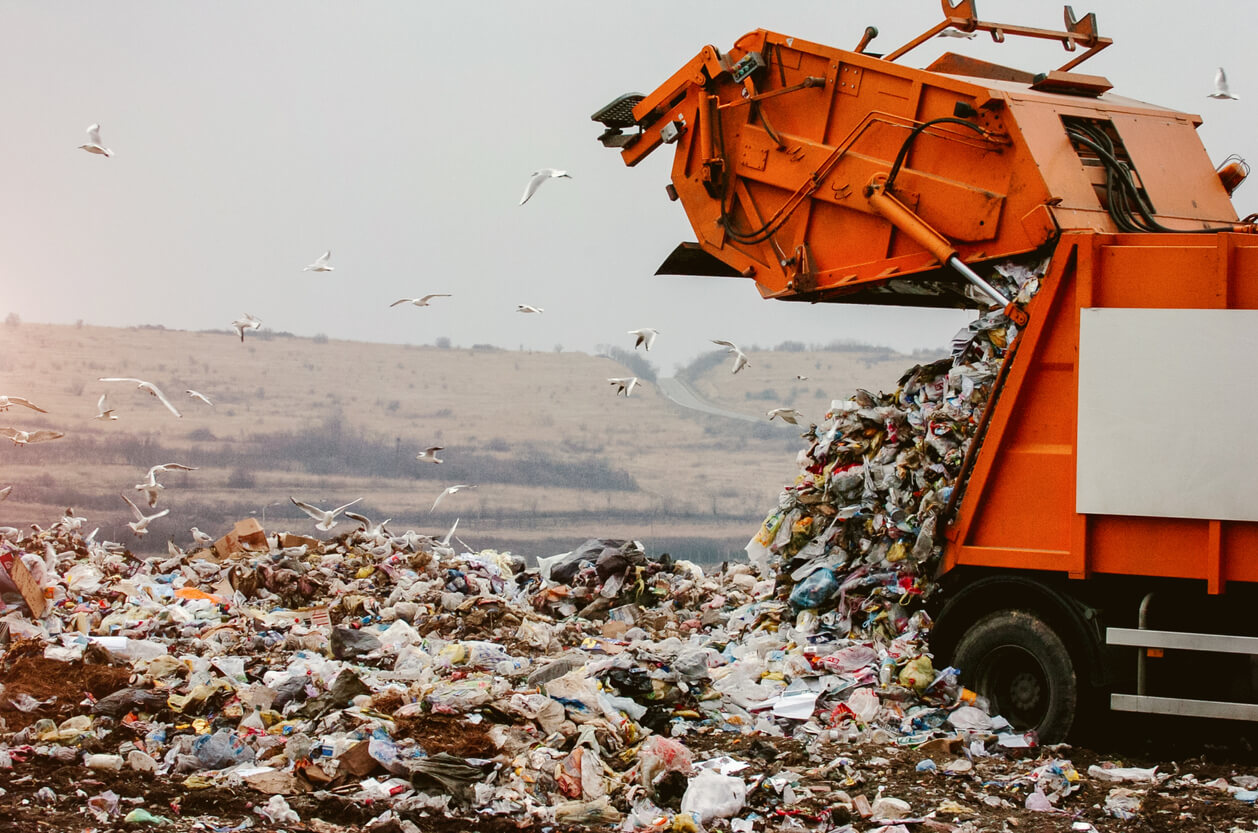 iStock.com/choice76
Vermont is among the leaders in states that have “no landfill” laws for organic waste. The state has close to a full ban on organic waste in landfills, said Josh Kelly, materials management section manager for the state’s department of environmental conservation.
Any Vermont entity that produces more than one ton a week of organic waste must separate it from landfill trash and compost it, or reprocess it if there is a facility within a certain distance, he said. The initial statute was passed in 2012 and was just fully implemented in 2020, despite the pandemic.
“There was talk of delaying it because of the pandemic, but it was not delayed,” Kelly wrote in an email.
The law, combined with some grants from the state, has served to reset minds and procedures at large facilities, as well as in individuals, Kelly said in a phone interview. The idea, he said, is to get people to think, “it’s against the law to throw a banana peel in the trash,” before they toss it.
The state grants are funded by a fee of $6 a ton for regular trash.
By January 2022, California will require statewide collection and recycling of organic waste from all businesses and residents, including processing collected waste to become compost, clean electricity, or biofuel, according to Maria West, communications director for CalRecycle, the state’s recycling agency.
In an email, West said the goal of the law is to reduce organic waste sent to landfills by 75% by 2025.
She said the pandemic briefly interrupted recycling and reprocessing efforts as the state assessed the safety of workers who were separating waste items. But by June 2020, recycling was “deemed essential and safety protocols allowed separating to continue,” she said.
In addition, she said, the California law requires the state by 2025 to recover 20% of edible food otherwise sent to landfills to feed people in need. 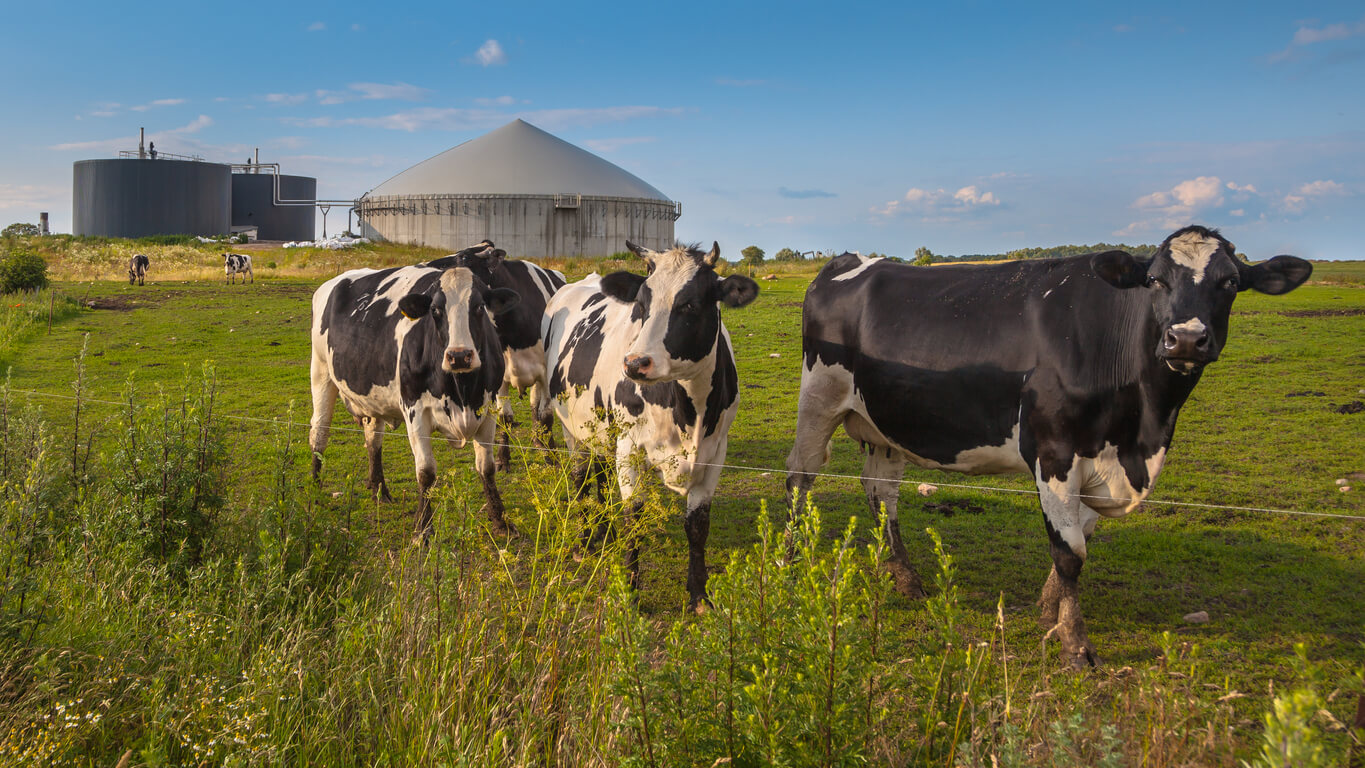 iStock.com/CreativeNature_nl
Long ramp-up times in the effort to curb food in landfills are common even in the private sector, Hannaford health and sustainability expert George Parmenter said in a phone interview. His company had been taking smaller steps for many years to try to process food waste in the most environmentally friendly way possible, he said.
“We had a plan, eight or nine years ago, to work on food waste and get our arms around it and deal with it in a methodical way,” he said. At first, Hannaford stores sent their food waste to farms that composted it, but that also produces methane, and the facilities are generally smaller and scattered.
They eventually hit on Agri-Cycle Energy, an anaerobic food waste processor with a plant in Exeter, Maine. The key was the plant’s “de-packager” — automated equipment that freed store workers from having to scrape the spoiled food from the packaging, saving time and work hours. Hannaford is able to truck the spoiled food, packaging and all, to the plant.
Dan Bell, president and co-founder of Agri-Cycle, said the company began in 2011 and has grown annually. The Exeter site also includes a working dairy farm, owned by the family of Bell’s partner, Adam Wintle, providing a companion site for the use of the fertilizer and cow bedding produced.
The anaerobic process generates biofuel that runs the waste-processing engines. The company sells the extra power to electric companies, Bell said.
Because the process is contained in a building, he said, no odor escapes. The same cannot be said for the dairy farm, where manure smells are a fact of life, he acknowledged.
The company was helped by both federal and state grants for waste firms, which raised “a couple million” for the operation, Bell said. In addition, a power purchase agreement regulated by Maine assures that power produced will be bought by utilities, he said.
But Maine, unlike other New England states, does not have a law that requires food waste be kept out of landfills, according to Paula Clark, director of the division of materials management in the Maine Department of Environmental Protection.
“We’ve talked about it from time to time,” she said in a phone interview. “We were not comfortable that Maine has sufficient capacity in composting or anaerobic digesting.” She added that the state is focused on providing grants and advice to help municipalities construct those facilities. 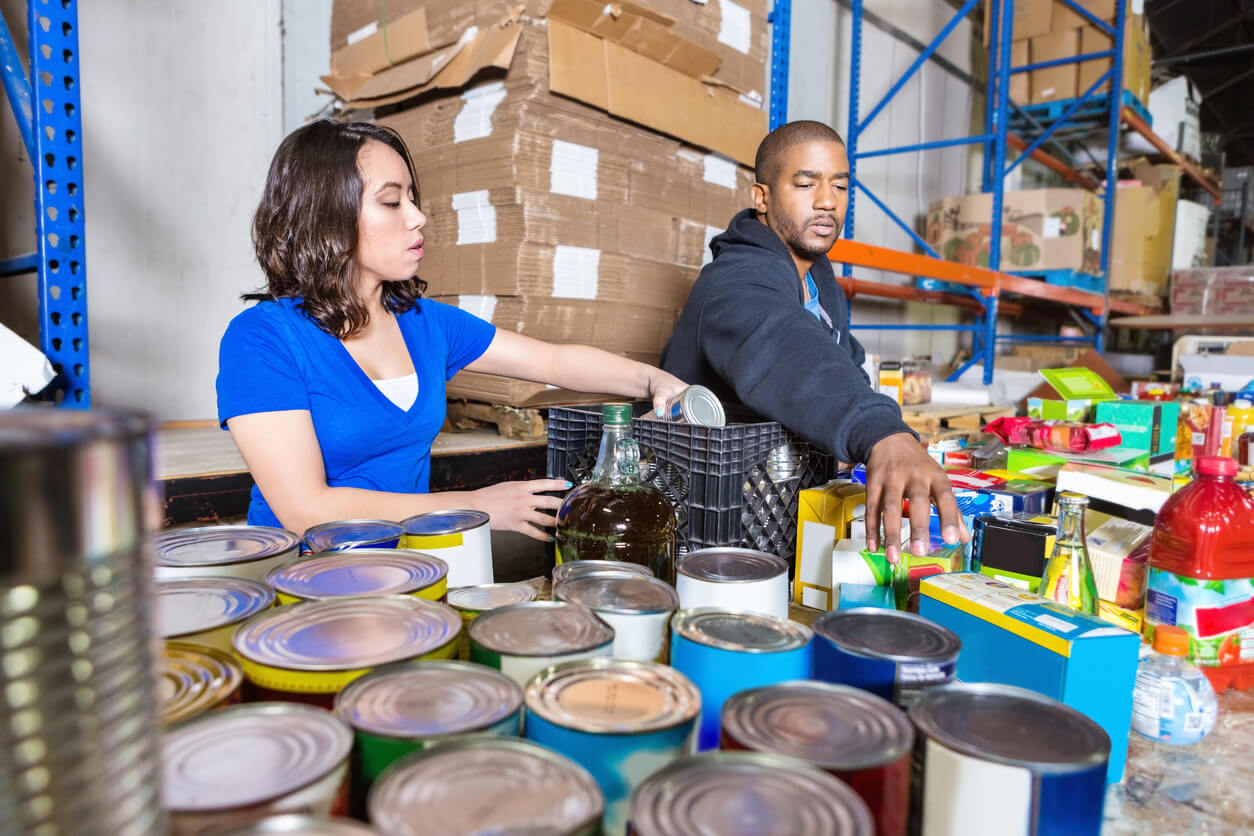 iStock.com/SDIProductions
Many grocery stores already donate outdated, but still edible, food to food banks. And some anti-hunger advocates argue that the focus on how to dispose of food waste diverts attention from the need for food that is past its expiration date to be donated.
Preventing food waste at the beginning of the supply chain is better for the world altogether than concentrating on what to do with what’s spoiled later, said Jennifer Molidor, senior food campaigner for the Center for Biological Diversity, a nonprofit environmental group based in California.
“Preventing food waste is much more environmentally useful than dealing with it later,” she said in a phone interview.
She said some grocery stores and other large food entities “greenwash” the issue by donating to environmental causes or just measuring how much food is wasted rather than putting their efforts into donations of edible food.
She called for stores to follow EPA’s food recovery hierarchy, which focuses on solutions at the top of the chart, especially food donations, to drastically cut the amount that is wasted. The hierarchy calls for cutting down on the amount of surplus food that’s produced, feeding hungry people with leftover usable food, then feeding animals, then using what’s in anaerobic processing, then composting, and finally, sending the rest to landfills.
“The No. 1 thing is prevention,” Molidor said. “If you don’t waste food, you don’t have to worry about landfills.”

Tell us in the comments:

OUT OF MIND » THE INSANITY OF REALITY » GLOBAL FOOD CRISIS » Waste Not? Some States are Starting to Send Less Food to Landfills