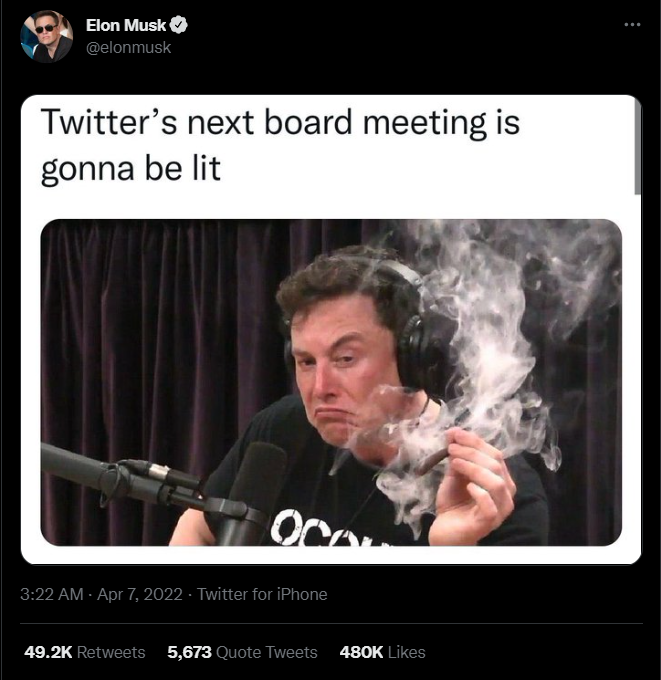 Source: Tim O’Brien
The digital town square is undergoing an unexpected shake-up with Elon Musk taking a nine percent majority stake in Twitter. Ramifications will be felt on both sides of the political divide through the midterm elections and beyond.
In a Monday filing with the U.S. Securities Exchange Commission (SEC), it was reported that Elon Musk has taken a 9.2 percent stake in Twitter with 73.5 million shares in the company. His investment was estimated at roughly $2.89 billion. This makes him the majority shareholder in the company.
Musk is among the richest people in the world.  Forbes lists his worth as more than $287 billion.  As for size, Twitter’s market capitalization was valued at just over $31 billion the Friday before Musk’s news. A few hours after Musk bought his shares, the company’s market cap rose to over $38 billion. And this is just on the news of his purchase, before any anticipated changes at the company.
For comparison, Meta, the company that owns Facebook, Instagram and other digital platforms, had a market cap of roughly $230 billion at the time of the Elon Musk-Twitter news.
Clearly, Twitter is significantly smaller in financial terms than its Big Tech sibling. But its outsized influence has been a point of contention on both the Left and the Right.
The Digital Town Square
Perhaps nobody illustrated the power of Twitter in recent years more than former President Donald Trump, famous for his tweets that gave him a way to speak directly to the American people without the filter of third-party media. At the same time, his tweets drove the corporate media narrative whether it liked it or not.
But the Left controls Big Tech, and responded by orchestrating the deplatforming of Trump.

On the Friday after the January 6, 2021 riots at the U.S. Capitol, Twitter saw an opportunity and seized on it. It suspended the sitting President of the United States from its platform. Over the course of that weekend other Big Tech firms essentially destroyed upstart Twitter competitor Parler and sought to make Trump a nonentity across several other channels, including e-commerce, email, and other platforms. On the final day of his presidential term, Twitter, Facebook, YouTube, and others had suspended or effectively banned Trump from the Internet.
As this was happening, hundreds of conservative Twitter users saw massive numbers of followers disappear before their eyes.  One by one, many of those users would face suspensions and bans of their own.
For Twitter and the rest of Big Tech, emboldened by its Pearl Harbor-style attack on conservative free speech, the relentless deprivation of speech and censorship continued. In just over a year, America has seen how the narrative for COVID, COVID treatments, vaccines, and other pandemic-related information could be manipulated and censored by Twitter.
A nebulous “Terms of Service” has been used as a sledgehammer to prevent any thought that strayed from The Narrative from reaching social media users and consumers of corporate media.
It didn’t stop with the pandemic. Anyone whose tweets depart from the narratives on school curricula or the pedophilia grooming of children in schools and libraries can risk Twitter suspension or a permanent ban.
Elon Musk has Had Enough
Elon Musk, a regular user of Twitter himself, has grown frustrated with the platform’s propensity to manipulate the narrative.
On March 26th, Musk Tweeted, “Given that Twitter serves as the de facto public town square, failing to adhere to free speech principles fundamentally undermines democracy. What should be done?”
In a series of subsequent tweets, he hinted that he was giving serious thought to either creating a rival platform to Twitter or some other solution. Prudently, he didn’t reveal in advance his plans to buy nine percent of the company.

A look at Musk’s history reveals that he is not afraid to take bold risks, but they are usually smart risks.  In the end, he tends to come away with more money than he invested. Chances are he’ll make money this time around, but it’s obvious his motives aren’t completely financial.
Clearly, he’s not happy with the company’s pattern of censorship, of manipulation, of serving the leftist ideology.
To be sure, it’s probably a mistake to presume Musk is a conservative, at least in a traditional sense. But he does give an indication that he appreciates the American dream, what it has done for him and so many others. He knows that freedom of speech is the cornerstone to achieving that dream.
What’s Next?
Wall Street will be watching to see if Musk, who is now on the Twitter Board of Directors, takes an activist role in shaking up the Twitter management team, its policies and protocols, and its algorithms that limit freedom of speech.
A major symbolic statement would be to return Donald Trump’s Twitter account to him, and then to return to other users their accounts which have been suspended.
Will there be a proxy fight for control of Twitter? Anything’s possible. If Twitter is deemed to be that important to the Left, there are no small number of well-heeled leftists who could pony up the money to rival Musk for control of the company.  This, of course would drive up the value of company shares making Musk that much richer.
Before they would do that, however, they’d have to consider if it’s worth it to wage such a fight against a man who has the ready resources to win it if he chooses. If his initial investment is any indication, he plans to win.
In Washington, expect to start seeing more of Senator Amy Klobuchar, the Democrat from Minnesota, who has led the charge from the Left for repeal of Section 230. This gives Internet platforms like Twitter immunity when it comes to third-party or user-generated content.
It states: “No provider or user of an interactive computer service shall be treated as the publisher or speaker of any information provided by another information content provider.”
Klobuchar and her fellow Democrats have sought to limit Section 230 liability shields because they believe Big Tech is not doing enough to censor users.
On the Right, conservatives have sought to repeal Section 230 because of the unusual power it has placed in the hands of Big Tech, leading to increased censorship of conservative voices. As they’ve made their case against Section 230, conservatives have centered on free speech for all.

With Musk presumably taking the lead at Twitter, expect conservatives to cheer his quick fix and his hands-on style to get Twitter as the digital town square back on track. Will they continue to push for repeal of Section 230? We’ll have to see.
At the same time, Musk has now put a political target on his back. The Left will throw everything they have at him and his other companies.
Will they continue to defend a “private company’s right to operate as it wants” as they have with Big Tech so far? That’s tricky. The Left will have to balance lashing out at Musk and Twitter against working to protect Meta and other left-leaning tech firms.
But never forget, Twitter is what it is, the national “town square.” It sets the narrative. The reason alternative versions of Twitter have not succeeded to date is that Twitter is legacy, it’s big, it’s powerful.  Even the much bigger Facebook platform does not have the same influence on the national discourse.
Now, Twitter has a new boss, not the same as the old boss. Let the fun begin.