January 6 Capitol Riot Defendant Found Not Guilty After Testifying Police Let Him Into The Building Fri Apr 08, 2022 12:28 am 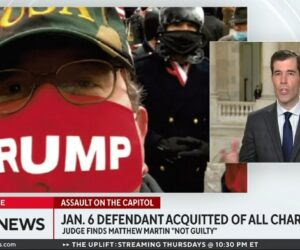 January 6 Capitol Riot Defendant Found Not Guilty After Testifying Police Let Him Into The Building
By Rusty Weiss
April 7, 2022 at 11:50am


A federal judge on Wednesday found a January 6 Capitol riot defendant who claimed police allowed him to enter the Capitol during the riot not guilty of all charges.
It marks the first acquittal for any defendant in cases related to the riot last year.
Matthew Martin, a former government contractor from New Mexico, admitted going into the Capitol but insisted two Capitol Police officers had waved him in through a door.
For the most part, Judge Trevor N. McFadden agreed, suggesting Martin “reasonably believed” that police officers were allowing the crowd in and found him not guilty of each of the four misdemeanors he had been charged with.

McFadden, appointed as District Judge of the United States District Court for the District of Columbia in 2017 by former President Donald Trump, suggested Martin’s behavior was “minimal and non-serious” and that he appeared to be a “silent observer.”
The New York Times notes that an acquittal based on a minimal role in the riot and associated low-level charges could embolden others to fight charges against them by going to trial rather than pleading out.

Prior to this ruling, over 200 people already pleaded guilty to misdemeanors connected to the January 6 riot. Hundreds more such cases are pending.

“It was beautiful. I will remember today for the rest of my life,” he wrote in a text message to his supervisor later in the day.
Martin would be fired from his job at the Department of Energy’s National Nuclear Security Administration where he worked as a senior engineer after being charged.
But, Martin insisted that he didn’t do much of anything while he was inside the Capitol, a claim made by many charged with similar offenses.
CBS notes that video evidence backs up his claims: “Martin’s movements on January 6 were documented using CCTV footage from inside the Capitol and data, including video, from his own cell phone. Martin was not charged in connection with any of the violence seen on January 6 and was not found to be a member of any extremist groups.”
Video played at the trial, according to the Daily Mail, “appeared to show an officer moving his arm in a waving motion inside the building as the rioters moved past them.”