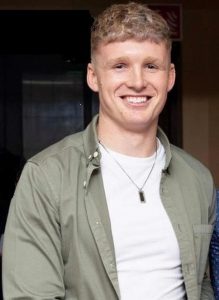 Mr. Red Óg Murphy.
DUBLIN — A 21-year-old teaching student and talented footballer is dead, as mainstream media refuse to inquire about the likely culprit.
Mr. Red Óg Murphy is from the town of Curry, County Sligo in the Republic of Ireland, about 130 miles (208 km) northwest of Dublin. He was a very talented footballer. The North Melbourne Kangaroos, of the Australian rules football league (AFL) selected him as a Category B rookie in 2018 when he was 18. Each AFL team may recruit three Category B rookies per season, meaning, among other criteria, a player not from Australia. The AFL has official affiliation agreements with 15 other international bodies, including Australian Rules Football League of Ireland.

Mr. Murphy never played for the AFL Kangaroos, but did play 12 games with their Victorian Football League (VFL) affiliate that year, according to Yahoo! Sports. The VFL is considered semi-professional and thus does not pay very well. Mr. Murphy left the team one year into a two-year contact. Note that Aussie rules football and Gaelic (Irish) football are similar, but different. Mr. Murphy said in 2019 that he didn’t have the same passion for Aussie rules football as he did for Gaelic football.
He played football in the Gaelic Athletic Association (GAA) for the Sligo county football team in 2020 and 2021. But he left the league after the 2021 season to focus on his studies at Dublin City University. Mr. Murphy also played for the university’s GAA club team.

Details are scant as to what led up to Mr. Murphy’s death, which is standard operating procedure with these deaths of young people. Mr. Murphy “died suddenly in his sleep” on the morning of April 1, according to reports. The foregoing (dying in their sleep) is becoming quite common for post-injection deaths, on the same level of dying “suddenly and unexpectedly.” Mr. Murphy’s body was found unresponsive in his dormitory at DCU, according to one source. A few Twitter users and bloggers are saying it was suicide.
There’s no definitive evidence that shows Mr. Murphy received the injections. But the GAA had very strange vaccine mandates through 2021. All attendees at the All-Ireland final at Croake Park on September 11 were required to show a vaccine passport. Teams that were less than 100% fully-vaccinated were not allowed to use showers or dressing rooms. Northern Ireland teams were required to be fully-vaccinated to enter any GAA facility.
All DCU students must download a COVID-19 contact tracing app on their smartphones. The Irish government removed its contact tracing requirements in January for all triple-vaxxed people. The preponderance of evidence suggests that Mr. Murphy was triple-vaxxed.
Mr. Barry Gallagher, chairman of the Curry GAA Club, called Mr. Murphy’s death “a terrible tragedy.” A Sligo GAA spokesperson expressed deep shock, and called Mr. Murphy’s death “untimely.” Funeral arrangements are delayed until after the post-mortem examination.