How Cannabis Affects Our Cognition and Psychology


Summary: Researchers investigate how cannabis can influence a number of cognitive and psychological processes.
Source: The Conversation
Cannabis has been used by humans for thousands of years and is one of the most popular drugs today. With effects such as feelings of joy and relaxation, it is also legal to prescribe or take in several countries.
But how does using the drug affect the mind? In three recent studies, published in The Journal of Psychopharmacology, Neuropsychopharmacology, and the International Journal of Neuropsychopharmacology, we show that it can influence a number of cognitive and psychological processes.
The United Nations Office on Drugs and Crime reported that, in 2018, approximately 192 million people worldwide aged between 15 and 64 used cannabis recreationally. Young adults are particularly keen, with 35% of people between the ages of 18 and 25 using it, while only 10% of people over the age of 26 do.
This indicates that the main users are adolescents and young adults, whose brains are still in development. They may therefore be particularly vulnerable to the effects of cannabis use on the brain in the longer term.
Tetrahydrocannabinol (THC) is the main psychoactive compound in cannabis. It acts on the brain’s “endocannabinoid system”, which are receptors which respond to the chemical components of cannabis. The cannabis receptors are densely populated in prefrontal and limbic areas in the brain, which are involved in reward and motivation. They regulate signalling of the brain chemicals dopamine, gamma-aminobutyric acid (GABA) and glutamate.
We know that dopamine is involved in motivation, reward and learning. GABA and glutamate play a part in cognitive processes, including learning and memory.

Cannabis use can affect cognition, especially in those with cannabis-use disorder. This is characterised by the persistent desire to use the drug and [url=https://www.amberton.edu/media/Syllabi/Spring 2022/Graduate/CSL6798_E1.pdf]disruption to daily activities[/url], such as work or education. It has been estimated that approximately 10% of cannabis users meet the diagnostic criteria for this disorder.
In our research, we tested the cognition of 39 people with the disorder (asked to be clean on the day of testing), and compared it with that of 20 people who never or rarely used cannabis.
We showed that participants with the condition had significantly worse performance on memory tests from the Cambridge Neuropsychological Test Automated Battery (CANTAB) compared to the controls, who had either never or very rarely used cannabis. It also negatively affected their “executive functions”, which are mental processes including flexible thinking.
This effect seemed to be linked to the age at which people started taking the drug – the younger they were, the more impaired their executive functioning was.
Cognitive impairments have been noted in mild cannabis users as well. Such users tend to make riskier decisions than others and have more problems with planning.
Although most studies have been conducted in males, there has been evidence of sex differences in the effects of cannabis use on cognition. We showed that, while male cannabis users had poorer memory for visually recognising things, female users had more problems with attention and executive functions.
These sex effects persisted when controlling for age; IQ; alcohol and nicotine use; mood and anxiety symptoms; emotional stability; and impulsive behaviour.

Cannabis use can also affect how we feel – thereby further influencing our thinking. For example, some previous research has suggested that reward and motivation – along with the brain circuits involved in these processes – can be disrupted when we use cannabis. This may affect our performance at school or work as it can make us feel less motivated to work hard, and less rewarded when we do well.
In our recent study, we used a brain imaging task, in which participants were placed in a scanner and viewed orange or blue squares. The orange squares would lead to a monetary reward, after a delay, if the participant made a response. This set up helped us investigate how the brain responds to rewards.
We focused particularly on the ventral striatum, which is a key region in the brain’s reward system. We found that the effects on the reward system in the brain were subtle, with no direct effects of cannabis in the ventral striatum.
However, the participants in our study were moderate cannabis users. The effects may be more pronounced in cannabis users with more severe and chronic use, as seen in cannabis use disorder.
There is also evidence that cannabis can lead to mental health problems. We have shown that it is related to higher “anhedonia” – an inability to feel pleasure – in adolescents. Interestingly, this effect was particularly pronounced during the COVID-19 pandemic lockdowns.
Cannabis use during adolescence has also been reported as a risk factor for developing psychotic experiences as well as schizophrenia.
One study showed that cannabis use moderately increases the risk of psychotic symptoms in young people, but that it has a much stronger effect in those with a predisposition for psychosis (scoring highly on a symptom checklist of paranoid ideas and psychoticism). 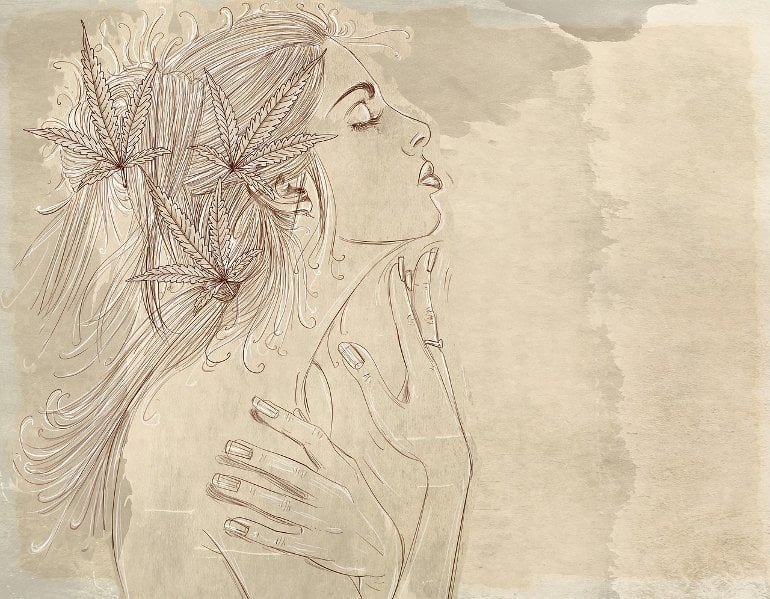 Tetrahydrocannabinol (THC) is the main psychoactive compound in cannabis. Image is in the public domain
Assessing 2,437 adolescents and young adults (14-24 years), the authors reported a six percentage points increased risk – from 15% to 21% – of psychotic symptoms in cannabis users without a predisposition for psychosis. But there was a 26-point increase in risk – from 25% to 51% – of psychotic symptoms in cannabis users with a predisposition for psychosis.
We don’t really know why cannabis is linked to psychotic episodes, but hypotheses suggests dopamine and glutamate [url=https://www.ncbi.nlm.nih.gov/pmc/articles/PMC4902122/#:~:text=The glutamate and dopamine hypotheses,from in vivo imaging studies.]may be important[/url] in the neurobiology of these conditions.
Another study of 780 teenagers suggested that the association between cannabis use and psychotic experiences was also linked to a brain region called the “uncus”. This lies within the parahippocampus (involved in memory) and olfactory bulb (involved in processing smells), and has a large amount of cannabinoid receptors. It has also previously been associated with schizophrenia and psychotic experiences.
Cognitive and psychological effects of cannabis use are ultimately likely to depend to some extent on dosage (frequency, duration and strength), sex, genetic vulnerabilities and age of onset. But we need to determine whether these effects are temporary or permanent. One article summarising many studies has suggested that with mild cannabis use, the effects may weaken after periods of abstinence.
But even if that’s the case, it is clearly worth considering the effects that prolonged cannabis use can have on our minds – particularly for young people whose brains are still developing.
Funding:
Barbara Jacquelyn Sahakian receives funding from the Leverhulme Trust and the Lundbeck Foundation. Her research work is conducted within the NIHR Cambridge Biomedical Research Centre (BRC) Mental Health and Neurodegeneration Themes and the NIHR MedTech and in vitro diagnostic Co-operative (MIC). She consults for Cambridge Cognition.
Christelle Langley is funded by the Leverhulme Trust.
Martine Skumlien receives funding from the Aker Foundation.
Tianye Jia receives funding from the National Natural Science Foundation of China.

» Cannabis Saved Our Granddaughter’s Life, So We Donated $33.7 Million to Medical Cannabis Research
» Mindfulness May Provide Small But Significant Benefits to Cognition
» Cannabis Paste V.S Cannabis Oil- Alcohol V.S Vegetable Glycerin
» How to make cannabis oil with a Distiller (Cannabis oil cures cancer.MORE at cureyourowncancer.org)
» Confession of a Doctor Who Drank Cannabis Oil: “I Had Cancer, Cannabis Oil Brought My Life Back”