Father Launches Billboard Campaign to Tell the World His Son Was Killed by the Pfizer Vaccine Mon Apr 18, 2022 10:03 am

Source: Free Thought Project – by Matt Agorist
The multi-billion dollar pharma giant with an incredibly tainted past, who has seen exponential profits during the pandemic as a result of taxpayers being forced to pay for the jab, has also enjoyed billions in taxpayer dollars to advertise said jab.
The windfall of profits realized from vaccinating adults using propaganda and mandates quickly turned the company’s sights to children as their customer base waned as people realized the vaccine did not protect you from getting covid.
Despite children facing a near zero chance of dying from COVID-19, the FDA jumped on board and quickly approved Pfizer’s mRNA vaccine for children ages 5-11 last year.
Governments across the country then began requiring children to get the jab to go to school and researchers began to see an increase in myocarditis.

Since the vaccine was approved in December 2020, there has been a record number of adverse reactions reported to the CDC and many of them include children. As the following example illustrates, when those children are injured, their parents are censored for speaking out about it.
Ernesto Ramirez Jr. was one of hundreds of children who took the jab early on. Sadly, however, unlike others, he did not survive and five days after the shot, according to his father, Ernesto dropped dead.
“I kept hearing more advertisements about how it was safe for the teenagers, so I said ‘OK,’” Ernesto’s father, Ernesto Ramirez told Fox 26 Houston journalist Ivory Hecker earlier this year. “Two or three weeks later the CDC started announcing children were having enlarged hearts.”
“A typical heart for a boy this age would be less than 250 grams,” said Dr. Peter McCullough, a Dallas physician featured in Hecker’s video. “In this case it was more than 500 grams.”

Ramirez tried to raise money for his deceased son’s funeral but because he claimed the jab killed his son, GoFundMe deleted it.


Since his son died, Ramirez has been facing an uphill battle of censorship and hatred. Many folks online are angry with Ramirez for telling people that the vaccine caused his son’s death. But this hasn’t stopped this single father. Instead, it’s made him go harder.
This week, he launched a billboard to tell people what happened to his son and unless the censors have a giant black sheet and a crane, lots of people will see this sign.

My baby boy story is getting out 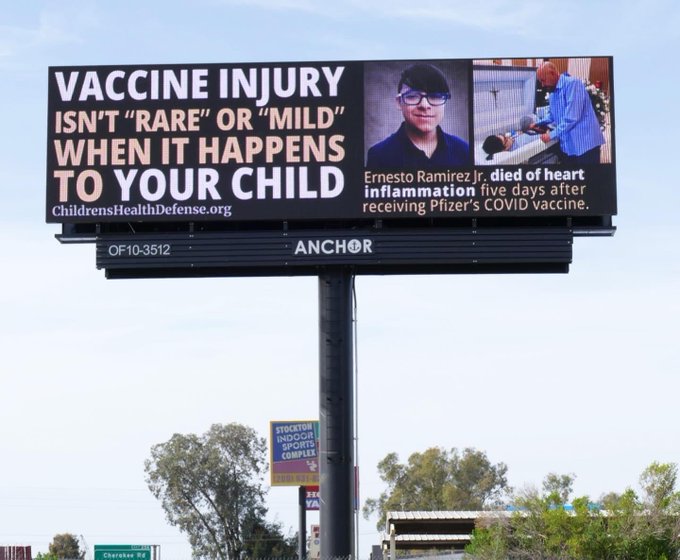 For the last couple of months, Ramirez has been travelling the country, telling people his story, and the censorship class is unable to stop him.
Another one of those children — who participated in the Pfizer trial and was severely injured — is Maddie de Garay, who received the Pfizer vaccine when she was 12. She is now is in a wheelchair.
Like Ramirez, Maddie’s family made an advertisement to tell her story about her experience with the vaccine. Unfortunately, however, Maddie’s ad is and has been actively censored.

What’s more, Comcast pulled the ad last year as it was slated to run before the FDA’s Vaccines and Related Biological Products Advisory Committee met to discuss COVID-19 vaccines for children.
Despite the censorship, Maddie’s ad went viral on other platforms and received significant coverage in the independent media, including this outlet.

Apparently, according to big tech, only those who praise the vaccine’s efficacy — even if that praise is false — are allowed a platform. If you or your child was injured by it, you have no right to speak.
As Ramirez and the de Garay families illustrate, big tech is having an increasingly harder time keeping a lid on this information. And that is inspiring.