OUT OF MIND » THE INSANITY OF REALITY » GOVERNMENTS & THE NEW WORLD ORDER » Of All The Questions About Hunter Biden’s Laptop, Why Hasn’t This One Been Answered?

Of All The Questions About Hunter Biden’s Laptop, Why Hasn’t This One Been Answered?

Source: A guest post by Gen Z of Blue State Conservative.
There are a lot of questions about the Hunter Biden laptop, particularly now that it has been proven to be real pretty much beyond any shadow of a doubt. Perhaps a few crazy blue-hairs and journos still think it’s fake news or Russian disinformation or whatever, but anyone with a few brain wrinkles can, at this point see that it’s real.
But, while its authenticity has been verified and the contents of the laptop from hell are starting to be investigated, there’s a question about the whole thing that still doesn’t seem to have been satisfactorily answered, one that Eric Matheny asked on Twitter.
That is: why the hell would Hunter catalog everything he’s done wrong (or, if not everything, at least a good chunk of misfeasance and malfeasance), and then just leave the computer with all those misdeeds sitting in some repair shop without paying the guy or picking up the computer? Or, as Eric Matheny put it, “Who records all of their evils on laptops and then proceeds to repeatedly lose those laptops?”


Who records all of their evils on laptops and then proceeds to repeatedly lose those laptops?
2:21 PM · Apr 12, 2022

Now, there’s a likely answer: Hunter, being a crackhead at one point in his life and coming from a family known for not paying its bills, was just too out of it or too unconcerned to pick up the laptop. Fair enough. But, still, it’s weird that it even existed in the first place.

“The laptop’s hard drive contained a trove of emails, text messages, photos and financial documents between Hunter Biden, his family and business associates — detailing how the president’s son used his political leverage in his overseas business dealings.”

The original NYP article on the subject claimed:

“The blockbuster correspondence — which flies in the face of Joe Biden’s claim that he’s “never spoken to my son about his overseas business dealings” — is contained in a massive trove of data recovered from a laptop computer.”

And in addition to those business-related topics, there were also more debauched photos on the laptop, including the infamous one of Hunter with what looks like a crack pipe. Describing the details of the laptop that are lesser-known, a whistleblower who’s fled to Switzerland said:

“We found 450 gigabytes of erased material on Hunter Biden’s laptop. This includes 80,000 images and videos. This includes hundreds of emails concerning Metabiota. It also includes some things, I guess we can get into along the way, but it’s absolutely frightening. Everybody has been lied to, people of the world, particularly the Americans.”

Maybe he’s full of bullschiff, maybe he’s telling the truth. Even if all that’s true is what the NYP originally reported, it’s still weird that Hunter kept all that stuff on a laptop and then deserted the laptop with those savory secrets in it at some random computer repair shop. 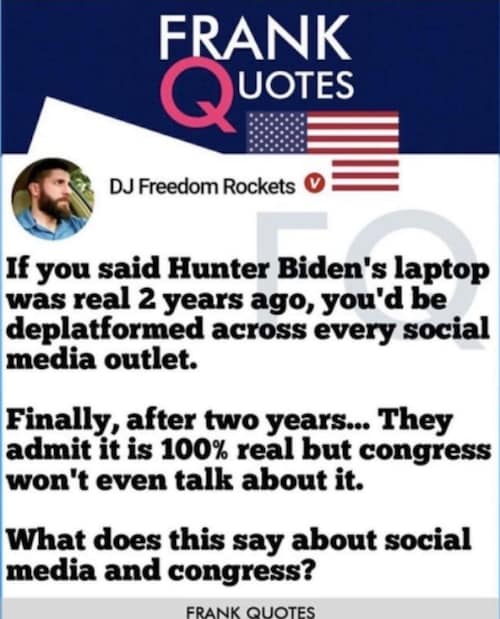 OUT OF MIND » THE INSANITY OF REALITY » GOVERNMENTS & THE NEW WORLD ORDER » Of All The Questions About Hunter Biden’s Laptop, Why Hasn’t This One Been Answered?