OUT OF MIND » THE INSANITY OF REALITY » SCIENCE & TECHNOLOGY » Time Might Not Actually Exist, Researchers Say

In a new book published by the Oxford University Press, Australian Catholic University’s Dr. Sam Baron and his colleagues provide the first systematic analysis of the idea that time does not exist. 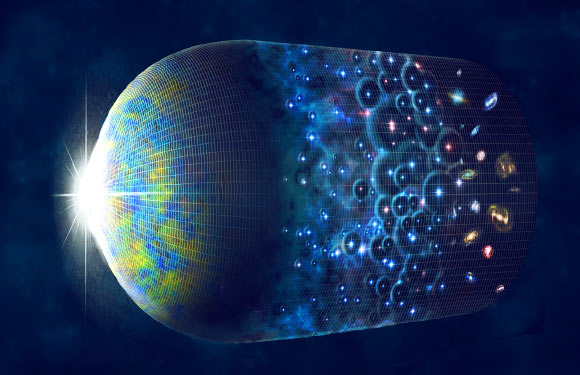 This artist’s impression shows the evolution of the Universe beginning with the Big Bang on the left followed by the appearance of the Cosmic Microwave Background. The formation of the first stars ends the cosmic dark ages, followed by the formation of galaxies. Image credit: M. Weiss / Harvard-Smithsonian Center for Astrophysics.
Does time exist? The answer to this question may seem obvious: of course it does! Just look at a calendar or a clock.
But developments in physics suggest the non-existence of time is an open possibility, and one that we should take seriously.
How can that be, and what would it mean? It’ll take a little while to explain, but don’t worry: even if time doesn’t exist, our lives will go on as usual.
Crisis in Physics
Physics is in crisis. For the past century or so, we have explained the Universe with two wildly successful physical theories: general relativity and quantum mechanics.
Quantum mechanics describes how things work in the incredibly tiny world of particles and particle interactions. General relativity describes the big picture of gravity and how objects move.
Both theories work extremely well in their own right, but the two are thought to conflict with one another. Though the exact nature of the conflict is controversial, scientists generally agree both theories need to be replaced with a new, more general theory.
Physicists want to produce a theory of ‘quantum gravity’ that replaces general relativity and quantum mechanics, while capturing the extraordinary success of both. Such a theory would explain how gravity’s big picture works at the miniature scale of particles.
Time in Quantum Gravity
It turns out that producing a theory of quantum gravity is extraordinarily difficult.
One attempt to overcome the conflict between the two theories is string theory. String theory replaces particles with strings vibrating in as many as 11 dimensions.
However, string theory faces a further difficulty. String theories provide a range of models that describe a Universe broadly like our own, and they don’t really make any clear predictions that can be tested by experiments to figure out which model is the right one.
In the 1980s and 1990s, many physicists became dissatisfied with string theory and came up with a range of new mathematical approaches to quantum gravity.
One of the most prominent of these is loop quantum gravity, which proposes that the fabric of space and time is made of a network of extremely small discrete chunks, or ‘loops.’
One of the remarkable aspects of loop quantum gravity is that it appears to eliminate time entirely.
Loop quantum gravity is not alone in abolishing time: a number of other approaches also seem to remove time as a fundamental aspect of reality.
Emergent Time
So we know we need a new physical theory to explain the Universe, and that this theory might not feature time.
Suppose such a theory turns out to be correct. Would it follow that time does not exist?
It’s complicated, and it depends what we mean by exist.
Theories of physics don’t include any tables, chairs, or people, and yet we still accept that tables, chairs and people exist.
Why? Because we assume that such things exist at a higher level than the level described by physics.
We say that tables, for example, ‘emerge’ from an underlying physics of particles whizzing around the Universe.
But while we have a pretty good sense of how a table might be made out of fundamental particles, we have no idea how time might be ‘made out of’ something more fundamental.
So unless we can come up with a good account of how time emerges, it is not clear we can simply assume time exists.
Time might not exist at any level.
Time and Agency
Saying that time does not exist at any level is like saying that there are no tables at all.
Trying to get by in a world without tables might be tough, but managing in a world without time seems positively disastrous.
Our entire lives are built around time. We plan for the future, in light of what we know about the past. We hold people morally accountable for their past actions, with an eye to reprimanding them later on.
We believe ourselves to be agents (entities that can do things) in part because we can plan to act in a way that will bring about changes in the future.
But what’s the point of acting to bring about a change in the future when, in a very real sense, there is no future to act for?
What’s the point of punishing someone for a past action, when there is no past and so, apparently, no such action?
The discovery that time does not exist would seem to bring the entire world to a grinding halt. We would have no reason to get out of bed.
Business as Usual
There is a way out of the mess.
While physics might eliminate time, it seems to leave causation intact: the sense in which one thing can bring about another.
Perhaps what physics is telling us, then, is that causation and not time is the basic feature of our Universe.
If that’s right, then agency can still survive. For it is possible to reconstruct a sense of agency entirely in causal terms.
At least, that’s what Kristie Miller, Jonathan Tallant and I argue in our new book.
We suggest the discovery that time does not exist may have no direct impact on our lives, even while it propels physics into a new era.
_____
Samuel Baron, Kristie Miller, and Jonathan Tallant. 2022. Out of Time: A Philosophical Study of Timelessness. Oxford University Press
Author: Sam Baron, associate professor at the Australian Catholic University.
This article was originally published on The Conversation.

OUT OF MIND » THE INSANITY OF REALITY » SCIENCE & TECHNOLOGY » Time Might Not Actually Exist, Researchers Say

» Time crystals might exist after all
» Did Time Exist Before The Universe?
» Truth Will Set You Free: Time Does Not Exist
» Portals Do Exist Announced NASA There For Time Travel Is A Distinct Possibility
» TIME TRAVEL & STARGATE PORTALS ARE REAL AND EXIST TODAY - HERE IS THE PROOF