Key Components of DNA and RNA Found in Three Meteorites

Key Components of DNA and RNA Found in Three Meteorites 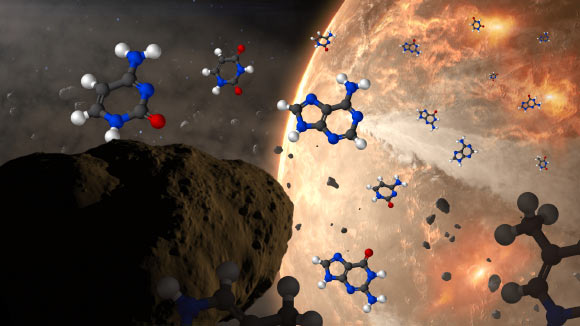 Conceptual image of meteoroids delivering nucleobases to ancient Earth. The nucleobases are represented by structural diagrams with hydrogen atoms as white spheres, carbon as black, nitrogen as blue and oxygen as red. Image credit: NASA’s Goddard Space Flight Center / CI Lab / Dan Gallagher.
Two types of chemical building blocks, or nucleobases, are needed to form DNA and RNA.
These are the pyrimidines, which include cytosine, uracil and thymine, and the purines, for example guanine and adenine.
Thus far, only purine nucleobases and uracil have been identified in meteorites.
However, Hokkaido University’s Dr. Yasuhiro Oba and colleagues identified the final two nucleobases that have eluded scientists.
“I wonder why purines and pyrimidines are exceptional in that they do not show structural diversity in carbonaceous meteorites unlike other classes of organic compounds such as amino acids and hydrocarbons,” Dr. Oba said.
“Since purines and pyrimidines can be synthesized in extraterrestrial environments, as has been demonstrated by our own study, one would expect to find a wide diversity of these organic molecules in meteorites.”
“We now have evidence that the complete set of nucleobases used in life today could have been available on Earth when life emerged,” added Dr. Danny Glavin, a researcher at NASA’s Goddard Space Flight Center.
The newly-discovered pair of nucleobases, cytosine and thymine, have been elusive in previous analyses likely because of their more delicate structure, which may have degraded when scientists previously extracted samples.
In the earlier experiments, scientists created something of a ‘meteorite tea,’ placing grains of meteorite in a hot bath to let the molecules on the sample extract into the solution and then analyzed the molecular makeup of the extraterrestrial broth.
“We study these water extracts since they contain the good stuff, ancient organic molecules that could have been key building blocks for the origin of life on Earth,” Dr. Glavin said.
Because of how delicate these two nucleobases are, the study authors were initially skeptical to see them in the samples.
But two factors may have contributed to the new discovery: first, they used cool water to extract the compounds instead of hot formic acid — which is very reactive and could have destroyed these fragile molecules in previous samples. Second, more sensitive analytics were employed that could pick up on smaller amounts of these molecules.
The finding doesn’t provide a smoking gun as to whether life on Earth got an assist from space or came about exclusively in the prebiotic soup in the planet’s infancy.
But completing the set of nucleobases that make up life today, in addition to other molecules found in the sample, gives scientists who are trying to understand the beginning of life more compounds to experiment with in the lab.
“This is adding more and more pieces; meteorites have been found to have sugars and bases now,” said Dr. Jason Dworkin, a researcher at NASA’s Goddard Space Flight Center.
“It’s exciting to see progress in the making of the fundamental molecules of biology from space.”
The results were published in the journal Nature Communications.
_____
Y. Oba et al. 2022. Identifying the wide diversity of extraterrestrial purine and pyrimidine nucleobases in carbonaceous meteorites. Nat Commun 13, 2008; doi: 10.1038/s41467-022-29612-x