Source: Redstate.com
Elon Musk has vowed to fire all ‘Deep State’ Twitter executives who deliberately spread the Trump-Russia collusion hoax while suppressing the Hunter Biden ‘Laptop from Hell’ story.
Earlier this week, Musk slammed Twitter’s top lawyer Vijaya Gadde for spreading propaganda for the Democratic Party. Gadde was also responsible for banning Donald Trump and censoring the Hunter Biden laptop story.
Yesterday Musk also responded to the fact that Russian collusion hoaxer Jim Baker, former FBI employee and now Twitter executive, set up the meeting that Michael Sussmann used to spread the false Alfa Bank story.
Redstate.com reports: Here are both those exchanges brought to you by a “journalist” from The Washington Post who apparently finds it really bad that Musk would call out obvious corruption regarding Twitter employees.

Elon Musk has now publicly agreed with and amplified criticisms from the right of two individual Twitter employees today— one accusing its top policy exec of “censorship” and the other accusing a company lawyer of facilitating fraud. 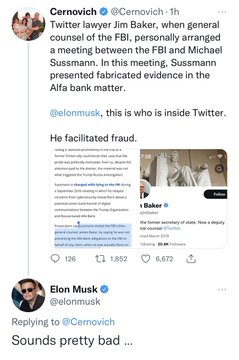 Can I start by noting that the double standard in response to Musk calling out bad actors is just amazing? These are the same journos who cheered on the doxxing of Libs of TikTok. They didn’t once suggest that Taylor Lorenz had gone too far nor did they express concern about the online harassment Libs of TikTok received. Yet, the moment that Musk simply says “Yes, bad things are bad,” the same journos get really concerned about online harassment. Weird, right? It’s almost as if journalists only care about things that reinforce their political viewpoints.


Regardless, I think Musk responding to both those stories is important. It points to big changes coming at Twitter. Some on the right who are more cynical speculated that he’d come in and maintain the status quo. If that were true, he wouldn’t be publicly calling out figures like Gadde and Baker, both of whom currently hold major leadership roles within the company.
Clearly, Musk didn’t spend $44 billion to let Twitter keep operating as a leftwing mouthpiece, banning speech that doesn’t fit the narrative. And while he’s not officially in charge yet, when the keys are handed over, you can expect him to burn the place down in regards to personnel. Jim Baker absolutely has to go. Vijaya Gadde, the brains behind Twitter’s censorship, has to go.
Yes, there will be pushback and hair set on fire, mostly from the mainstream media. But seeing Musk’s recent comments has given me confidence he can handle it. The left knows that it is losing. They feel their grip on power slipping away, both electorally and in regards to free speech. Musk is just the man to keep that train rolling.