OUT OF MIND » VOICES CARRY » AMAZING PEOPLE, PLACES & THINGS » Teen with a fishing magnet found a safe full of cash. And then he returned it all to its owner.

Teen with a fishing magnet found a safe full of cash. And then he returned it all to its owner. 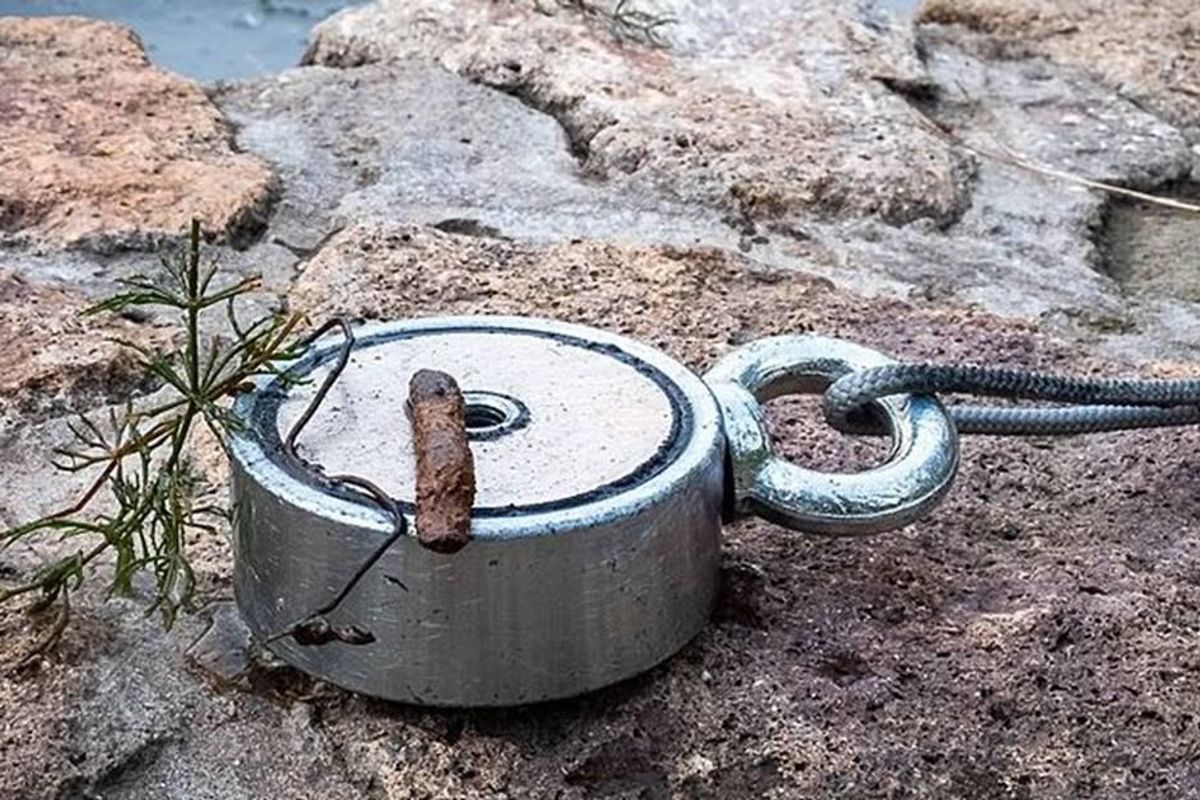 via Wikimedia Commons
It's incredible what a double-sided magnet can do.
A new trend in treasure hunting called magnet fishing has blown up over the past two years, evidenced by an explosion of YouTube channels covering the hobby. Magnet fishing is a pretty simple activity. Hobbyists attach high-powered magnets to strong ropes, drop them into waterways and see what they attract.
The hobby has caught the attention of law enforcement and government agencies because urban waterways are a popular place for criminals to drop weapons and stolen items after committing a crime. In 2019, a magnet fisherman in Michigan pulled up an antique World War I mortar grenade and the bomb squad had to be called out to investigate.
Fifteen-year-old George Tindale and his dad, Kevin, 52, of Grantham, Lincolnshire in the U.K., made an incredible find earlier this month when they used two magnets to pull up a safe that had been submerged in the River Witham.
George has a popular magnet fishing YouTube channel called “Magnetic G.”

After the father-and-son duo pulled the safe out of the murky depths, they cracked it open with a crowbar and found about $2,500 Australian dollars (US$1,800), a shotgun certificate and credit cards that expired in 2004. The Tindales used the name found on the cards to find the safe’s owner, Rob Everett.
Everett’s safe was stolen during an office robbery in 2000 and then dumped into the river. “I remember at the time, they smashed into a cabinet to get to the safe,” Everett said, according to The Daily Mail. “I was just upset that there was a nice pen on my desk, a Montblanc that was never recovered.”

The robber, who was a teenage boy, was apprehended soon after the crime because he left behind a cap with his name stitched inside.
The father and son met up with Everett to return his stolen money and the businessman gave George a small reward for his honesty. He also offered him an internship because of the math skills he displayed in the YouTube video when he counted the Australian dollars. “What’s good about it is, I run a wealth management company and… I’d love him to work for us," Everett said.
Although the safe saga began with a robbery 22 years ago, its conclusion has left Everett with more faith in humanity.
“I was just amazed that they’d been able to track me down,” he said. “There are some really nice and good people in this world. They could have kept the money, they could have said they attempted to get hold of me.”
“There’s a big lesson there. It teaches George that doing good and being honest and giving back is actually more rewarding than taking,” Everett added.
Treasure hunting isn’t the only allure of the hobby for George. His mother says the hobby has taught him a lot about water pollution and its effects on local wildlife. “George is very environmentally conscious. He always has been since primary school,” she said. “When he first started to do this, he was after treasure. Everything ends up in the rivers and canals.”

OUT OF MIND » VOICES CARRY » AMAZING PEOPLE, PLACES & THINGS » Teen with a fishing magnet found a safe full of cash. And then he returned it all to its owner.

» Sea Lion Pup Found On The Streets Of San Francisco Is Rescued: ‘Rubbish’ Will Be Fattened Up And Returned Home
» Wait Til You See What This Cat’s Owner Found Him Doing. And The Best Part? It Happens Every Day.
» Simon Parkes is Full of SH*T - says “5G in the U.S. will be safe”
» The Wall Street Conspiracy Full Movie Free Online With Permission of Owner - Producer
» Dr. Robert Malone drops bomb, reveals top owner of Spotify is also top owner of COVID vaccine maker Moderna