Why experts weep for the quiet and beautiful Hawaiian po’ouli

Frantic conservation efforts couldn’t save the tiny, intricately colored songbird, whose obit is the first in our new series of memorials for species that have gone extinct in living memory 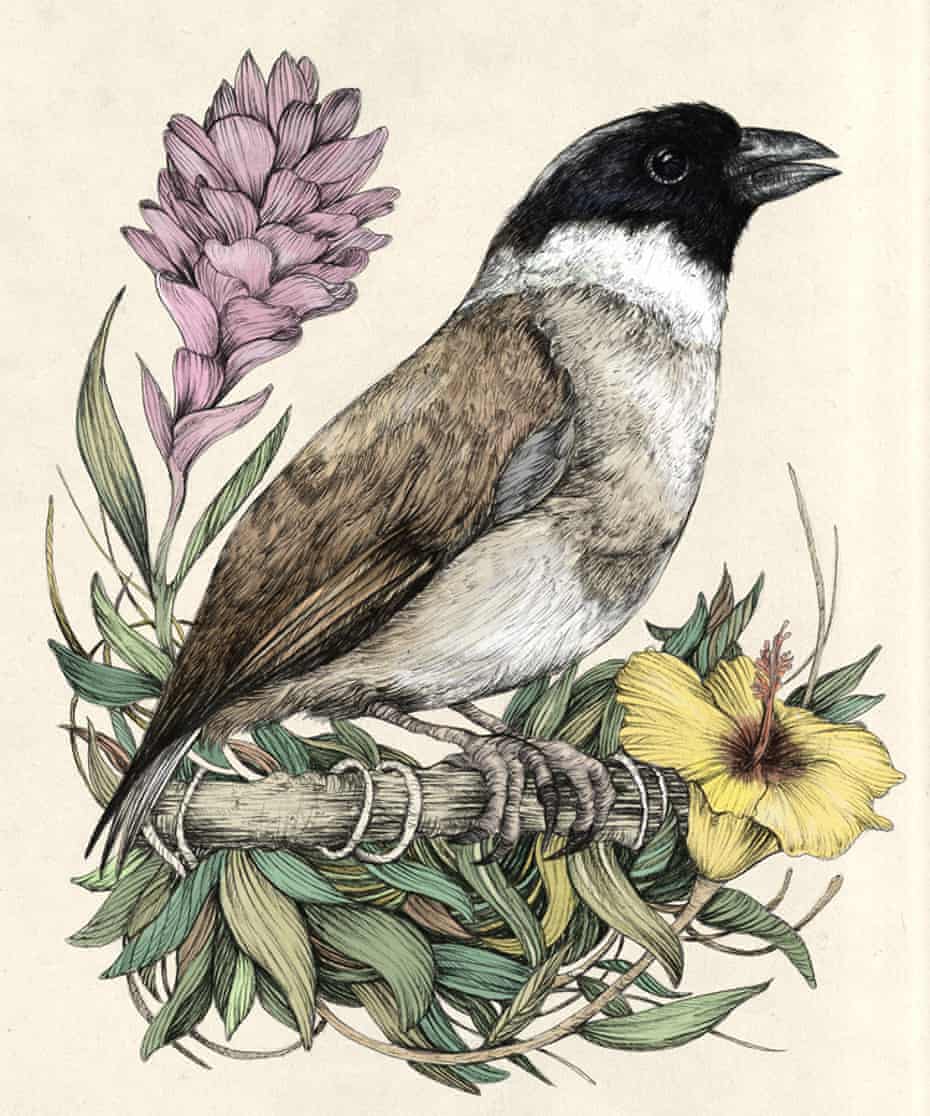 The Hawaiian po’ouli: ‘I’m crying for it again now.’

Illustration: Ricardo Macia Lalinde/The Guardian
The age of extinction is supported by
About this content
Helen Sullivan
@helenrsullivanWed 4 May 2022 03.00 EDT

The last po’ouli died in an unusual nest. Too weak to perch, the brownish-greyish songbird rested in a small towel twisted into a ring. He was the last of his species, the last in fact of an entire group of finches, and occurred nowhere on Earth outside its native Hawaii. For weeks, as scientists tried to find him a mate, he had been getting sicker. The only remaining po’ouli had just one eye. Alone in the towel, alone in all the world, he closed it.
He was born, like all po’ouli (pronounced po-oh-oo-lee), in Maui’s Hana rainforest, on the slopes of Mount Haleakalā – “house of the sun” – where it rains all the time. Also known as the blackfaced honeycreeper, his species was discovered in 1973. Then, researchers estimated the total population at 200 birds.
Scholar Mary Kawena Pukui gave the bird its name, meaning “black head”. Her book of Hawaiian proverbs includes this one: Hāhai nō ka ua i ka ululāʻau, “the rain follows the forest”. The phrase has a double meaning: it is a hint and warning. To find water, look for forests. But also: should one element of an ecosystem be destroyed, others will surely follow.
By 1997, just five po’ouli remained. That year, on an unusually bright day, researchers caught one for the first time. It had taken Paul Baker, a British ecologist a long way from home, half of every month for two years. Climbing up and down Mount Haleakalā’s muddy hills meant that at just 33, he would soon need a knee operation. But it was worth it.https://interactive.guim.co.uk/uploader/embed/2022/05/archive-zip/giv-6562Mm6IC253vTig/
After untangling the po’ouli from a mist net, Baker took the bird’s measurements and charted its colours. The po’ouli weighed just 26.2g, or less than 1oz. The shades of his brown feathers alone included umber, raw sepia, ground colour sepia, warm sepia, sienna, antique brown, cinnamon, dark cinnamon, hair brown, mars brown, warm buff, olive brown, Prout’s brown, Vandyke brown, Natal brown, Verona brown, army brown and dull brown-black.
Holding the po’ouli in one hand, Baker photographed him with the other: the bird is seen upright and from the back, his head turned to the side, as though modelling a coat worn just off his shoulders. Baker released the po’ouli, but the bird stuck around. From a branch six feet away he looked at the man as if to say, “Who are you? What have you just done? What are you?”
Then the po’ouli flew off into the rainforest. What we know about how he and the rest of his species spent their time there is very little. They flew and foraged and slept through almost 500 inches of rain (12 times the average annual rainfall of New York state). The quietest of all Hawaiian honeycreepers, they rarely sang or chirped. They ate small land snails, beetles and butterfly larvae.
But snails had been growing harder to find, thanks to European domestic pigs and black rats who disturbed the forest floor where birds foraged. The pigs, the rats, cats and mongoose who probably preyed on po’ouli and their eggs were all brought to the island decades earlier by humans, as were mosquitoes, which carry avian malaria. Invasive species have caused a third of the world’s extinctions since 1500. Hawaii alone has lost two-thirds of its endemic bird species.

By the new millennium, there were just three po’ouli left. Though they lived just a few kilometres from one another, they are unlikely ever to have met. Instead – perhaps out of loneliness, perhaps out of confusion – each spent time with yellowish, hook-beaked Maui parrotbills, which had a similar call.
Meanwhile, conservationists, ornithologists and ecologists sent frantic emails, held tense meetings and pulled each other aside at conferences, fretting and fighting over what to do and who would pay for it.
It took three years – or roughly a third of a po’ouli life – to reach a decision. In 2002, researchers captured what they hoped was a female. After feeding her two snails and 15 waxworms, they released her into the territory of what they believed was the last remaining male.
The transplanted female embarked on her blind date at dusk. At dawn, she began to fly home, as unaware of the male po’ouli’s existence as he was of hers.
In 2004, the po’ouli got one last chance. It took six people 18 months and $300,000 to catch a bird. It was, remarkably, the same individual that Baker had snared seven years previously, when he became the first person to hold a live po’ouli. In that time, the bird had lost an eye. He was old – at least nine – and found captivity stressful. He died in Maui 11 weeks later, between 10pm and 11.30pm, on 26 November, of multiple (tiny) organ failure.
He was the last po’ouli ever seen. Researchers hoping to catch a female could not find either of the remaining birds. In 2019, the International Union for Conservation of Nature declared the species extinct.
“When you get too involved with something like that, it can’t help but sort of change you personally,” said Baker recently. His voice wobbled and he began to cry.
“I’m actually really upset right now, thinking about it,” he said. “I remember the day I heard the bird had died and, stupid as it sounds, I wept for the species.” He sniffed. “And I’m crying for it again now, all these years later.”