Why We Must Spread the WHOLE Truth About the Jabs Even if Some of It Sounds Crazy
Date: May 8, 2022Author: Nwo Report

Some vaccine skeptics say “buyer beware” and don’t talk about the jabs. Most warn about the basic risks but nothing else. I believe we need to boldly tell the truth even if it’s controversial.

Source: JD Rucker
Back in 2013, I was approached by a prominent Christian movie producer about working with them on a new major project. It seemed like a wonderful opportunity that was right up my alley. But as we discussed the project further, it became clear that they were pushing a watered-down, milquetoast version of the Gospel that was meant to ease people into the faith.
“We can’t just walk around with hypodermic needles full of fire and brimstone and hope to reach people,” he told me. “Sometimes it’s best to feed them Flintstones Vitamins of the Bible so we can ease them into the faith.”
I wholeheartedly disagreed and did not join the project. We parted friends and I wished them the best, but I am much more of a fire and brimstone kind of guy, at least when it comes to spreading the truth. The Bible is wonderful as it is. We don’t need to water it down. They produced their series and it was very successful. I could only watch some of it because they accomplished their mission of putting out a very safe telling of the Biblical narrative.
The reason I bring this up is that we are faced with similar arguments being made about the Covid jabs. There is thankfully a growing number of Americans who are starting to see parts of the truth. Most importantly, they’re realizing they’ve been lied to from the start, that the vaccines are neither safe nor effective, and the powers-that-be seem to have an agenda that doesn’t really tie into healthcare other than using it as a vehicle for their machinations.
There are three camps of vaccine skeptics in America today. The first camp is somewhat indifferent. They aren’t getting jabbed or if they already have been, they’re not getting the boosters. But otherwise, they don’t talk about it. They take on the “buyer beware” attitude that releases them from being compelled to tell anyone what they know about the jabs.

The second group is the largest. Most of you who are reading this or listening to the latest episode of End Medical Tyranny fall into this category. You’re willing to share some of the truth such as VAERS data or lack of efficacy studies. You may even occasionally share some of the more controversial topics such as the belief that Covid and the jabs are two parts of a bioweapon. But the “crazy” stuff isn’t worth sharing even if you believe some or all of it.
I totally understand the thinking of people in this camp. It’s a strategic choice to focus on what’s mostly demonstrable rather than speculative. You believe if you tell people that there have been over a million adverse reactions reported to the CDC, you have the database to prove it. But if you say something like the jabs can induce acquired immune deficiency syndrome, you may lose their attention. They may start thinking you’re a wacko conspiracy theorist. You may blow the opportunity to change a heart and mind.
In other words, you believe in using the Flintstones Vitamins version of sharing vaccine skepticism. I hold zero grudges towards you if you’re in that camp. In fact, you may actually be right in your strategy. My experience is different, but that’s anecdotal.
For me, I want to spread everything we know. I want to tell them about the long conversation I had with Dr. Sherri Tenpenny about vaccine shedding last May. Why? Because this May, vaccine shedding was proven. It sounds crazy to think that people who are heavily vaccinated may be shedding some elements of their injections, or possibly the reactions from the body itself, onto the people around them. But just because it sounds crazy doesn’t mean it’s not true, nor does it mean we shouldn’t be sharing it.
There are lines. I’m not in favor of sharing every theory that pops up. I assess each one and determine whether or not it’s viable. If it seems possible, I’ll explore further. If it then seems likely, I’ll share it. Sometimes, I’ll pass on sharing information until I can get more corroboration. For example, I haven’t talked about the “snake venom” theory. It may be real, but I haven’t seen enough evidence to make it seem likely. So in a way, I suppose I still have one foot in camp two. My appetite to share EVERY hypodermic needle of a conspiracy theory about the jabs isn’t unquenchable.
Here are some of the more controversial topics that I stick in my “hypodermic needle of vaccine truth” that I share with as many people as possible:

I watch the other “fringe” theories as well, though I rarely spread them. It’s not because I’m shy about it or I fear being called a conspiracy theorist (a label I do not consider to be pejorative). It’s because I haven’t seen enough data telling me they’re likely. Theories about graphene hydroxide, 5G, snake venom, nanotechnology, and several others are all possible. As soon as I believe they’re likely, I’ll definitely share them. Until then, I’ll watch closely and wait for more evidence.
Through all of this, I haven’t fully explained why I believe sharing all of the truth is better than simply sharing the less controversial stuff for the sake of strategy. I’ve seen the difference between coaxing and adamantly demanding that people wake up. I believe that anyone who I couldn’t “ease into” a state of vaccine skepticism may have been better served with a hypodermic needle full of vaccine truth. Conversely, anyone who we wake up with the Flintstones Vitamin version likely would have still been woken up by the hypodermic needle.
To me, we can convince ourselves that it’s better to not sound like a conspiracy theorist for the sake of better spreading the truth, but I challenge that notion. I believe that easing in for the sake of strategy is an excuse that allows us to not get labeled as crazy. This brings us to the argument Senator Ron Johnson made on this very topic. According to the Wisconsin Examiner:
In a video interview published on the right-wing social media platform Rumble, Sen. Ron Johnson said it “may be true” that vaccines against COVID-19 cause AIDS.
Johnson was being interviewed by anti-vaccine lawyer Todd Callender, who alleged that the shots induce AIDS and that the FDA knew so when the vaccines were approved for emergency use.
“The way to approach this is from a criminal point of view because that’s what has happened. And until we start holding people accountable, [Dr. Anthony] Fauci number one, you’re going to see people still falling out, still getting sick,” Calendar said. “You’ve got more than a hundred doctors here, all of whom will tell you that these shots caused vaccine-induced AIDS. they purposefully gave people AIDS. They knew this.”
Johnson responded that it’s possible the allegations are true, but that anti-vaccine activists need to wait for public opinion to be on their side before criminally charging health officials.
“Let me challenge you there, that’s way down the road,” Johnson said. “You’ve gotta do one step at a time. Everything you say may be true, but right now the public views the vaccines as largely safe and effective, that vaccine injuries are rare and mild. That’s the narrative, that’s what the vast majority of the public accepts. So until we get a larger percentage of the population with their eyes open to ‘woah, these vaccine injuries are real, why?’ You’ve got to do it step by step, you can’t leap to crimes against humanity, you can’t leap to another Nuremberg trial.”

Senator Johnson made the case for easing people in, yet the Wisconsin Examiner and others in corporate media still pounced on the notion that he believes vaccine-induced AIDS may be real. Don’t get me wrong. Senator Johnson has done more to expose the truth about the vaccines than anyone else on Capitol Hill, so I don’t want to be too critical of him or ignore his unique position that must be protected. All I’m saying is that trying to sound “sane” while talking about this stuff will not keep the wolves from pouncing and it won’t help reach more people with the truth.
Here’s the segment of the interview in question:

On Rumble, anti-vaxxer Todd Callender says “[COVID] shots caused vaccine-induced AIDS. They purposefully gave people AIDS.” Ron Johnson: "You gotta do one step at a time. Everything you say may be true. But right now, the public views the vaccines as largely safe and effective." 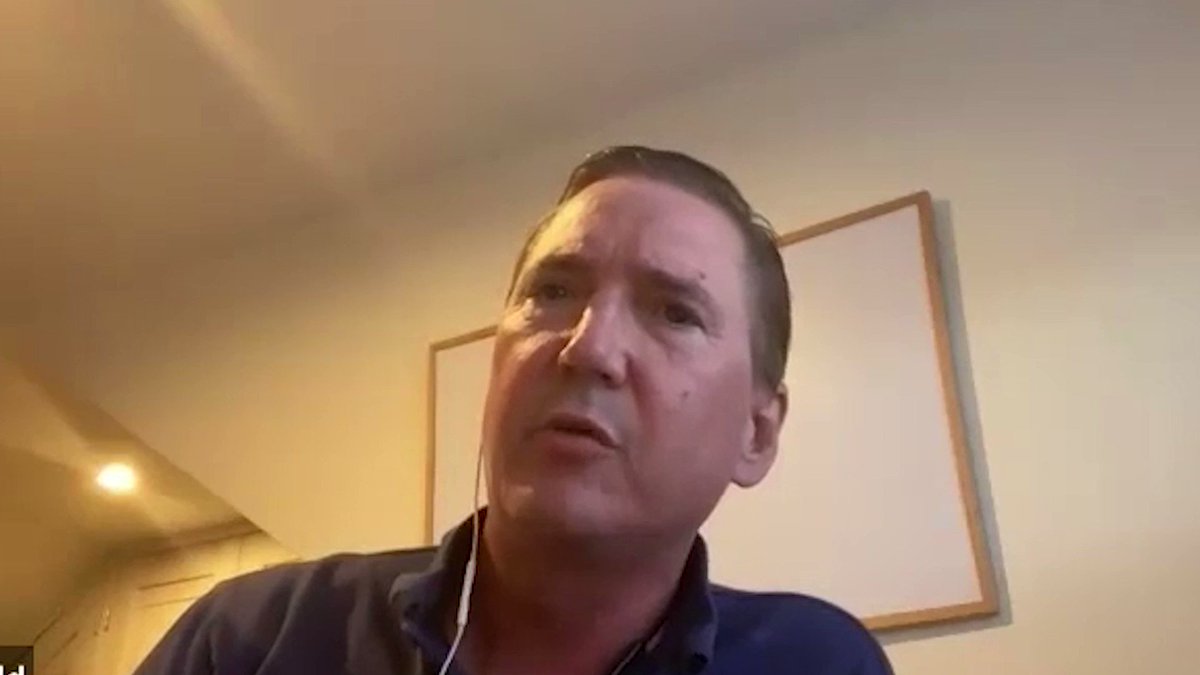 If you take the Flintstones Vitamin approach to spread vaccine truth, I’m okay with that. I disagree, but at least you’re doing more than most in corporate and even conservative media. We need the truth to come out now.

» Crazy sounds in the sky in Pennsylvania 12.02.2018
» Crazy Screaming and Trumpet Sounds are Back!
» Covid Jabs To Be Made Mandatory For Over-50s In Italy
» Are doctors failing to record bad reactions to Covid jabs?
» Official U.K. Lab Report: Covid-19 Jabs DO contain Graphene Oxide