In April 2019, the Event Horizon Telescope (EHT) Collaboration released stunning images of M87*, a 6.5-billion-solar-mass black hole in the center of the giant elliptical galaxy Messier 87, which is located some 53 million light-years from us in the constellation of Virgo. Now, a duo of astrophysicists at Columbia University has developed a new imaging technique that can help study black holes much smaller than M87*. 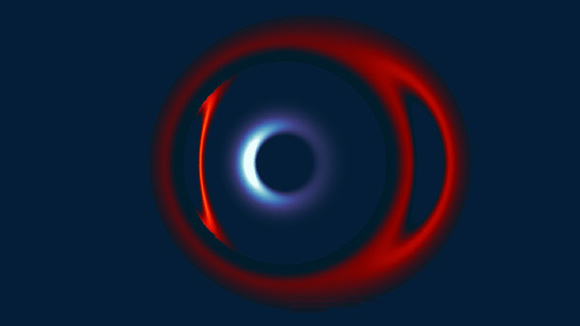 In this simulation of a supermassive black hole merger, the blue-shifted black hole closest to the viewer amplifies the red-shifted black hole in the back through gravitational lensing. Davelaar & Haiman discovered a distinct dip in brightness when the closest black hole passed in front of the shadow of its counterpart, an observation that could be used to measure the size of both black holes and test alternative theories of gravity. Image credit: Jordy Davelaar.
The new technique developed by Columbia University researchers Jordy Davelaar and Zoltan Haiman has just two requirements.
First, you need a pair of supermassive black holes in the throes of merging. Second, you need to be looking at the pair at a nearly side-on angle.
From this sideways vantage point, as one black hole passes in front of the other, you should be able to see a bright flash of light as the glowing ring of the black hole farther away is magnified by the black hole closest to you, a phenomenon known as gravitational lensing.
The lensing effect is well known, but what the researchers discovered here was a hidden signal: a distinctive dip in brightness corresponding to the shadow of the black hole in back.
This subtle dimming can last from a few hours to a few days, depending on how massive the black holes, and how closely entwined their orbits.
If you measure how long the dip lasts, the astrophysicists said, you can estimate the size and shape of the shadow cast by the black hole’s event horizon, the point of no exit, where nothing escapes, not even light.
“It took years and a massive effort by dozens of scientists to make that high-resolution image of the Messier 87 black holes,” Dr. Davelaar said.
“That approach only works for the biggest and closest black holes — the pair at the heart of Messier 87 and potentially our own Milky Way.”
“With our technique, you measure the brightness of the black holes over time, you don’t need to resolve each object spatially. It should be possible to find this signal in many galaxies.”
“That dark spot tells us about the size of the black hole, the shape of the space-time around it, and how matter falls into the black hole near its horizon,” Professor Haiman said.

The researchers became interested in flaring supermassive black holes after spotting a suspected pair of supermassive black holes at the center of KIC 11606854 (nicknamed Spikey), a galaxy in the early Universe.
NASA’s Kepler space telescope was scanning for the tiny dips in brightness corresponding to a planet passing in front of its host star. Instead, Kepler ended up detecting the flares of what the scientists claim are a pair of merging black holes.
To learn more about the flares, the authors built a model. They were confused, however, when their simulated pair of black holes produced an unexpected, but periodic, dip in brightness each time one orbited in front of the other.
At first, they thought it was a coding mistake. But further checking led them to trust the signal.
As they looked for a physical mechanism to explain it, they realized that each dip in brightness closely matched the time it took for the black hole closest to the viewer to pass in front of the shadow of the black hole in back.
They are currently looking for other telescope data to try and confirm the dip they saw in the Kepler data to verify that Spikey is, in fact, harboring a pair of merging black holes.
If it all checks out, the technique could be applied to a handful of other suspected pairs of merging supermassive black holes among the 150 or so that have been spotted so far and are awaiting confirmation.
As more powerful telescopes come online in the coming years, other opportunities may arise.
“Even if only a tiny fraction of these black hole binaries has the right conditions to measure our proposed effect, we could find many of these black hole dips,” Dr. Davelaar said.
The results appear in two papers in the journal Physical Review Letters and the journal Physical Review D.
_____
Jordy Davelaar & Zoltán Haiman. 2022. Self-Lensing Flares from Black Hole Binaries: Observing Black Hole Shadows via Light Curve Tomography. Phys. Rev. Lett 128 (19): 191101; doi: 10.1103/PhysRevLett.128.191101
Jordy Davelaar & Zoltán Haiman. 2022. Self-lensing flares from black hole binaries: General-relativistic ray tracing of black hole binaries. Phys. Rev. D 105 (10): 103010; doi: 10.1103/PhysRevD.105.103010