Spooky Discovery on Mars Looks Just Like an Alien Doorway

One of the most recent snaps beamed back from the Curiosity rover on Mars has revealed a rather interesting feature in the rocks: what looks to be a perfectly carved out doorway nestling in the Martian landscape.

The doorway doppelgänger is so eerily convincing we're almost tempted to start believing that it leads to a little hideaway for Martians, or perhaps a portal to another Universe entirely. We're also getting 'tunnel to the center of the planet' vibes from this.
At the very least, the picture and the geological feature it's captured would seem to be enough to inspire a science-fiction movie or two. 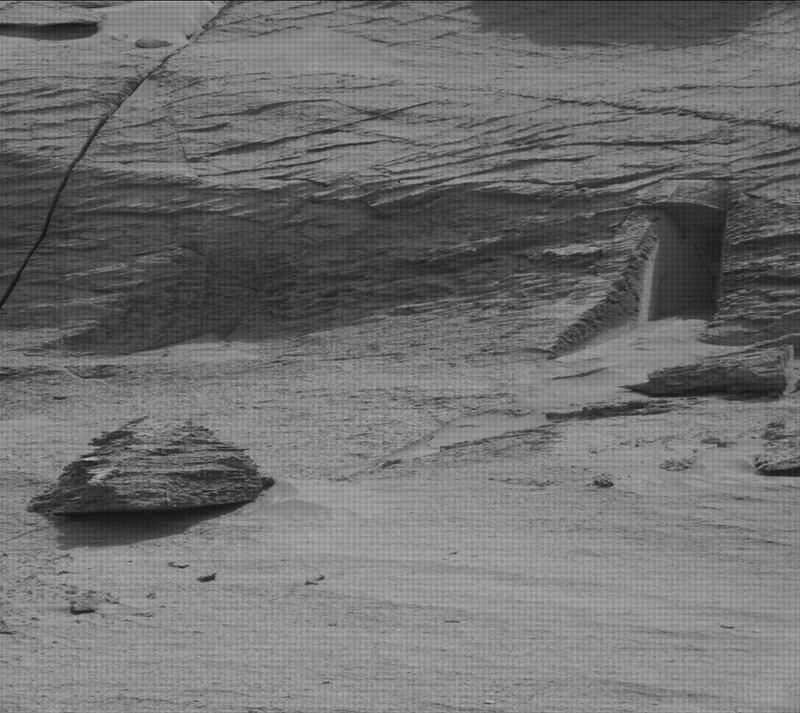 The door-like rock formation. (NASA/JPL-Caltech/MSSS)
However, the far more sensible people of Reddit have pointed to this likely being a shear fracture: the result of some kind of strain on the rock breaking part of it off, perhaps given a helping hand by a marsquake or two.
In fact, the largest temblor recorded on the red planet so far happened on May 4 of this year, and scientists are still working to pinpoint where exactly it happened and what caused it.
What's more, while the the door-like rock formation may appear to be full-sized in our imaginations, it's possible the cavity seen is only a few centimeters or inches tall in real life, though it's difficult to be certain from the picture.

You can see a bigger, colorized version of the original picture here. The doorway shape is up towards the top of the composite image, a little to the left of the center.
The image was taken at a geological feature known as Greenheugh Pediment, by the Mast Camera on board Curiosity, on 7 May 2022.
In the years that we've had access to close-ups of Mars from landers and orbiters, we've been treated to some truly weird and wonderful snapshots of the red planet: craters filled with ice, strange chevron-shaped rock formations, hollowed-out mountains and plenty more.
In terms of spooky discoveries in space that appear to resemble 'alien' structures, it's important we don't get too carried away with what grainy images can sometimes suggest.
You may remember the strange, cube-shaped object spotted on the Moon by China's Yutu 2 rover last year. After further investigation, it turns out that the 'alien hut' was simply another rock – with tricks of light and perspective giving it its cuboid shape.
Similarly, we suspect that this mystery doorway will ultimately have an explanation that's just as ordinary... but we're having plenty of fun speculating in the meantime.

» Doorway to underground base on Mars ??
» New Mars Discovery Of Sheet Metal With Perfect Circle In It
» Ancient Aliens On Mars: Discovery Of Large Driveway, March 22, 2014
»  (Soft Disclosure) Life existed on Mars, shocking discovery suggests
» Discovery of Pyramids and Other Ancient Ruins in the Region of Gale Crater MARS