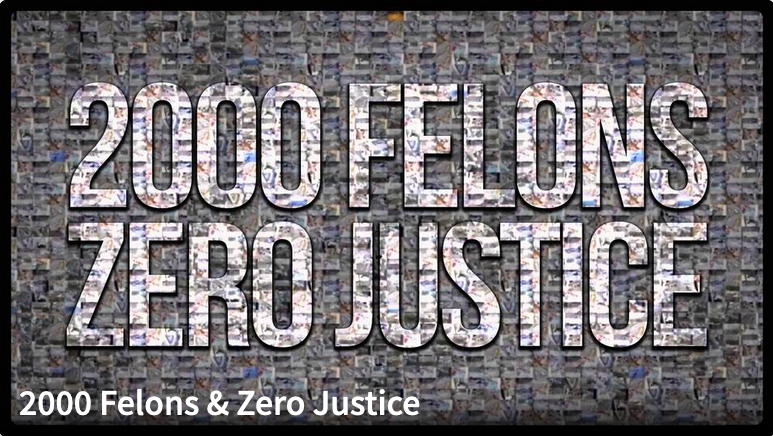 by Greg Reese
In Dinesh D’Souza’s ‘2000 Mules’, a team with over 40 years of experience investigating election security and election fraud provide crystal clear evidence that the 2020 Election was rigged.
They did so by focusing their investigation on only 2,000 individuals, a small percentage of the entire operation.

These 2,000 individuals were tracked via cellphone data and video surveillance cameras, which clearly shows them knowingly committing voter fraud over and over again, while photographing themselves doing it.
All acting as mules, delivering ballots from Democrat-aligned NGOs to official ballot boxes in the 2020 Election.
2,000 felons caught on tape.

This movie provides smoking gun proof that the 2020 Election was stolen and makes it absolutely apparent that the entire system is corrupt, because where is the justice?
If America had any actual law enforcement, they could simply arrest these 2,000 mules and start an official investigation, which would undoubtedly reveal what many of us already know: that the people currently destroying America from within were not elected by the American People.
But we don’t have law enforcement and we don’t have a news media.
On a personal note, I have to say that this movie was depressing – infuriatingly depressing.
Yes, it has smoking gun evidence that the election was stolen but it was also a stark reminder of how the American People have no voice.
We knew the election was stolen. That’s why millions of us marched on DC, in the biggest peaceful protest of our nation’s history.
It was obvious to us all.
But after a few dozen Feds fired off a couple of flash bombs and murdered an innocent woman in cold blood, the fake Republican grifters ran home with their limp tails between their legs, submissively agreeing to never speak of election fraud, ever again – even as hundreds of innocent Americans rot in jail. And even as the country is destroyed from within.
They have been silent – all for fear of losing their meaningless jobs of selling the American People the biggest lie of all: that their vote counts.
For those of us paying attention, it clearly doesn’t but that doesn’t stop these charlatans from telling you that all you need to do is get out and vote.
Democrats are in full support of destroying America and the Republicans are all cowards. It’s a show. Both sides are nothing but prostitutes to the big banks and their lobbyists, happy to see the country slip into the abyss, so long as they get their paycheck.
They’ll sell you the truth online for $20, and hope it satiates you. Because that’s all you get. There is no justice.
The American People are on their own – and the sooner we realize that, the better.
Because we the people have been praying for a miracle and that miracle is here: time. Miraculously, we still have time to act but that time is rapidly running out and voting is no longer a solution – not until we fix this broken election system.
There will never be anything resembling a fair and honest election ever again, in this country, if We, the People don’t come together and exact justice now.

» Under New Proposed Internet Laws, We Will All Be Felons
» JUSTICE 4 HUMANITY - ACIJ - Arbitration Court of International Justice
» Robert F. Kennedy, Jr. Demands the Office of the Inspector General and Congress Investigate Department of Justice for Fraud and Obstruction of Justice
» Obama knew it all/ Seth Rich-Assange proof-Felons Vote from Jail?
» 2000 Years Old Computer : The Antikythera Mechanism