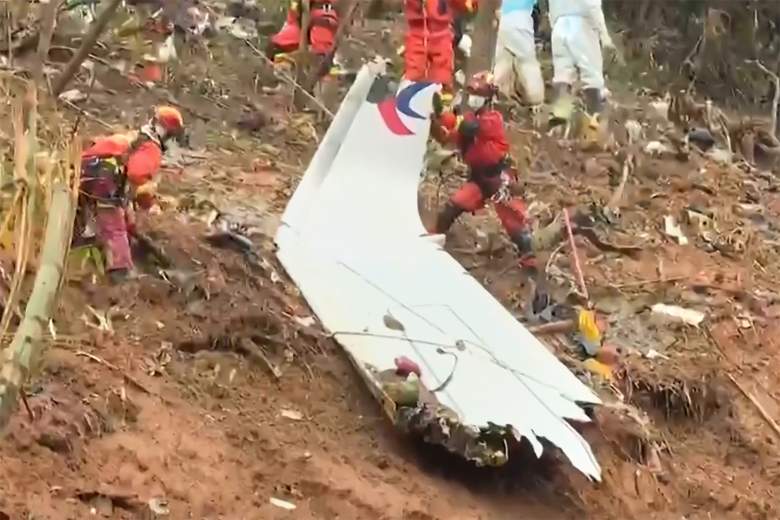 Getty  This screengrab taken on March 24, 2022 from video by state broadcaster China Central Television (CCTV) via AFPTV shows rescue teams with a piece of the fuselage as they continue their search at the site of where a China Eastern passenger jet crashed onto a mountainside near Wuzhou City in China's southern Guangxi region.
The black box recovered from a China Eastern Airlines Boeing 737-800 that killed 132 people suggests the plane may have been sent into an intentional nose dive, The Wall Street Journal reported. Viral video that captured the crash resurfaced as the news story developed May 17, 2022. Read on to watch the video in full.
The passenger plane was en route from Kunming to Guangzhou on March 21, 2022, when it steeply declined into a mountainous area of Guangxi, China. The plane plunged from 29,000 feet to 8,000 feet, leveled off, and then went into a freefall, earlier data revealed. The video showed the rapid descent of 26,000 feet per minute, which left a 66-foot deep hole in the ground.

Here’s what you need to know:

“Someone in the cockpit intentionally put the plane into a fatal nosedive.”
This makes the China Eastern crash in March perhaps the most troubling air crash since MH370. https://t.co/5OzXnXSq61
— Shiv Aroor (@ShivAroor) May 17, 2022

Several videos surfaced within a day of the deadly China Eastern Airlines crash and resurfaced as new information was revealed in the investigation. The video was captured by a local mining company on its surveillance footage, according to the Hindustan Times.

The plane was flying over Teng county near Wuzhou when it experienced a steep altitude drop from 29,100 feet to 9,075 feet in 2.15 minutes. The 17-second clip shows the plane disappear behind the tree line.
The video, which you can watch below, shows the near-vertical final descent of the plane. The cockpit voice recorder was recovered two days after the crash, and the flight data recorder was recovered March 27, 2022, according to ABC News.

The Civil Aviation Administration of China, the counterpart of The U.S. National Transportation Safety Board, will deliver future information, the NTSB told ABC News. U.S. regulators have not flagged Boeing for regulatory or mechanical issues, the NTSB told ABC.
“The NTSB will not be issuing any further updates on the CAAC’s investigation of the China Eastern 5735 crash,” the NTSB said in its statement to ABC. “When and whether CAAC issues updates is entirely up to them. And I haven’t heard anything about any plans for them to do so.” 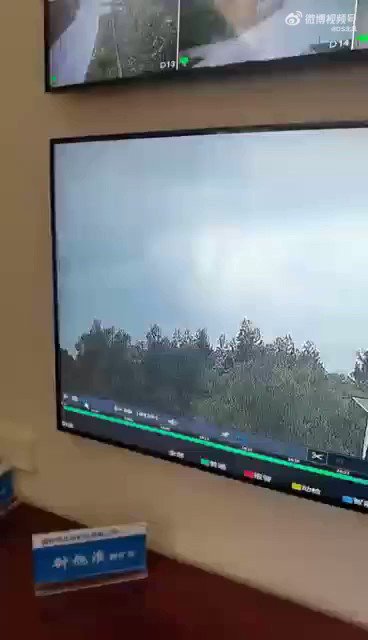 The Wall Street Journal, which broke the story on the new black box data from the China Eastern Airlines crash, said that a person in the cockpit input controls that put the plane into its steep and deadly rapid descent into the mountains. The Wall Street Journal reported that U.S. officials have centered their investigation around the pilot, but that it is possible someone else broke into the cockpit and gained control of the plane.
“The Boeing 737-800 was cruising at high altitude when it suddenly pitched into a near-vertical descent, plummeting into a mountain at extreme speed,” The Wall Street Journal reported.

An air crash happened just now in Wuzhou China, the number of casualties was not known yet. 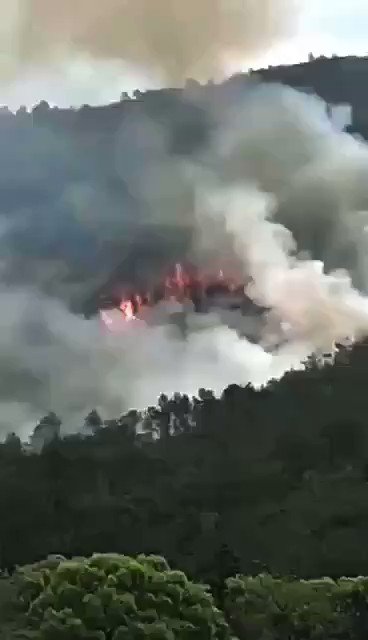 U.S. officials who spoke to ABC News said that the airplane’s flaps were not down and the landing gear was not engaged when it began to descend, which they believe indicates the crash was deliberate.
ABC News reported that investigators are also looking into the personal life of one of the pilots, and reported “he may have been struggling through certain issues right before the crash.” The ABC article did not elaborate on what those issues may have been.