In particle collider experiments, elementary particle interactions with large momentum transfer produce quarks and gluons (known as partons) whose evolution is governed by the strong force, as described by the theory of quantum chromodynamics. These partons subsequently emit further partons in a process that can be described as a parton shower, which culminates in the formation of detectable hadrons. Studying the pattern of the parton shower is one of the key experimental tools for testing quantum chromodynamics. This pattern is expected to depend on the mass of the initiating parton, through a phenomenon known as the dead-cone effect. Now, physicsts from the ALICE Collaboration at CERN’s Large Hadron Collider have made the first direct observation of this fundamental phenomenon. In addition to confirming this effect, the observation provides direct experimental access to the mass of a single charm quark before it is confined inside hadrons. 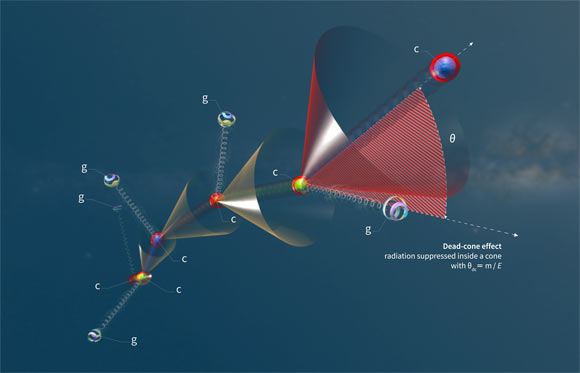 A charm quark (c) in a parton shower loses energy by emitting radiation in the form of gluons (g). The shower displays a dead cone of suppressed radiation around the quark for angles smaller than the ratio of the quark’s mass (m) and energy (E). The energy decreases at each stage of the shower. Image credit: Daniel Dominguez / CERN.
Quarks and gluons, collectively called partons, are produced in particle collisions such as those that take place at the Large Hadron Collider.
After their creation, partons undergo a cascade of events called a parton shower, whereby they lose energy by emitting radiation in the form of gluons, which also emit gluons.
The radiation pattern of this shower depends on the mass of the gluon-emitting parton and displays a region around the direction of flight of the parton where gluon emission is suppressed — the dead cone.
Predicted 30 years ago from the first principles of the theory of the strong force, the dead cone has been indirectly observed at particle colliders.
However, it has remained challenging to observe it directly from the parton shower’s radiation pattern.
The main reasons for this are that the dead cone can be filled with the particles into which the emitting parton transforms, and that it is difficult to determine the changing direction of the parton throughout the shower process.
Physicsts from the ALICE Collaboration overcame these challenges by applying state-of-the-art analysis techniques to a large sample of proton-proton collisions at the Large Hadron Collider.
These techniques can roll the parton shower back in time from its end-products — the signals left in the ALICE detector by a spray of particles known as a jet.
By looking for jets that included a particle containing a charm quark, the researchers were able to identify a jet created by this type of quark and trace back the quark’s entire history of gluon emissions.
A comparison between the gluon-emission pattern of the charm quark with that of gluons and practically massless quarks then revealed a dead cone in the charm quark’s pattern.
The result also directly exposes the mass of the charm quark, as theory predicts that massless particles do not have corresponding dead cones.
“The dead cone is a fundamental phenomenon in quantum chromodynamics, dictated by the non-zero quark masses, whose direct experimental observation has previously remained elusive,” the reserchers said.
“This measurement provides insight into the influence of mass effects on jet properties and provides constraints for Monte Carlo models.”
“These results pave the way for a study of the mass dependence of the dead-cone effect, by measuring the dead cone of beauty jets tagged with a reconstructed beauty hadron.”
“A future study of the dead-cone effect in heavy-ion collisions, in which partons interact strongly with the hot quantum chromodynamics medium that is formed and undergo energy loss through medium-induced radiation, is also envisaged,” they added.
“If a dead cone were observed for these medium-induced emissions, it would be a confirmation of the theoretical understanding of in-medium quantum chromodynamics radiation, which is a primary tool used to characterize the high-temperature phase of quantum chromodynamics matter.”
“The quark masses are fundamental constants of the Standard Model of particle physics and needed for all numerical calculations within its framework,” they said.
“Because of confinement, their values are commonly inferred through their influence on hadronic observables. An exception is the top quark, which decays before it can hadronize, as its mass can be constrained experimentally from the direct reconstruction of the decay final states.”
“By accessing the kinematics of the showering charm quark, before hadronization, and directly uncovering the dead-cone effect, our measurement provides direct sensitivity to the mass of quasi-free charm quarks, before they bind into hadrons.”
“Furthermore, future high-precision measurements using this technique on charm and beauty tagged jets, potentially in conjunction with machine-learning tools to separate quark and gluon emissions, could experimentally constrain the magnitude of the quark masses.”
The results were published in the May 19, 2022 issue of the journal Nature.
_____
ALICE Collaboration. 2022. Direct observation of the dead-cone effect in quantum chromodynamics. Nature 605, 440-446; doi: 10.1038/s41586-022-04572-w