OUT OF MIND » TRUTH IN CONSPIRACY THEORIES? » CONSPIRACY & FALSE FLAG EVENTS: PAST & PRESENT » Texas Gunman Was In The Classroom For Half An Hour Before Law Enforcement Stormed In. Why?

Texas Gunman Was In The Classroom For Half An Hour Before Law Enforcement Stormed In. Why?

Texas Gunman Was In The Classroom For Half An Hour Before Law Enforcement Stormed In. Why? Thu May 26, 2022 9:25 am

Texas Gunman Was In The Classroom For Half An Hour Before Law Enforcement Stormed In. Why?
Date: May 26, 2022Author: Nwo Report

The gunman in the Uvalde, Texas, school shooting was reportedly left in the classroom full of children for over “30 minutes,” raising questions about the timeline of the shooting, according to multiple reports.
There are inconsistencies between different accounts of the timelines of the day, including whether shots were fired when an officer attempted to stop the gunman from entering the school, and questions remain about why law enforcement did not engage him sooner, according to various media reports. One witness told the Associated Press that onlookers had urged police officers to charge the school during the shooting, but to no avail. (RELATED: Dems Outraged About Texas Shooting Pushed Bill To Defund School Police Protection)
Salvador Ramos, the 18-year-old gunman, reportedly entered the building’s back entrance without being engaged by the police officer on the scene, Republican Texas Rep. Tony Gonzalez said on “The Lead” with Jake Tapper Wednesday. The officer on the scene reportedly cornered the gunman in one classroom, where a brief firefight ensued through the room’s door.

1/ Clearest timeline of the shooting yet from @jaketapper interview with Congressman Gonzalez: Ramos is not engaged by school officer until AFTER he enters school via back entrance and classroom where he's murdering kids. 1 officer wounded during this initial contact 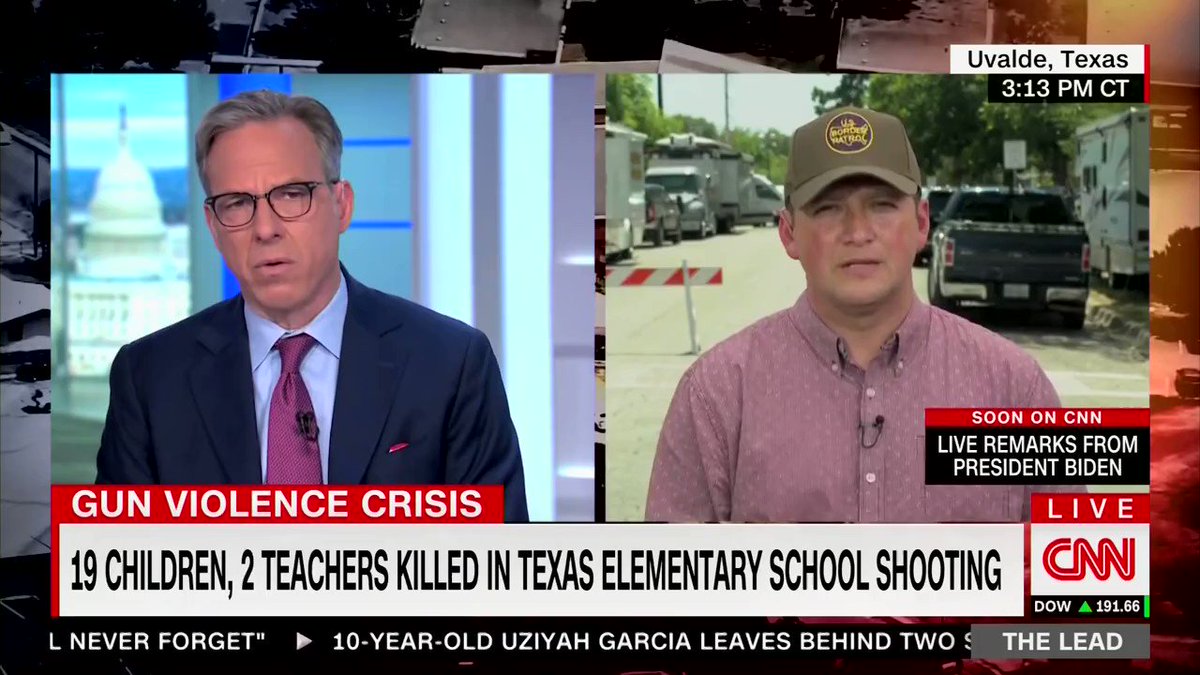 A law enforcement official familiar with the matter, but who isn’t authorized to comment on the investigation, told the AP that police had difficulties breaching the classroom door to neutralize the gunman and had to ask school staff to open it with a key.
Law enforcement offered contradictory statements about the length of the massacre, the AP reported.
The New York Times reported that there were conflicting accounts of whether fire was exchanged when law enforcement initially engaged the shooter, who had drawn their attention by crashing a truck into a ditch at high speeds at around 11:30 a.m.

CNN reporter Ed Lavandera offered a similar account, and said the gunman was in the classroom where most of the murders occurred for 40 to 60 minutes before a border patrol agent entered the classroom and fatally shot him, according to investigators. Lavandera added that a “school campus officer” had engaged Ramos “just outside” the building, but no shots were “fired at that moment.”
One man suggested onlookers storm the school themselves, and another witness said law enforcement was unprepared, the AP reported. Another man whose daughter was killed said he heard about the shooting and arrived while it was ongoing, and police were still waiting outside the building.
Texas Department of Public Safety spokesperson Travis Considine told the AP that the gunman did exchange fire with law enforcement both inside and outside the building, in contrast to other sources, and that all of the officers were injured. He said authorities were unsure whether fire had been exchanged in the initial engagement.
The Uvalde Police Department and the local Border Patrol office did not respond to The Daily Caller News Foundation’s requests for comment.

Another bullshit false flag event fomented by the twisted fucks attempting to take this country down by removing all guns- a fantasy of the deep state Marxists running their plan on us. Are we not awake yet? They're killing our innocents to foist their plans on us.-Think Fla. High school shooting- Wait, don't go inside, yet... Pure, disgusting evil. Period. Connect the dots fools!!

OUT OF MIND » TRUTH IN CONSPIRACY THEORIES? » CONSPIRACY & FALSE FLAG EVENTS: PAST & PRESENT » Texas Gunman Was In The Classroom For Half An Hour Before Law Enforcement Stormed In. Why?

» TEXAS RAMPAGE - GUNMAN FIRES FROM MAIL TRUCK
» Half of a years rainfall in one day shatters Texas record
» Skeletal remains of half cat / half human now on display in Cairo museum
» Half-man, half-mantis petroglyph discovered
» Paul’s Revolutionaries Stormed The CCRP Citadel – And Won