OUT OF MIND » THE INSANITY OF REALITY » GOVERNMENTS & THE NEW WORLD ORDER » WE WON!??? 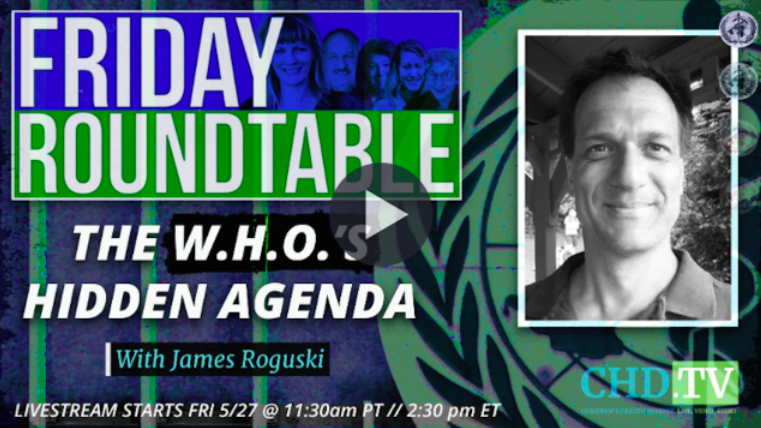 George Webb is currently on the ground, in Geneva, Switzerland and he corroborates the reports of James Roguski, that the WHO’s attempt to usurp the national sovereignty of all UN members at the World Health Assembly over this past weekend has failed.
This was largely due to Roguski’s incredible work in raising awareness about the treasonous amendments proposed by the Biden Regime and the rejection of same by a coalition of African nations, Brazil, Russia, Iran and others.
Both George and James agree that we can celebrate our victory in this battle but both warn that the war is hardly over, with George tweeting, “We won this round. But you know more WHO subterfuge awaits.”

George says that WHO Director Tedros Adhanom is a puppet and that, “Until you know that all the bids go to the WHO Secretariat and they also get back-doored over to the Wellcome Trust – and that’s who’s really running the show, you can’t unwind it.”
In this Substack article, George suggests that Virginia Benassi, or rather “her” email address is a front for two NATO spy chief cousins, Pietro and Giuseppe Benassi, created as a dropbox to receive all of the vaccine bids, so that the two cousins can “compare the best of all the bids into a composite proposal of their own for the COVAX bid to the WHO for 1.2 Billion vaccinations…It is just a license to print vaccine money!”
More recently, he has said, “We have traced Virginia Benassi as the key recipient of a variety of pandemic bids at the WHO Secretariat in Geneva including Zika, Ebola, a new, novel virus in China in 2009, and a host of other hemorrhagic fever viruses.”

He says that the WHO Secretariat is implementing NATO’s blueprint. “They do the SAGE Group (Scientific Advisory Group for Emergencies), alright? Virginia Benassi’s a member of both groups…Virginia Benassi is also the recipient of the Wellcome Trust bids, here.
“So, benassiv@WHO.int leads directly to the Secretariat. That’s how you break the WHO. It’s also how you break the Wellcome Trust’s stranglehold…
“In order to beat these guys…we need to focus in on the power structure, the Dark Hand. It’s sort of like going after Hitler with the Valkyrie Operation, rather than attacking the whole German Army, right?
“We know who’s at the center of this thing. It’s the NATO Secretariat. It isn’t just Virginia Benassi, as a front person, it’s the whole little NATO cabal, UN cabal running this thing, Stoltenberg, etc. That’s the Dark Hand. We’ve got to get smart about this.”
In my opinion, the nations of the world must cut all ties with the United Nations and ultimately, the UN and all of its related bodies must be permanently disbanded, including the WHO, the World Bank, the IMF and the World Economic Forum, which has been controlling the UN since 2019.
As George says, it’s as simple as getting involved, doing research and getting the word out and that our failure to do so would lead to our demise.
***
by James Roguski
The Biden Administration suffered an absolutely STUNNING DEFEAT in their attempt to amend the International Health Regulations against the will of “We the People”.
You will NOT hear about this on mainstream media.
Here is a brief summary of what happened on Friday May 27, 2022 at the 75th World Health Assembly
Spectacular news out of Geneva points to a complete and total victory for those who opposed the amendments to the International Health Regulations proposed by the Biden administration
Official delegates from wealthy developed nations like Australia, the UK, the European Union and the United States spoke in strong support of the amendments and urged other states to join them in signing away their countries’ sovereignty.
The first sign, however, that things might not be going the globalists’ way, came when Botswana stated that they would be collectively withholding their support for the ‘reforms’, which many African members were very concerned about.
Multiple other countries also said they had reservations over the changes and would not be supporting them either. These included Brazil, Brunei, Namibia, Bangladesh, Russia, India, China, South Africa, and Iran. Brazil in particular said it would exit WHO altogether, rather than allow its population to be made subject to the new amendments.
In the end, the WHO and its wealthy nation supporters were forced to back down.
On January 18, 2022, the Biden administration proposed amendments to the International Health Regulations. They did their best to keep them hidden.
On March 31, 2022 I published THIS ARTICLE to shine a bright light on this issue. For the next two months thousands of people helped to spread the word all around the world.

The events that occurred in “COMMITTEE A” during the 75th World Health Assembly were filled with intrigue and conflict that was masked by diplomatic politeness.

Please watch the video clips below to see the highlights.

PRESIDENT OF COMMITTEE A TALKING ABOUT TRANSPARENT EMAIL: 2:33:58 – 2:35:14
Delegates from a number of African nations spoke out against this blatant attempt at a power grab.

A well placed source shared: “The resolution on IHR amendments was not passed at the World Health Assembly, as African countries were concerned that there was inadequate consultation amongst member states, and the process was being rushed. Botswana read the statement on behalf of the 47 AFRO members and I was personally present.”
“The African region shares the view that the process should not be fast tracked…,” Moses Keetile, deputy permanent secretary in Botswana’s health ministry, told the assembly on Tuesday on behalf of the Africa region.
“We find that they are going too quickly and these sorts of reforms can’t be rushed through,” said a concerned African delegate in Geneva.

Shabnam Palesa Mohamed reported that, “In a rare show of African power and solidarity, several African member states objected to proposed International Health Regulations amendments, discussed at the World Health Assembly 75 this week – a move many believe might shake up the World Health Organization’s dominance. The reason I state that the amendments were illegitimate is that they were first submitted on May 24, 2022 in clear violation of Article 55 of the International Health Regulations that clearly state the following:

…the text of any proposed amendment shall be communicated to all States Parties by the Director-General at least four months before the Health Assembly at which it is proposed for consideration.


CLICK HERE TO WATCH THE RECORDINGS OF THE ALL OF THE SESSIONS OF THE 75TH WORLD HEALTH ASSEMBLY.

Take the time to celebrate our victory and enjoy yourselves this Memorial Day weekend, but then get back to work.

OUT OF MIND » THE INSANITY OF REALITY » GOVERNMENTS & THE NEW WORLD ORDER » WE WON!???