OUT OF MIND » BREAKING NEWS & HOT TOPICS » THE GREAT DIE OFF » Dr David Martin: ‘You Are Now on Notice of Felony Violations’

Dr David Martin: ‘You Are Now on Notice of Felony Violations’ 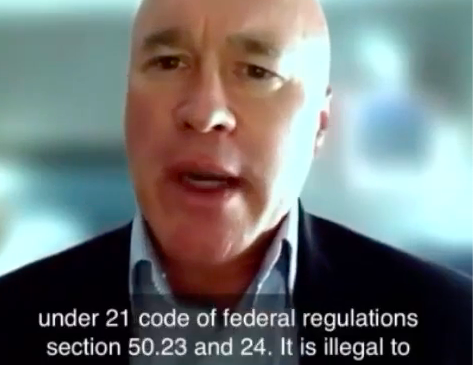 Dr David Martin tells Patrick Gentempo that under 21 Code of Federal Regulations § 50.23 and 24 – Exception from General Requirements, it is illegal to make anybody participate in an experimental program using coercion.
“That is, in fact how…we actually embraced, in US Law the Nuremberg Code. So coercion is illegal and we need to call it coercion. We don’t want to call it ‘leverage’, we don’t want to call it ‘pressure’. We want to call it the illegal act that it is. It’s coercion.
“And that becomes important, because under 18 US Code § 2331 §§ 802, inside of the definition of domestic terrorism is any time a US citizen or a government in the US is forced to do something that it would not otherwise do, that’s not only coercion but domestic terrorism.

“Now, this conversation and every other conversation I encourage people to, in fact take those two laws and when they are met with somebody telling them they’re supposed to get the shot, actually ask the person – and record this, use your phone, use a recording device – and ask if they are, in fact violating 21 Code of Federal Regulations § 50.23 and 24? ‘Are you interested in doing a civil violation of the law?’
“And if they say yes, they’re cool with that, then say, ‘Are you willing to violate 18 US Code § 2331, which says that it is illegal to coerce the population and that is a felony and the felony has a 99-year prison term.
“And so, here’s the problem. We need to arm ourselves as a big community to only do what we’ve done – and by the way, kudos to everyone who has done the resistance up until now – but now, we’ve got to arm ourselves with the very weapons they’re using and throw them back.

“I always say the metaphor for me is if somebody throws a hand grenade at you, pick it up, pull the pin out and throw it back. Give me a hand grenade. Use it.
“What we need to be doing is we need to be informing ourselves and most recently, Patrick – and this will be a punchline I get to in the end – but I just put all of the felony statutes and all of the felony evidence into a single document that everybody can use, everybody can reference and just go to your employer to your local grocery store, to your local theater, to your local school board, whatever it is.
“Just say, ‘Hey, which one of these felonies do you want to be implicated in? Because all of them carry 99-year prison terms and up to $100 million fine.’
“So, that’s a $100 million fine for an institution. So, it’s actually a big deterrent. And as we have been manipulated and coerced, as a population, we now need to actually take the offensive position and say, stand up, be informed and provide the eight felony counts that you can ask any employer, any business, anybody who’s trying to push the mandate: ‘Which one of these felonies do you now want to be liable for?’
“And guess what? Like you just said, the courts, are, in fact going to ultimately deal with this issue and if you have gathered evidence in your own coercion in your own manipulation of the thins that have been foisted upon you, you will actually be part of the class that one day recovers those damages.
“So I say, stand firm, inform yourself, get evidence and take action.”
To download the PDF of Dr Martin’s proposed indictment, listing the 8 felonies, go to: https://www.davidmartin.world/wp-content/uploads/2021/12/The-Criminal-Conspiracy-of-Coronavirus.pdf
Print them out and send them to your states’ US Attorneys, Attorneys General, elected officials, school boards; to anybody who’s doing a mandate and say, ‘You are now on notice of felony violations.’
• Count 1: 18 US Code § 2331 §§ 802 – Acts of Domestic Terrorism Resulting in Death of American Citizens
• Count 2: 18 US Code § 2339 – Conspiring to Commit Acts of Terrorism
• Count 3: 15 US Code §1-3 – Conspiring to Criminal Commercial Activity
• Count 4: 18 US Code § 175 – Funding and Creating a Biological Weapon
• Count 5: 15 US Code §8 – Market Manipulation and Allocation
• Count 6: 18 US Code § 1001 – Lying to Congress
• Count 7: 15 US Code § 19 – Interlocking Directorates
• Count 8: 18 US Code § 2384 – Seditious Conspiracy

OUT OF MIND » BREAKING NEWS & HOT TOPICS » THE GREAT DIE OFF » Dr David Martin: ‘You Are Now on Notice of Felony Violations’