OUT OF MIND » THE INSANITY OF REALITY » ILLUMINATI AGENDA & WORLD DOMINATION » OILIGARCHY: The Curious Death Of Rudolf Diesel

The History and Mysterious Death of Rudolf Diesel

Diesel was born in Paris in 1858 to Bavarian immigrants but when he was 12 years old his parents were forced to flee France because of the Franco-Prussian war. They settled in London but soon after Diesel was dispatched to live with his uncle and aunt in Augsburg, a relatively small Bavarian city, best known for being the birthplace of Mozart’s parents.
The purpose of this was so that Diesel could become fluent in German whilst being educated at Königliche Kreis-Gewerbeschule (Royal Circle Vocational College), where his uncle taught math.

Rudolf Diesel
Excelling, he won a scholarship to study at the Royal Bavarian Polytechnic of Munich. His father insisted that he give up on his studies and get a job however, Diesel defied him, and despite getting and overcoming Typhoid, finished with top honors. After graduation, he returned to Paris to work with Professor Carl von Linde, who’d taught him in Munich.
Linde saw Diesel’s potential and soon promoted him to the manager of the research and development department which concentrated on refrigeration technology. But Diesel’s ambitions were beyond keeping things cold and he branched out and started to explore the building of an engine, using ammonia vapor, however, the engine he built exploded, nearly killing him and forcing him to spend months in hospital. For the rest of his life Diesel was nearly blind. Diesel recovered and continued, undeterred, to achieve his dream of creating a more efficient engine. Around this time Karl Benz had just been granted a patent for a new invention he had designed and named the ‘Motor Car’.

Meanwhile, Diesel, who had acquired an in-depth knowledge of thermodynamics, was looking at ways to maximize fuel efficiency, having realized that up to 90% of the energy that fuel produces is wasted. Diesel teamed up with Maschinenfabrik Augsburg (Now known as MAN Diesel) and Friedrich Krupp AG to fund his projects. After more than 7 years of tinkering with various engine designs the ground work was first achieved in 1892 with his first successful patent for an engine that ran on powdered coal. After much work, he patented what he had called the compression-ignition engine then returned to Augsburg where he spent 4 years developing a series of increasingly successful models, culminating in his demonstration in 1897 of a 25-horsepower, four-stroke, single vertical cylinder compression engine.

The engine design utilizes the basic principals of the Carnot Cycle of thermodynamics which is a principal theory explaining the upper limit of efficiency of heat converted into work, with the help of refrigeration. The design Diesel invented uses compression ignition rather using a spark plug like a gas engine and can be run on bio-diesel or petroleum based fuels. A compression design is roughly 30% more efficient than a traditional gas burning engine. It is the forced compressed air which is mixed in the combustion chamber which leads to higher internal temperatures. The gasses will expand at a higher rate applying more pressure on the pistons thus turning the crankshaft at a faster rate. The engine instantly became a huge hit with the general public when it was first introduced at the 1898 Munich Exhibition.
Throughout the process, Diesel believed that his invention would be a great help to small businesses. For craftsmen and artisans who, through using the diesel engine, could start to compete with larger, more powerful companies. In fact, the opposite occurred and it was the industrialists that embraced it – using his engine to power pipelines, water plants, trucks and boats, and later, which some believe led to his death, U-Boats. 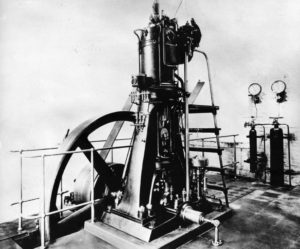 First Diesel Engine Designed by Rudolf Diesel
Diesel’s engine and the patents that went with it made him very wealthy, very quickly, earning him millions.  He had married, bore three children, was famous and respected.  Diesel was ahead of his time warning the pubic of potential air pollution and believing businesses should be owned by their employees – some would say – he had it all.
On a September morning in 1913 Diesel climbed aboard the Post Office steamer bound for London. War was looming and the German Navy had already made an approach to have exclusive rights to the Diesel Engine to power its submarines. Diesel had refused and was traveling to London for a series of meetings. One of which was with the British Navy. On the evening of the 29th September, he dined on the ship and at around 10 pm retired to his cabin, requesting a wake-up call at 6:15 am. When that call came there was no reply so a member of the crew took the liberty of entering his cabin. Diesel’s nightshirt was laid out neatly on the bed, his watch had been removed from his wrist and carefully placed. His hat and coat hung neatly. Yet Diesel was nowhere to be seen.

The diesel engine was created to burn hemp seed oil

Ten days later a Dutch ship came across a corpse floating in the ocean. It was in such a state of decomposition that the body, once retrieved, was returned to the sea. Though a crewman went through the pockets and found an ID card, along with a glasses case and a pocket knife. These items were later identified by Diesel’s son, Eugen, as his father’s.
Before he left on his journey Diesel had left his wife a bag, with instructions to not open it for one week. When she did she found the equivalent of what would be worth $1.2 million today, along with financial documentation that suggested that Diesel was close to bankruptcy – quite incredible considering the wealth that he had accumulated. Also, on the ship Diesel had left his diary. On the date of his disappearance was a page marked with an X, which some believe to be a sign for death.
Two biographies of Rudolf Diesel conclude that his death was a result of suicide. However, other researchers believe that he was murdered, potentially on the orders of the German Imperial government due to his refusal to grant the German armed forces exclusive use of his engines. He was also rumoured to be planning to meet Royal Navy personnel to discuss the potential for fitting diesel engines on British submarines.
To this day no one knows what truly happened. Was he murdered by the Germans, by a competitor, or did he, in the knowledge of his financial state, take his own life. We will never know. What we do know is that he was responsible for inventing an engine that will go down in history of one of the greatest engines ever made. One that he professed could run on vegetable oil – which was not taken seriously until over one hundred years later.
https://www.capitalremanexchange.com/history-death-rudolf-diesel/

OUT OF MIND » THE INSANITY OF REALITY » ILLUMINATI AGENDA & WORLD DOMINATION » OILIGARCHY: The Curious Death Of Rudolf Diesel