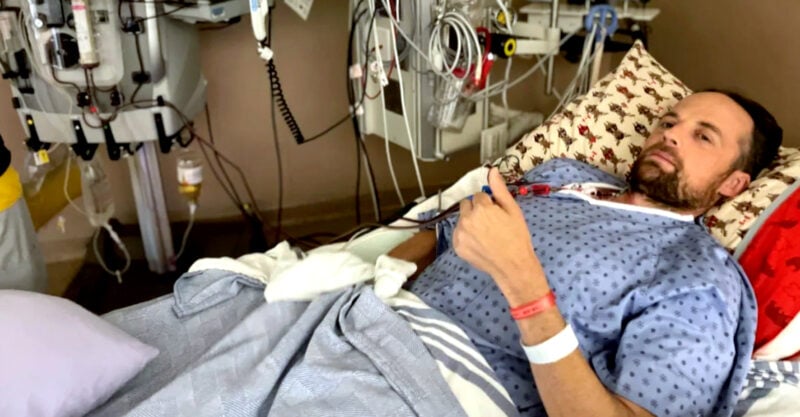 Ross Wightman, a Canadian man who developed Guillain-Barré Syndrome after receiving the AstraZeneca vaccine last year, may seek additional compensation, stating he doesn’t think the approved payout matches the physical, emotional and financial toll he’s endured.
A 40-year-old man living in British Columbia, Canada last month [url=https://www.cbc.ca/news/canada/british-columbia/bc-man-vaccine-injury-payout-1.6472636#:~:text=The letter Wightman received makes,the program is about %24284%2C000]learned[/url] the Canadian government approved his request for compensation for a COVID-19 vaccine injury.
Ross Wightman, a 40-year-old husband and father of two, said it took years of submitting paperwork before the government approved the claim.
He is believed to be among the first of only a handful of people to receive compensation under Canada’s Vaccine Injury Support Program (VISP).
Wightman did not divulge the exact amount of the payout. However, he said he did not qualify for the program’s maximum payout of $284,000.
While there have been 46,149 officially recorded adverse reactions to COVID-19 vaccines in Canada, only a handful of those injured have received any compensation.
Wightman was diagnosed with Guillain-Barré syndrome (GBS), a rare condition affecting the nervous system that left him partially paralyzed, soon after receiving his first and only dose of the AstraZeneca COVID-19 vaccine in April 2021, [url=https://www.cbc.ca/news/canada/british-columbia/bc-man-vaccine-injury-payout-1.6472636#:~:text=The letter Wightman received makes,the program is about %24284%2C000]CBC reported[/url].
Wightman told the National Post he developed severe back pain 10 days after getting the shot. He went to the emergency room numerous times and was admitted on a Saturday when he reported facial tingling.
“By Tuesday, I had full facial paralysis,” Wightman said. “I could blink but I couldn’t smile or show my teeth at all, and had paralysis from the waist down as well.”
He spent 67 days in the hospital before being able to return home. Wightman, who worked as a pilot and real estate agent prior to his diagnosis, said has been unable to return to work.
The hardest thing, though, he told CBC, is being unable to do physical activities — like playing soccer — with his kids.
On May 20, Wightman received a letter acknowledging there was a “probable cause association” between the disorder and his vaccination and stating he would be issued a compensation payout.
The Canadian government, which established the VISP in July 2021, was the only G7 country that did not have a vaccine injury compensation program prior to the onset of the COVID-19 pandemic.
Getting payout took persistence, many others still left uncompensated
According to VISP’s website, 400 vaccine injury claims were submitted in 2021, between June 1 and Nov. 30 — and only five were approved by a medical review board.
Only a trickle of Canadians who submitted vaccine injury claims to VISP have received payment.
“It’s indicative of our persistence with the program,” Wightman told Global News yesterday.
He added:
“Every week or every two weeks, phoning, emailing, ‘What’s happening?’ ‘Do you have all the paperwork you need?’ ‘Has this doctor sent you this file?’”
While receiving the program’s payout letter was “[url=https://www.cbc.ca/news/canada/british-columbia/bc-man-vaccine-injury-payout-1.6472636#:~:text=The letter Wightman received makes,the program is about %24284%2C000]quite vindicating[/url],” Wightman is not “overly excited” about the payout, which includes eligibility for a maximum income replacement of $90,000.
“The income replacement won’t be what we’ve been used to … so that’s a little disappointing to me,” he said.
Wightman said he plans to appeal the payout amount to the program’s medical review board, which he said failed to take all his symptoms into account.
In addition to paralysis and limited use of his hands, Wightman also experiences loss of feeling in his feet and vision impairments. These other symptoms weren’t included in his injury benefit assessment, he told CBC.
Wightman is also seeking legal counsel.
The BC Centre for Disease Control (BCCDC) so far recorded 10 reports since December 2020 of individuals hospitalized with GBS within 30 days of a COVID-19 vaccine.
Four cases of GBS followed the AstraZeneca vaccine, five followed Pfizer-BioNTech Comirnaty, and one followed Moderna Spikevax.
In the U.S., the number of reports of GBS following COVID-19 vaccination is higher.
As reported by The Defender, Vaccine Adverse Events Reporting System (VAERS) data released June 3 by the Centers for Disease Control and Prevention showed 883 reports of Guillain-Barré syndrome, with 42% of cases attributed to Pfizer, 30% to Moderna and 28% to Johnson & Johnson between Dec. 14, 2020, and May 27, 2022.
The Defender last year reported on a Texas teenager diagnosed with GBS a few weeks after his first dose of a COVID-19 vaccine. His family did not divulge which vaccine the teen received.
GBS isn’t the only injury people are reporting after receiving COVID-19 vaccines in Canada or the U.S.
The most recent U.S. VAERS data include 1,287,595 reports of adverse events from all age groups following COVID-19 vaccines, including 28,532 deaths and 235,041 serious injuries between Dec. 14, 2020, and May 27, 2022.
Although reports submitted to VAERS require further investigation before a causal relationship can be confirmed, the system has been shown to report only 1% of actual vaccine adverse events, as previously reported by The Defender.
Federal programs in the U.S. compensating people who suffered injuries from vaccines or COVID-19 pandemic treatment are facing so many claims that thousands of Americans may not receive payment for their injuries for a long time, Politico reported earlier this month.
Pressure mounts in Canada to drop vaccine mandates
While the risk of a GBS diagnosis following a COVID-19 vaccination – in this case, using the AstraZeneca vaccine – is very rare, the BCCDC and Health Canada have documented the probable causal link.
Health officials’ acknowledgment of the potential health risk has sparked new criticism of COVID-19 mandates.
On Tuesday’s episode of “The Jimmy Dore Show,” the comedian and political commentator discussed Wightman’s payout and the BCCDC’s knowledge that GBS is a documented possible side effect of COVID-19 vaccination.
“So they know [that a diagnosis of GBS is possible],” Dore said. “Doesn’t that change every calculation you’ve ever had for mandating someone take this treatment?”
“It sure does for me,” he said.