OUT OF MIND » BREAKING NEWS & HOT TOPICS » THE GREAT RESET » When Did New York Times Become a Propaganda Tool for WEF’s Great Reset?

When Did New York Times Become a Propaganda Tool for WEF’s Great Reset?

The New York Times — once the gold standard for America’s free press — has devolved into a propaganda tool for the World Economic Forum’s Great Reset narrative. 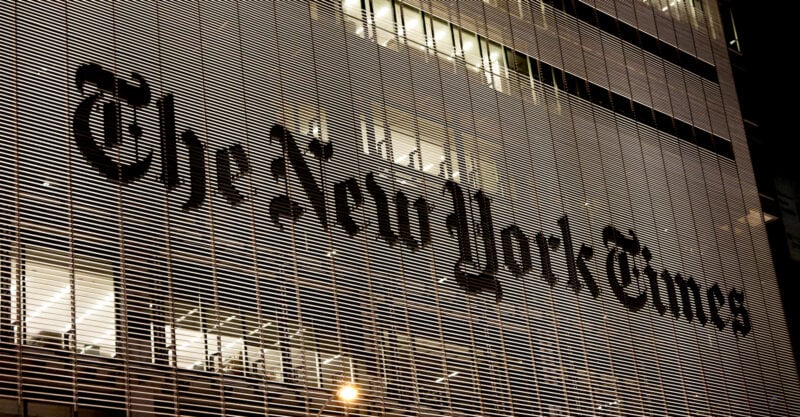 Miss a day, miss a lot. Subscribe to The Defender's Top News of the Day. It's free.
Story at a glance:

The New York Times (NYT) was once upon a time the gold standard of the American free press, lovingly known as the “Gray Lady” — a nod to its fearlessly honest and impartial reporting of “all the news that’s fit to print.”
Those days are long gone, however.
As noted by Ashley Rindsberg in his book, “The Gray Lady Winked: How the New York Times’ Misreporting, Distortions & Fabrications Radically Altered History,” its founding vision and principles have radically devolved over the generations, and “the costs of the Times’ habitual and intentional misreporting over the past century are incalculably high.”
To highlight just one example of the NYT’s inglorious fake news past, the paper continued to broadcast Nazi propaganda in support of Hitler throughout World War II:
“… in 1939, Hitler’s Gestapo cronies and propagandists coordinated Operation Himmler, which involved Polish-speaking Germans storming a Gleiwitz radio station with guns and shouting in Polish. It was enough to dupe the German people and the world into believing that Poland had attacked Germany, creating the pretext to ‘retaliate.’
“None of it was true, but the New York Times took the propaganda hook, line and sinker: from Hitler’s mouth to the Times front page. This story is more nefarious than a simple case of repeatedly promulgating Nazi propaganda around the world without adding any countervailing voices. The ‘semi-official news agency’ that the New York Times article mentions was one of the main cogs in the Nazi propaganda machine.
“The head of National Socialist propaganda Joseph Goebbels and his cronies had a hand in every press publication since 1933, so by 1939 there was no ‘semi-official news agency’ — only official Nazi-approved organs. And the NYT would have known that … For a decade the Times cast Hitler’s Nazi Germany in the best possible light, even in the face of riots, violence and takeovers.”


Propaganda of the most damaging sort
Over the past two years, in particular, the NYT has revealed itself as a pure propaganda outlet. It doesn’t even try to hide its bias.
It’s on the side of the technocratic One World Order cabal and will go to absurd lengths to promote and defend the World Economic Forum’s (WEF) Great Reset narrative, just as it defended Hitler’s regime during World War II.
What ideology underpins the editorial decisions of the NYT today? I can’t see inside the controlling shareholders’ brains, but from the outside, judging purely by what they see fit to print, it seems they’re working hand in hand with the global enemy of all mankind.
As recently as 2019, the NYT devoted an entire issue to prop up the fabricated “1619 Project,” which seeks to reframe America’s origin as a nation of freedom to one of still-ongoing tyranny to be toppled.
That the NYT is working on behalf of the globalist cabal is also evident by the fact that NYT managing editor Rebecca Blumenstein was among the journalists invited to the WEF’s 2022 meeting in Davos.
She’s an insider. She’s part of the club that wants to erase national sovereignty in favor of an unelected global governing body based on technocratic ideology, social engineering and anti-God, anti-humane transhumanist ideals.
NYT hit parade
In July 2021, the NYT published an article declaring me “The Most Influential Spreader of Coronavirus Misinformation Online.” The NYT described me as “a pioneer of the anti-vaccine movement” who “creates and profits from misleading claims about COVID-19 vaccines.”
That article contained such blatant lies, I ended up sending the author, Sheera Frenkel, a legal notice demanding a retraction.
For example, she claimed the Food and Drug Administration has levied multimillion-dollar fines against me — a complete fabrication, as the FDA has never fined me a dime.
Frenkel also implied that I misrepresent myself as a published author of a paper on vitamin D for COVID-19 by stating she was “unable to verify” that I had in fact published such a paper.
This is despite the fact that I had sent her a direct link to it, and the fact that it’s easily found by searching for my name in the PubMed database. A child capable of spelling my name could find it.
So, the NYT doesn’t just violate journalistic standards by ignoring the opposing side of a given argument. It outright lies about it, squarely pigeon-holing the paper as a propaganda rag.
Most recently, a May 25, NYT article again paints me as a top “disinformation dozen” figure — a term taken straight from the Center for Countering Digital Hate’s (CCDH) “Disinformation Dozen” report, which claimed a mere 12 individuals were responsible for 65% of anti-vaccine content on Facebook and Twitter.
The CCDH insisted that were these 12 individuals de-platformed, most online disinformation would be eradicated. However, this claim turned out to be so grossly inaccurate, that Facebook itself even publicly rebuked it.
After conducting its own investigation, Facebook concluded these 12 individuals — myself included — accounted for a minuscule 0.05% of vaccine-related content views.
Yet, with a reach of influence amounting to a tiny fraction of a percent, the NYT still insists on labeling us as “the disinformation dozen.” It’s a hallmark propaganda move.
The CCDH — the propagandist’s favorite resource
And speaking of propaganda, that is the sole function of the CCDH as well — a one-man organization with undisclosed funding. Its connections, however, firmly link it to technocrat-led institutions that support the WEF’s Great Reset, so its raison d’être — or reason for being — is not difficult to identify.
By way of its board members, the CCDH can be linked to the Trilateral Commission, the Atlantic Council and the European Council of Foreign Relations, which are all Great Reset supporting institutions.
Board members are also linked to the Save the Children Fund — funded by the Gates Foundation and a partner of Gates’ GAVI Vaccine Alliance — the British Parliament, CIA and Reuters, an exclusive WEF content distributor.
CCDH chairman Simon Clark is a senior fellow with the Center for American Progress, which is funded by dark money from a liberal Swiss billionaire named Hansörg Wyss.
Wyss also funds Arabella Advisors, a professional activism organization known for funneling hundreds of millions of dollars to left-wing organizations and hosting hundreds of ‘pop-up groups’ designed to look like standalone nonprofits when, in fact, they’re part of an Arabella campaign.
Arabella is founded by Eric Kessler, who has a direct, personal connection to the president of the Wyss Foundation, Molly McUsic. They both worked for Secretary of the Interior Bruce Babbit during the Clinton administration.
CCDH chairman Clark also has ties to a participant of Event 201 (former CIA deputy director Avril Haines).
Event 201 was a fabulously prescient coronavirus pandemic exercise held in October 2019 that foreshadowed and practiced the draconian countermeasures implemented when COVID-19 appeared mere months later.
Curiously enough, a primary focus of that exercise was not infection control and treatment, but rather how to best censor and counteract problematic narratives about the virus, public disagreement with pandemic measures and doubts about vaccine safety.
You would think that if public health were the primary impetus behind such an exercise — as opposed to wealth transfer, economic destruction and societal reformation — it would focus on the medical and scientific strategies of how to best contain and control the actual virus, and not how best to contain and control information.
Infectious disease control science would have been the key feature, not the science of social engineering.

It's Time to Follow the Science. Join our Campaign!

Who really has a profit motive?
According to the NYT, my motive for sharing COVID information is simple: “Profit”:
“Numerous experts told me that a good way to understand what motivates many players in the anti-vaccine movement is through the lens of profit. There are several levels of profiteering.
“The first involves social media companies. Historically, the algorithms that drive their platforms, some argue, have fed users more and more of what they respond to without regard for whether it’s true …
“Some ‘disinformation dozen’ figures, like Joseph Mercola, an osteopathic physician, offer products directly. He presides over a multimillion-dollar business selling supplements and other merchandise online …”
What the NYT completely ignores is that my site has been delisted by Google and I’ve been de-platformed by YouTube.
Twitter has also banned any link to my articles from being posted, so they cannot be shared. Just how is losing all primary methods of communication profitable to me?
On the flip-side, the NYT completely omits that the drug industry is motivated by profits in the billions and that COVID jab makers have paid many billions of dollars in actual fines for fraud and other kinds of criminal malfeasance.
On top of that, the NYT refuses to look into the shady connections and motivations behind the CCDH.
Profit is the least of my motives for sharing information which, by the way, has always been free. Helping as many people as possible to survive this unprecedented attack on humanity is.
Mankind has been under assault through toxic chemicals, risky drugs and nutritionally illiterate health guidelines for many decades, but now “it’s getting real,” as the kids say.
This is by far the most important battle we’ve ever faced — certainly in our own lifetime but possibly in the history of the world.
During World War II, the NYT whitewashed Nazi propaganda. Today, they’ve chosen to be on the wrong side of history yet again, because, in the end, the truth will win.
Originally published by Mercola.
The views and opinions expressed in this article are those of the authors and do not necessarily reflect the views of Children's Health Defense.

OUT OF MIND » BREAKING NEWS & HOT TOPICS » THE GREAT RESET » When Did New York Times Become a Propaganda Tool for WEF’s Great Reset?