OUT OF MIND » THE INSANITY OF REALITY » SCIENCE & TECHNOLOGY »  Scientists Have Measured a Perceptual Ability Called 'O'. How Good Is Yours?

Scientists Have Measured a Perceptual Ability Called 'O'. How Good Is Yours?

Scientists Have Measured a Perceptual Ability Called 'O'. How Good Is Yours?

Like snowflakes, no two people are exactly the same. You're probably used to the idea that people differ substantially in personality and in cognitive abilities – skills like problem-solving or remembering information.

In contrast, there's a widely held intuition that people vary far less in their ability to recognize, match or categorize objects. Many everyday tasks, hobbies and even critical jobs – like interpreting satellite imagery, matching fingerprints or diagnosing medical conditions – rely on these perceptual skills.
The common expectation is that smart and motivated people who receive the appropriate training should eventually be able to excel at occupations that require hundreds of perceptual decisions every day.
We are psychologists who measure how people compare on challenging perceptual tasks. Our research has found that this intuition that everyone has the same capacity for perceptual skills is not supported by the evidence.
It's not a problem if you choose to spend every weekend bird-watching without ever getting very good at it – you may still get some fresh air and have fun. But when perceptual decisions influence safety, health or legal outcomes, there's a case for seeking people who can achieve the best possible performance.
Our research suggests some people are just better than others at learning to discriminate things perceptually, whatever the objects may be.

A general ability to recognize things

Classic psychological studies at the turn of the 20th century discovered that performance across a range of cognitive tasks designed to test memory, math and verbal skills is correlated. In real life, this means someone who is great at sudoku is also likely to be good at memorizing their shopping list.
This finding led to the modern notion of general intelligence, describing a collection of faculties that together predict a wide range of outcomes, from income to health and longevity.
In a similar way, our studies reveal that those who are the best at bird recognition may also excel at plane identification, and they may also be the best at learning to spot tumors in chest X-rays. In other research, the same ability predicted better performance in reading musical notation or recognizing images of prepared food.
Of course, people vary in their experience with birds or medical images. The more familiar you are with them, the better you are at recognizing them. Experience and training have an important role in how people make decisions based on visual information. But does everyone start on the same footing when they begin training?

Does everyone start at square one?

We were interested in whether everyone starts at about the same baseline of perceptual talent. To investigate this question, we measured people's abilities with artificial objects they had never seen, to prevent any advantage due to different levels of experience.
In one large study, we assessed 246 people for 13 hours each, testing them on several tasks with six categories of computer-generated artificial objects. We asked people to remember and recognize objects, to match them, or to make judgments about some of their parts. 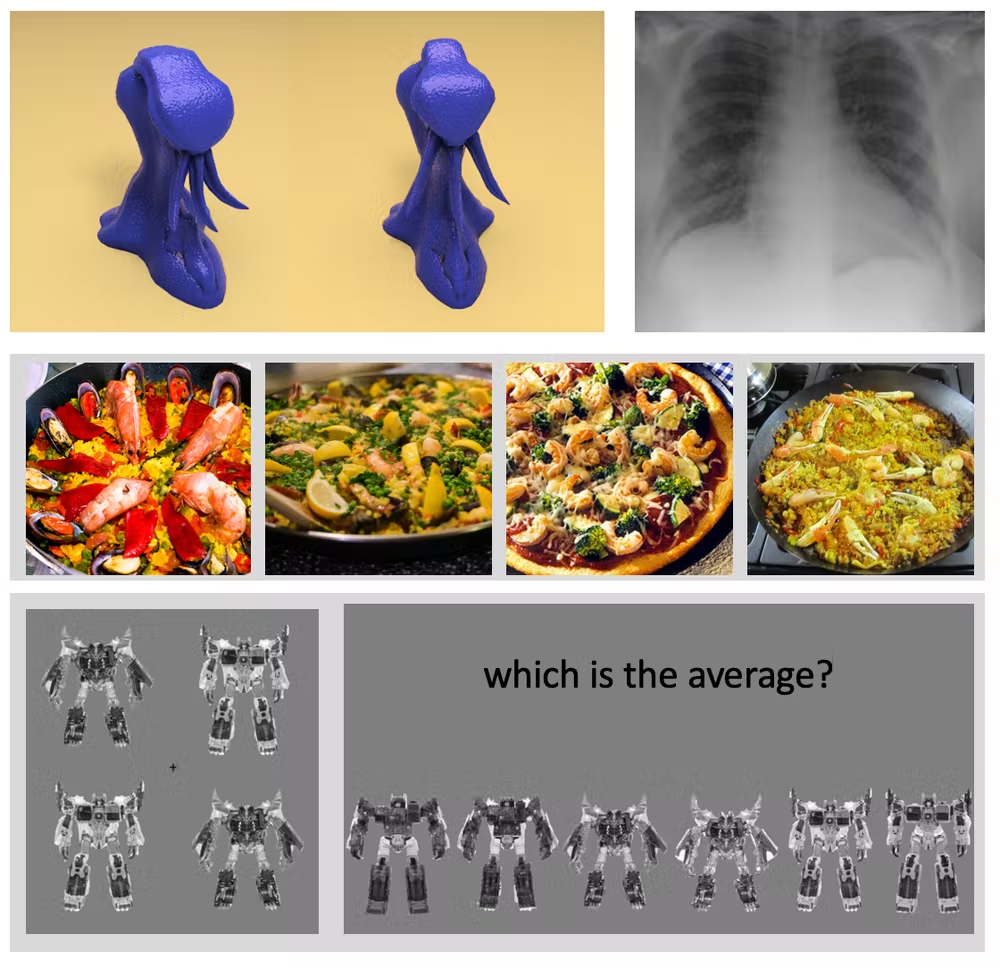 (Isabel Gauthier, CC BY-ND)
Above: Examples of tasks that tap into o, from top left: 1) Are these two objects identical despite the change in viewpoint? 2) Which lung has a tumor? 3) Which of these dishes is the oddball? 4) Which option is the average of the four robots on the right? Answers: 1) no 2) left 3) third 4) fourth.
Our results across tasks like these repeatedly reveal that people vary as much in perceptual abilities as they do in cognitive skills. Using statistical methods historically applied to intelligence and personality tests, we found that over 89 percent of the differences between people in their performance with these different tasks and categories could be explained by a general ability.

We called this ability "o" for object recognition and in honor of the "g" factor, which stands for similar statistical evidence for general intelligence.
In follow-up studies, we've found that o applies in the same way to artificial and real objects, and that people with high o are better at computing summary statistics for groups of objects (such as estimating the "average" of several objects) and also better at recognizing objects by touch. You can compare yourself to others in this short demo.

o is a distinct ability

Since it is so general, is o just another name for general intelligence? We don't think so.
In one study, we found that neither IQ nor SAT scores predict recognition of novel objects. In other work, we found that o was distinct from g, but also from the personality trait of conscientiousness. This means that book smarts may not be enough to excel in domains that rely heavily on perceptual abilities.
We tested this idea by measuring how good people with or without expertise in radiology were at detecting lung nodules in chest X-rays. Those with the highest o were better at this task, even after controlling for intelligence and experience in radiology.
This finding demonstrates the added value of measuring o. Even when medical students are selected to be smart and provided with training, it may not guarantee the highest levels of performance in specializations that rely on perceptual skills.
Many doors open when you demonstrate that you're cognitively talented, which seems only fair. But it is fair only to the extent that general intelligence is the best way – or even a sufficient way – to predict success in a given domain. Many have raised warnings that intelligence testing can lead to inequities in hiring or career placement tied to race, gender or socioeconomic status.
Over the years, many thinkers have downplayed innate talents to emphasize environmental influences. They argued that success can be shaped through years of deliberate practice, programs to change one's attitudes about learning, or even hours of playing video games.
But the evidence in favor of the influence of innate talents remains strong, and denying them or overpromising on the efficacy of environmental factors may sometimes be harmful. People can waste time and resources that could be better invested, and may run the risk of experiencing stigma if their efforts do not succeed because of factors they cannot control.
One answer to this problem is to learn more about talents beyond those related to intelligence and then to make better use of them. Classical notions of intelligence may be just one factor of many that determine overall ability.
An increased focus on perceptual abilities, specifically those that are general, could help reduce inequities. For instance, while differences in experience can drive sex differences in the recognition of objects in some familiar categories, we've found no such differences in the general ability o.

OUT OF MIND » THE INSANITY OF REALITY » SCIENCE & TECHNOLOGY »  Scientists Have Measured a Perceptual Ability Called 'O'. How Good Is Yours?