Physicists say they've found evidence in data from Europe's Large Hadron Collider for three never-before-seen combinations of quarks, just as the world's largest particle-smasher is beginning a new round of high-energy experiments.

The three exotic types of particles – which include two four-quark combinations, known as tetraquarks, plus a five-quark unit called a pentaquark – are totally consistent with the Standard Model, the decades-old theory that describes the structure of atoms.
In contrast, scientists hope that the LHC's current run will turn up evidence of physics that goes beyond the Standard Model to explain the nature of mysterious phenomena such as dark matter. Such evidence could point to new arrays of subatomic particles, or even extra dimensions in our Universe.
The LHC had been shut down for three years to upgrade its systems to handle unprecedented energy levels. That shutdown ended in April, and since then, scientists and engineers at the CERN research center on the French-Swiss border have been getting ready for today's resumption of scientific operations.
CERN's control center was abuzz as the LHC began its third run of data collection and analysis.
"It's a magic moment now," CERN Director-General Fabiola Gianotti said during today's webcast. "We just had collisions at an unprecedented energy, 13.6 tera-electronvolts, and this opens a new era of exploration at CERN."

Gianotti said the LHC's scientists expect to collect as much data during this third run as they collected over the course of 13 years during the collider's previous two runs. "This, of course, will increase our opportunities for discovery or for understanding the fundamental laws of the Universe," she said.
The 27-kilometer-round (17-mile-round) ring of superconducting magnets and its particle detectors are due to be in operation around the clock for nearly four years during Run 3.
Today's start of the run comes 10 years and a day after LHC physicists announced their biggest discovery to date: evidence for the existence of the Higgs boson, a subatomic particle that helps explain the phenomenon of mass.
The three new types of subatomic particles, described today during a CERN seminar, aren't quite Higgs-level revelations. But they do suggest that the LHC is hot on the trail to discover still more previously unseen building blocks of the Universe.
The Large Hadron Collider smashes protons together at velocities close to the speed of light to study combinations of quarks that are known as hadrons.


"The more analyses we perform, the more kinds of exotic hadrons we find," Niels Tuning, physics coordinator for the collider's LHCb detector, said in a news release.
"We're witnessing a period of discovery similar to the 1950s, when a 'Particle Zoo' of hadrons started being discovered and ultimately led to the quark model of conventional hadrons in the 1960s. We're creating 'Particle Zoo 2.0'."
LHCb spokesperson Chris Parkes said studying new combinations of quarks "will help theorists develop a unified model of exotic hadrons, the exact nature of which is largely unknown".
Most hadrons aren't so exotic. Protons and neutrons, for instance, are made up of three quarks bound together. (In fact, the origin of the word "quark" goes back to a line from Finnegan's Wake by James Joyce: "Three quarks for Muster Mark!") Pions are two-quark combinations.
Four-quark and five-quark combinations are much rarer, and are thought to exist for only an instant before decaying into different types of particles.
Quarks come in six different "flavors": up and down, top and bottom, charm and strange.

The LHCb team analyzed the decays of negatively charged B mesons and saw evidence for the existence of a pentaquark consisting of a charm quark and a charm antiquark, plus an up, down and strange quark. It's the first pentaquark known to include a strange quark.
The two newly identified tetraquarks include a "doubly electrically charged" combination of four quarks: a charm quark, a strange antiquark, an up quark, and a down antiquark.
That tetraquark was spotted in combination with its neutral counterpart, which has a charm quark, a strange antiquark, an up antiquark, and a down quark. CERN says this is the first time a pair of tetraquarks has been observed together.
Some theoretical models visualize exotic hadrons as single units of tightly bound quarks. Others see them as pairs of standard hadrons that are loosely bound together, similar to the way that atoms are bound together to form molecules.
"Only time and more studies of exotic hadrons will tell if these particles are one, the other or both," CERN says.

This article was originally published by Universe Today. Read the original article.

On July 4, 2012, physicists from the ATLAS and CMS collaborations at CERN’s Large Hadron Collider announced the observation of a Higgs boson at a mass of around 125 GeV (gigaelectronvolts). Ten years later, and with the data corresponding to the production of a 30-times larger number of Higgs bosons, the ATLAS and CMS researchers have learnt much more about the properties of the elementary particle. Their results, presented in two papers published in the journal Nature, show that the particle’s properties are remarkably consistent with those of the Higgs boson predicted by the Standard Model of particle physics. They also show that the particle is increasingly becoming a powerful means to search for new, unknown phenomena that — if found — could help shed light on some of the biggest mysteries of physics, such as the nature of the mysterious dark matter present in the Universe. 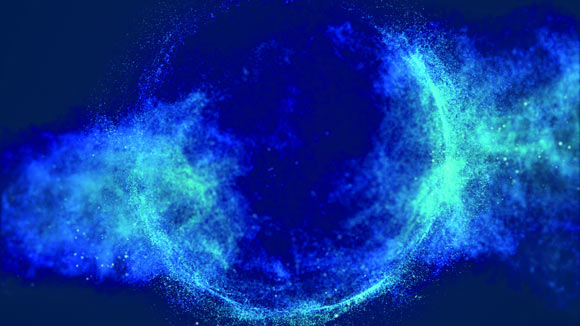 In 2012, physicists from the ATLAS and CMS experiments at CERN announced the discovery of a new boson looking very much like the Higgs boson. Image credit: Daniel Dominguez / CERN.
The Standard Model of particle physics describes the known fundamental particles and forces that make up our Universe, with the exception of gravity.
One of the central features of the Standard Model is a field that permeates all of space and interacts with fundamental particles.
The quantum excitation of this field, known as the Higgs field, manifests itself as the Higgs boson, the only fundamental particle with no spin.
In 2012, a particle with properties consistent with the Higgs boson was observed by the ATLAS and CMS experiments at the Large Hadron Collider (LHC).
Since then, more than 30 times as many Higgs bosons have been recorded by the experiments, enabling much more precise measurements and new tests of the theory.
“The Higgs boson is the particle manifestation of an all-pervading quantum field, known as the Higgs field, that is fundamental to describe the Universe as we know it,” the physicists said.
“Without this field, elementary particles such as the quark constituents of the protons and neutrons of atomic nuclei, as well as the electrons that surround the nuclei, would not have mass, and nor would the heavy particles (W bosons) that carry the charged weak force, which initiates the nuclear reaction that powers the Sun.”
To explore the full potential of the LHC data for the study of the Higgs boson, including its interactions with other particles, ATLAS and CMS combined numerous complementary processes in which the Higgs boson is produced and decays into other elementary particles.
Each of their full LHC Run 2 datasets (between 2015 and 2018) include over 10,000 trillion proton-proton collisions and about 8 million Higgs bosons.
The studies each combine an unprecedented number and variety of Higgs boson production and decay processes to obtain the most precise and detailed set of measurements to date of their rates, as well as of the strengths of the Higgs boson’s interactions with other particles.
All of the measurements are remarkably consistent with the Standard Model predictions within a range of uncertainties depending, among other criteria, on the abundance of a given process.
For the Higgs boson’s interaction strength with the carriers of the weak force, an uncertainty of 6% is achieved.
By way of comparison, similar analyses with the full Run 1 data sets resulted in a 15% uncertainty for that interaction strength.
“After just ten years of Higgs boson exploration at the LHC, the ATLAS and CMS experiments have provided a detailed map of its interactions with force carriers and matter particles,” said Dr. Andreas Hoecker, spokesperson of the ATLAS Collaboration.
“The Higgs sector is directly connected with very profound questions related to the evolution of the early Universe and its stability, as well as to the striking mass pattern of matter particles.”
“The Higgs boson discovery has sparked an exciting, deep and broad experimental effort that will extend throughout the full LHC program.”
“Sketching such a portrait of the Higgs boson this early on was unthinkable before the LHC started operating,” said CMS spokesperson Dr. Luca Malgeri.
“The reasons for this achievement are manifold and include the exceptional performances of the LHC and of the ATLAS and CMS detectors, and the ingenious data analysis techniques employed.”
The new combination analyses also provide, among other new results, stringent bounds on the Higgs boson’s interaction with itself and also on new, unknown phenomena beyond the Standard Model, such as on Higgs boson decays into invisible particles that may make up dark matter.
_____
ATLAS Collaboration. A detailed map of Higgs boson interactions by the ATLAS experiment ten years after the discovery. Nature, published online July 4, 2022; doi: 10.1038/s41586-022-04893-w
CMS Collaboration. A portrait of the Higgs boson by the CMS experiment ten years after the discovery. Nature, published online July 4, 2022; doi: 10.1038/s41586-022-04892-x