A fast radio burst (FRB) dubbed FRB 20191221A persists for up to three seconds, about 1,000 times longer than the average FRB; within this window, astronomers from the CHIME/FRB Collaboration detected bursts that repeat every 217 ms in a clear periodic pattern, similar to a beating heart. 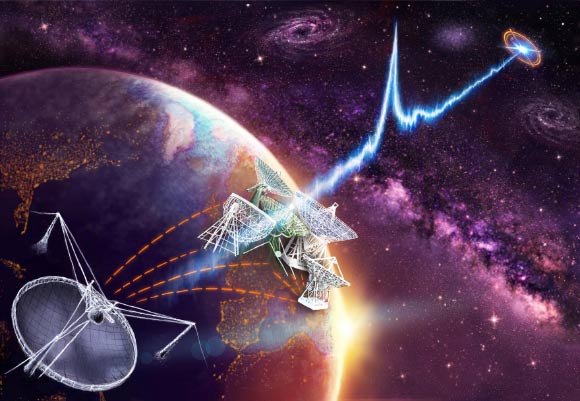 The globally distributed dishes of the European VLBI Network are linked with each other and the 305-m William E. Gordon Telescope at the Arecibo Observatory in Puerto Rico. Together they have localized FRB121102’s exact position within its host galaxy. Image credit: Danielle Futselaar, www.artsource.nl.
FRBs are millisecond-duration flashes of radio waves that are visible at distances of billions of light years and exhibit the characteristic dispersion sweep of radio pulsars.
These events emit as much energy in one millisecond as the Sun emits in 10,000 years, but the physical phenomenon that causes them is unknown.
Theories range from highly magnetized neutron stars, blasted by gas streams near to a supermassive black hole, to suggestions that the burst properties are consistent with signatures of technology developed by an advanced civilization.
The vast majority of FRBs observed to date are one-off; but recently, astronomers discovered FRB 180916.J0158+65 — the first periodic FRB that appeared to emit a regular pattern of radio waves.
That signal consisted of a four-day window of random bursts that then repeated every 16 days.
The 16-day cycle indicated a periodic pattern of activity, though the signal of the actual radio bursts was random rather than periodic.
On December 21, 2019, astronomers from the CHIME/FRB Collaboration picked up a signal of a potential FRB.
“FRB 20191221A was unusual,” said Dr. Daniele Michilli, an astronomer at MIT’s Kavli Institute for Astrophysics and Space Research.
“Not only was it very long, lasting about three seconds, but there were periodic peaks that were remarkably precise, emitting every fraction of a second like a heartbeat.”
“This is the first time the signal itself is periodic.” 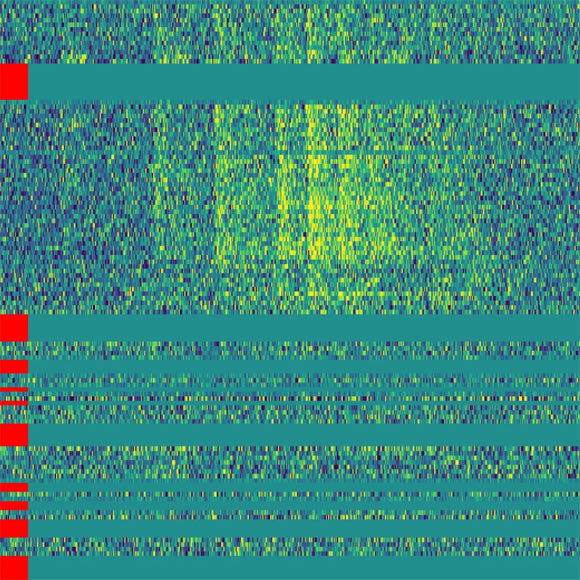 Waterfall plot of the intensity of radio signal from FRB 20191221A as a function of time and frequency. Image credit: Andersen et al., doi: 10.1038/s41586-022-04841-8.
In analyzing the pattern of FRB 20191221A’s bursts, Dr. Michilli and colleagues found similarities with emissions from radio pulsars and magnetars in our own Galaxy.
“Radio pulsars are neutron stars that emit beams of radio waves, appearing to pulse as the star rotates, while a similar emission is produced by magnetars due to their extreme magnetic fields,” they said.
“The main difference between the new signal and radio emissions from our own Galactic pulsars and magnetars is that FRB 20191221A appears to be more than a million times brighter.”
“The luminous flashes may originate from a distant radio pulsar or magnetar that is normally less bright as it rotates and for some unknown reason ejected a train of brilliant bursts, in a rare three-second window that CHIME was luckily positioned to catch.”
The astronomers hope to catch additional bursts from the periodic FRB 20191221A, which can help to refine their understanding of its source, and of neutron stars in general.
“This detection raises the question of what could cause this extreme signal that we’ve never seen before, and how can we use this signal to study the Universe,” Dr. Michilli said.
“Future telescopes promise to discover thousands of FRBs a month, and at that point we may find many more of these periodic signals.”
The findings were published in the journal Nature.
_____
B.C. Andersen et al. (CHIME/FRB Collaboration). 2022. Sub-second periodicity in a fast radio burst. Nature 607, 256-259; doi: 10.1038/s41586-022-04841-8