Webb Team Releases Test Images of Jupiter and Its Moons

Several images of Jupiter and its moons as well as images and spectra of solar system asteroids from Webb’s commissioning period are now available on the Mikulski Archive for Space Telescopes. 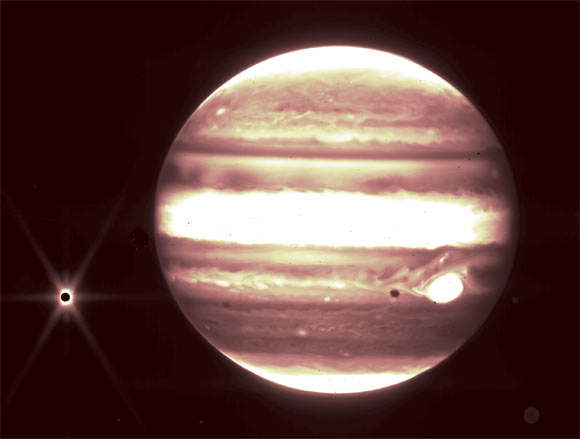 This image from Webb’s NIRCam instrument 2.12 micron filter shows Jupiter (center) and its moon Europa (left). Image credit: NASA / ESA / CSA / B. Holler & J. Stansberry, STScI.
The new image from the short-wavelength filter of Webb’s Near-Infrared Camera (NIRCam) shows distinct bands that encircle Jupiter as well as the famous Great Red Spot.
The iconic spot appears white in this image because of the way Webb’s infrared image was processed.
“Combined with the deep field images released the other day, these images of Jupiter demonstrate the full grasp of what Webb can observe, from the faintest, most distant observable galaxies to planets in our own cosmic backyard that you can see with the naked eye from your actual backyard,” said Dr. Bryan Holler, a scientist at the Space Telescope Science Institute.
Clearly visible at left is Europa, the smallest of the four Galilean moons orbiting Jupiter.
What’s more, Europa’s shadow can be seen to the left of the Great Red Spot.
“I couldn’t believe that we saw everything so clearly, and how bright they were,” said Webb’s deputy project scientist Dr. Stefanie Milam, a researcher at NASA’s Goddard Space Flight Center.
“It’s really exciting to think of the capability and opportunity that we have for observing these kinds of objects in our Solar System.” 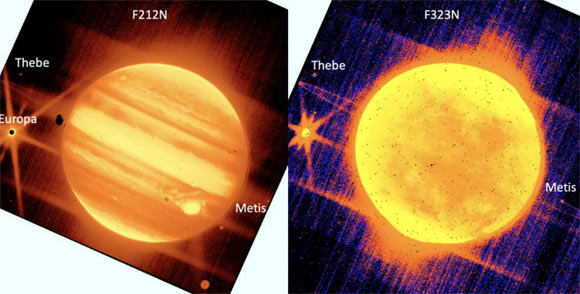 Left: Jupiter (center) and its moons Europa, Thebe, and Metis are seen through the NIRCam instrument 2.12 micron filter. Right: Jupiter and Europa, Thebe, and Metis are seen through NIRCam’s 3.23 micron filter. Image credit: NASA / ESA / CSA / B. Holler & J. Stansberry, STScI.
The Webb astronomers were especially eager to see these images because they are proof that the telescope can observe the satellites and rings near bright solar system objects such as Jupiter, Saturn, and Mars.
They will use Webb to explore the tantalizing question of whether we can see plumes of material spewing out of moons like Europa and Saturn’s moon Enceladus.
Webb may be able to see the signatures of plumes depositing material on the surface on Europa.
“I think that’s just one of the coolest things that we’ll be able to do with this telescope in the Solar System,” Dr. Milam said.
Additionally, Webb easily captured some of Jupiter’s rings, which especially stand out in the NIRcam long-wavelength filter image.
“That the rings showed up in one of Webb’s first solar system images is absolutely astonishing and amazing,” Dr. Milam said.
“The Jupiter images in the narrow-band filters were designed to provide nice images of the entire disk of the planet, but the wealth of additional information about very faint objects (Metis, Thebe, the main ring, hazes) in those images with approximately one-minute exposures was absolutely a very pleasant surprise,” said Webb’s NIRCam commissioning lead Dr. John Stansberry, a researcher at the Space Telescope Science Institute.
_____
This article is based on text provided by the National Aeronautics and Space Administration.