The body of a perfectly preserved, carefully mummified an alien was
found buried in an ancient pyramid. A mysterious creature from between
150 and 160 centimeters was found by an archaeologist near Lahun when
exploring a small pyramid near the Dynasty doceaba of Senusret II.
However, this fact was not revealed immediately. “The mummy of what
appears to be an alien, dates back more than 2000 years and it seems it
would be a humanoid” said a source at the Egyptian Antiquities
Department, who provided details and photographs of the find but did so
under condition anonymity. “ 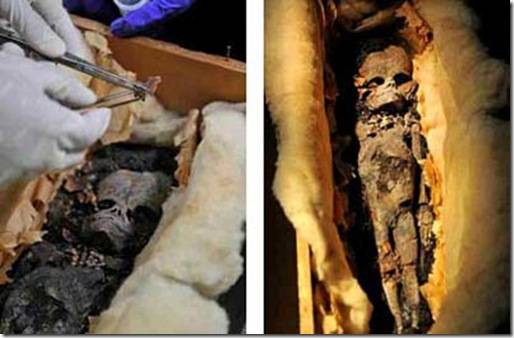 These remains like an alien strangers have created much controversy in the world.

Some online sources said that this is a species-being for its fur and
reptilian traits that characterize them, such as their eyes, too large
and oval shaped. Inscriptions on the tomb of the mummy showed that the
king was a counselor named Osirunet, meaning star or sent from heaven. ”
The mummified body was buried with great respect and care, accompanied
by a number of strange objects far from the archaeological museum
managers can not identify.

According to Egyptian sources, the alien mummy was discovered by Dr.
Viktor Lubek, Czechoslovakian citizen and retired professor of the
University of Pennsylvania. Archaeologist located the hidden compartment
while conducting an investigation into a small pyramid south of the
main pyramid, Senusret II, which contains the queen of the pharaoh. At
the site also found some gold and clay mixtures covering the body, and
traces of cloth linen like appearance, the skin covering the enigmatic
being.

» The extraterrestrial mummy found by the KGB in Egypt
» Rare Human-Shaped Sarcophagus With An Unidentified Well-Preserved 3,600-Year-Old Mummy Unearthed In Egypt
»  MUMMY of an ANCIENT ASTRONAUT found by the KGB, July 2015, UFO Sighting News.
» Alien Mummy Found In a Pyramid – Archaeologists Baffled
» Ancient Mummy found in northwest Indiana could be 2,000 years old