Something Weird Has Been Discovered at the Bottom of the Atlantic and Scientists Can’t Explain It Wed Jul 27, 2022 12:31 am

Admin
Posts : 106268
Join date : 2012-01-04
Location : Woodstock Nation
Something Weird Has Been Discovered at the Bottom of the Atlantic and Scientists Can’t Explain It

Scientists exploring the bottom of the Atlantic Ocean have stumbled upon something they cannot explain. Scientists exploring the bottom of the Atlantic Ocean have stumbled upon something they cannot explain: An organized series of holes in the seafloor. The strange discovery was made on July 23. The photographs depict dots that “look almost human made” connecting into straight lines.
So far, NOAA Ocean Exploration has been unable explain it.
“We observed several of these sublinear sets of holes in the sediment. These holes have been previously reported from the region, but their origin remains a mystery,” NOAA Ocean Exploration reported. “While they look almost human made, the little piles of sediment around the holes make them seem like they were excavated by … something.”

While visiting the summit of an underwater volcano north of the Azores on July 23, the dive reached depths of 1.7 miles.The holes were discovered on a flat, sandy surface, as can be seen in photographs supplied by NOAA.
To safely document the discovery, a remotely controlled camera was deployed. Photos show the holes interrupted what is otherwise a solid, flat sandy surface on the Atlantic seafloor. NOAA Ocean Exploration
The public was asked to submit theories, but people have so far just raised more questions, such as whether the holes were caused by someone taking core samples.

“Is that an object or animal inside the holes? Does that line run in the same direction as the current?” Anthony Narehood asked.
“Water from underground springs?” Mike Weathersby posted.
“What about gas methane?” Eduardo Pogorelsky said.

On Saturday's #Okeanos dive, we saw several sublinear sets of holes in the seafloor. The origin of the holes has scientists stumped. The holes look human made, but the little piles of sediment around them suggest they were excavated by...something. What's YOUR hypothesis? 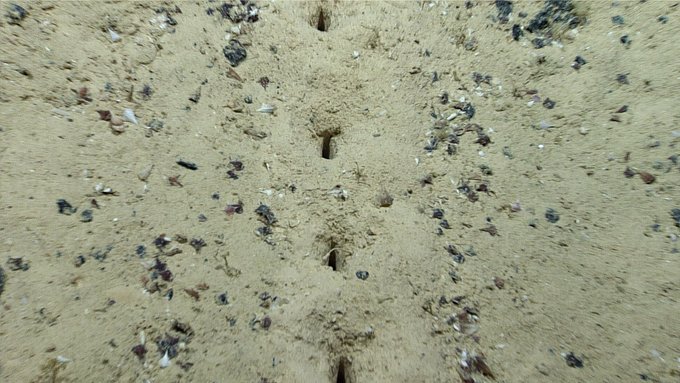 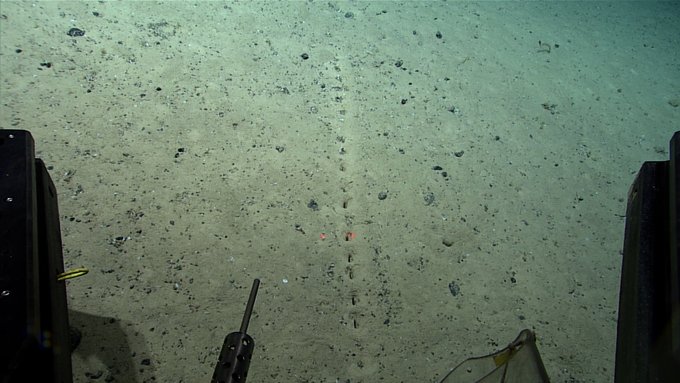