UFOs In Space Recorded During Space Shuttle and Apollo Missions

UFOs In Space Recorded During Space Shuttle and Apollo Missions

Although NASA is commissioning a study team to start early in the fall to examine unidentified aerial phenomena (UAPs) – that is, observations of events in the sky that cannot be identified as aircraft or known natural phenomena as well as NASA wants to transform satellites into alien seekers to probe unexplained sightings in space, it might be better that NASA check their archive first as overwhelming evidence is present on footage from, among others, the Space Shuttle and Apollo Missions showing UFOs in space and above the Lunar surface.
Proof of the existence of UFOs what they have withheld from the public all the years.

During the Space Shuttle flights many recordings were made by the astronauts. Some of these recordings show objects in space that clearly cannot be meteorites, space junk, or lightning storms.

These objects change direction, slow down, make 90 and 180 degree turns before speeding up and disappearing into space. Only UFOs or unknown probes under intelligent control can perform this kind of maneuvers.

Also during the Apollo flights, recordings were made by the astronauts in which UFOs can be seen.

One such example is the footage recorded by the Apollo 11 crew showing a UFO flying just above the moon's surface.

And what about the astronaut who saw a UFO during the Apollo 17 Mission.

Normally NASA astronauts follow a "script" and they know exactly what and when to say. 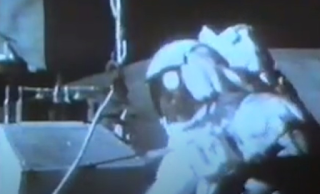 But during the Apollo 17 mission this astronaut however was too shocked by something he had never seen before. He forgets his "lines" and no longer follows the script. Instead a long and not planned discussion and conversation starts. The astronaut is truly amazed. Unlike his colleague, who seems to be in charge. The astronaut asks what these objects were that flew over his head. Than it becomes hilarious. Flabbergasted, the second astronaut does also not know what to say! This was not planned and not in the script. He is however aware of the fact that they are being watched by NASA officials.

After a short period of silence he says that it was a blast coming from the dial shaped disc of the high gain antenna on the rover (vehicle). More objects start flying over and again we hear genuine excitement. Than the astronaut realizes that he had said something he should not have said in front of the cameras and NASA. He reluctantly accepts the vague explanation. He is really annoyed and you hear sarcasm and disbelief in the undertone of his voice.

NASA tries to save this unpleasant situation and intervenes as CAPCOM confirms that it was a blast from the antenna and that it happened before.

According to the astronaut who clearly is in charge, this blast from the antenna is just "routine".

This is an interesting video. Styrofoam blowing up? This has happened before? When this really would be the case, would they not have taken countermeasures? Space programs are planned with utmost precision and they do not take any risks with equipment and astronauts. So what do you think after having seen the footage? Was it a blast from the antenna? Exploding Styrofoam?

Or is someone not telling us the truth and these two astronauts had a couple "visitors" passing by.

» Supposed Unreleased Images from The Apollo Missions They Don’t Want You To See
» Ex Space Shuttle Worker New Witness to Secret Space Program
» It’s 2019. Why Haven’t Humans Gone Back to the Moon Since the Apollo Missions?
» NASA releases New Apollo 16 Footage, Which Is Proof They Faked The Missions
» NASA Spooked During UFO Sighting At Space Shuttle 4/30/16