The Friedman School of Nutrition Science and Policy’s Food Compass, unveiled in late 2021, is another Great Reset tool designed to discourage the consumption of animal foods by falsely rating them as unhealthy, and encouraging consumption of ultra-processed foods by giving them high nutritional ratings. 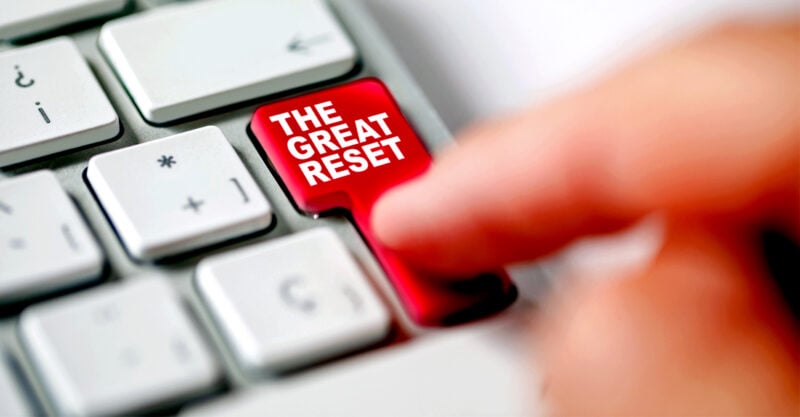 Miss a day, miss a lot. Subscribe to The Defender's Top News of the Day. It's free.
Story at a glance:

In recent months, I’ve dedicated many articles to exposing the intentional destruction of our food system. The decision of the Dutch government to impose nitrogen pollution restrictions on farmers is but one example of this.
This “green” policy will [url=https://plantbasednews.org/news/environment/dutch-farmers-reduce-livestock/#:~:text=Dutch Farmers Face Calls To Reduce Livestock By,to cut livestock production by almost a third]cut livestock production[/url] in the country by 30% in the next year, put farmers out of business, and force them to sell their land.
Since The Netherlands is the largest meat exporter in the European Union, it will also result in meat shortages around the world.
According to Dutch Parliament member Thierry Baudet, this “green” policy is really a thinly veiled excuse for a land grab.
The government is following the script of The Great Reset, he says, which requires weakening the country, making it more dependent on food imports, and diluting nationalism by taking in more immigrants. And, to make room for immigrant housing, they need to take land from the farmers.
At the same time, Bill Gates is buying up high-priced farmland and telling the world to transition from beef to lab-grown meat alternatives. Insect farms to create human protein alternatives are also being set up and promoted, farms and food facilities are mysteriously being burnt to the ground at surprising frequency, and the Rockefeller Foundation is calling for restructuring the whole food system to make it more “fair and equitable.”
These things are not happening by chance. It’s all part of a plan to eliminate naturally-grown foods so they can then be replaced with patented foodstuffs, which this “New World Order” cabal of course owns.

Food Compass to further destroy nutrition guidance
The hidden globalist cabal has been busy undermining health for decades, and if you want an example of what I’m talking about, look no further than the Friedman School of Nutrition Science and Policy’s Food Compass, unveiled in late 2021.
As explained by Tufts Now:
“A scientific team at the Friedman School of Nutrition Science and Policy at Tufts has developed a new tool to help consumers, food companies, restaurants, and cafeterias choose and produce healthier foods and officials to make sound public nutrition policy.
“Food Compass is a new nutrient profiling system, developed over three years, that incorporates cutting-edge science on how different characteristics of foods positively or negatively impact health … The new Food Compass system was developed and then tested using a detailed national database of 8,032 foods and beverages consumed by Americans.
“It scores 54 different characteristics across nine domains representing different health-relevant aspects of foods, drinks, and mixed meals, providing for one of the most comprehensive nutrient profiling systems in the world.
“The characteristics and domains were selected based on nutritional attributes linked to major chronic diseases such as obesity, diabetes, cardiovascular problems, and cancer, as well as to risk of undernutrition, especially for mothers, young children, and the elderly …
“Potential uses of Food Compass include:

All of that sounds good, in theory. The problem is that Food Compass clearly was not created to guide people toward optimal health through nutrition. Its primary purpose is to lead people away from wholesome natural foods, toward processed junk foods.
Absurd food ranking tool to mislead the masses
While the food score example given by Tufts Now is not overly heinous, a deeper dive into the system reveals serious problems. Case in point: Frosted Mini Wheats scores three times higher than ground beef (87 out of 100, compared to 26), as illustrated in the graph below, posted on Twitter by independent journalist Nina Teicholz. 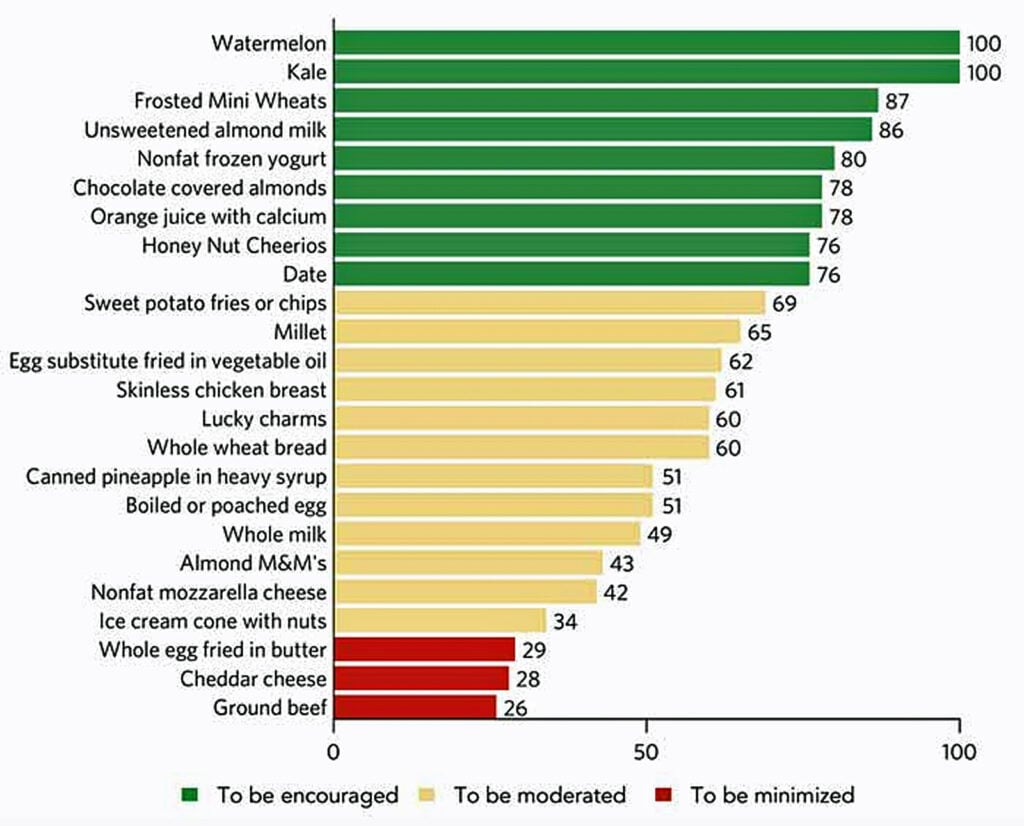 The fact that “egg substitute fried in vegetable oil” gets a score above zero is a frightening demonstration of their fundamental nutrition ignorance of the foundational fact that excessive omega-6 fats in the form of industrially processed seed oils are the most pernicious poisons in the food supply.
The high scores of fries, Lucky Charms, Honey Nut Cheerios, chocolate-covered almonds and almond M&Ms certainly don’t help.
Who in their right mind can believe M&Ms are healthier than whole food — any whole food? According to Food Compass, anything with a score below 30 should be minimized, so based on this tool, you’ll be healthier if you replace whole egg, cheddar cheese and ground beef with literal candy, which is nothing short of insanity.
Based on this tool, the government would also be justified in restricting the marketing of beef, egg and cheese to children, while schools could be encouraged to load M&Ms into school lunches.
The whole thing is absurd and indefensible.
In a July 25 Substack article, Teicholz also pointed out that one of the creators of Food Compass, Dariush Mozaffarian, dean of the Tufts Friedman School of Nutrition Science and Policy, is also part of the development team for the White House conference on nutrition, scheduled to take place in September.
As noted by Teicholz, this doesn’t bode well:
“The Food Compass, which gives top ratings to Cheerios, Lucky Charms and Cocoa Puffs, is absurd on the face of it. In all, nearly 70 brand-named cereals from General Mills, Kellogg’s, and Post are ranked twice as high as eggs cooked in butter or a piece of plain, whole-wheat toast …
“What kind of dystopian world has nutrition “science” entered into whereby a university, a peer-reviewed journal, and one of the field’s most influential leaders legitimize advice telling the public to eat more Lucky Charms and fewer eggs? Simply eyeballing these recommendations should be enough to know this diet is a get-sick, diabetes diet, a high-carb, sugar-laden, candy-coated highway to ill-health …
“Since Mozaffarian is widely credited with being the driving force behind the upcoming White House conference, his views on nutrition are worth examining. If he and his team at Tufts really think Frosted Mini Wheats are a super food, there’s clearly reason to have some concerns about the outcome of this event.”
Reductionist assumptions can be disastrous
In an undated white paper, eight authors review “the limitations of the Food Compass Nutrient Profiling System.”
As noted in the abstract:
“Nutrient Profiling Systems provide algorithms which are designed to assess the healthfulness of foods based on nutrient composition and intended as a strategy to improve diets.
“Many Nutrient Profiling Systems are founded on a reductionist assumption that the healthfulness of foods is determined by the sum of their nutrients, with little consideration for the extent and purpose of processing and its health implications.
“A novel Nutrient Profiling System called Food Compass attempted to address existing gaps and provide a more holistic assessment of the healthfulness of foods.
“While a conceptually impressive effort, we propose that the chosen algorithm is not well justified and produces results that fail to discriminate for common shortfall nutrients, exaggerate the risks associated with animal-source foods, and underestimate the risks associated with ultra-processed foods.
“We caution against the use of Food Compass in its current form to inform consumer choices, policies, programs, industry reformulations, and investment decisions.”
The team correctly stresses that “health is not determined by the consumption of single foods but rather by overall diet quality.” Of crucial importance is whether a food has been processed, and what kind of processing it has undergone.
“Food processing is not invariably benign,” the authors write, noting that “While acknowledging there is a large variation in the health effects of different types of ultra-processed foods (UPF), in general, the higher the share of UPF in the diet the higher the risk of non-communicable diseases.”
There’s absolutely no shortage of studies showing that diets high in processed foods lead to poor health and depression, and the more processed your diet is, the worse your health and the greater your risk of obesity and chronic diseases that shave years, if not decades, off your life span.
In my references, I’ve included several studies published in 2020, 2021 and 2022, but similar findings have been published for decades. Remember, in most processed foods seeds oils are the highest percentage of calories.
Ultra-processed diets lead to an early grave
For example, a February 2021 study found those with the highest intakes of ultra-processed food were, on average, 58% more likely to die of cardiovascular disease (CVD) compared to those with the lowest intake, 52% more likely to die of ischemic heart disease, and 26% more likely to die from any cause.
As noted by the authors, “These findings should serve as an incentive for limiting consumption of UPF, and encouraging natural or minimally processed foods …”
Another meta-analysis, also published in February 2021, found:
“… the highest UPF consumption was associated with a significant increase in the risk of overweight/obesity (+39%), high waist circumference (+39%), low HDL-cholesterol levels (+102%) and the metabolic syndrome (+79%) …
“For prospective cohort studies evaluating a total population of 183,491 participants followed for a period ranging from 3·5 to 19 years, the highest UPF consumption was found to be associated with an increased risk of all-cause mortality in five studies (risk ratio (RR) 1·25…), increased risk of CVD in three studies (RR 1·29…), cerebrovascular disease in two studies (RR 1·34…) and depression in two studies (RR 1·20…).
“In conclusion, increased UPF consumption was associated … with a worse cardiometabolic risk profile and a higher risk of CVD, cerebrovascular disease, depression and all-cause mortality.”
As detailed in “Ultraprocessed Food Makes You Vulnerable to COVID-19,” a processed food diet is precisely the wrong choice at a time when infectious disease is widespread, as it causes metabolic dysfunction, impairs your gut microbiome and harms your immune system.