OUT OF MIND » CHANGING ENVIRONMENT & NATURE » ATMOSPHERIC CHANGES » Bright Green Meteors Seem to Be Raining Down on New Zealand, But Why?

Bright Green Meteors Seem to Be Raining Down on New Zealand, But Why?

Bright Green Meteors Seem to Be Raining Down on New Zealand, But Why?

New Zealand may seem to be under meteor bombardment at the moment. After a huge meteor exploded above the sea near Wellington on July 7, creating a sonic boom that could be heard across the bottom of the South Island, a smaller fireball was captured two weeks later above Canterbury.

Fireballs Aotearoa, a collaboration between astronomers and citizen scientists which aims to recover freshly fallen meteorites, has received a lot of questions about these events. One of the most frequent is about the bright green color, and whether it is the same green produced by auroras.

A bright green meteor. (Greg Price)
Green fireballs have been reported and filmed in New Zealand regularly. Bright meteors often signal the arrival of a chunk of asteroid, which can be anywhere between a few centimeters to a meter in diameter when it comes crashing through the atmosphere.
Some of these asteroids contain nickel and iron and they hit the atmosphere at speeds of up to 60 km (37 miles) per second. This releases an enormous amount of heat very quickly, and the vaporized iron and nickel radiate green light.
But is this the same as the bright green of an aurora? For the most recent meteor, the answer is mainly no, but it's actually not that simple. 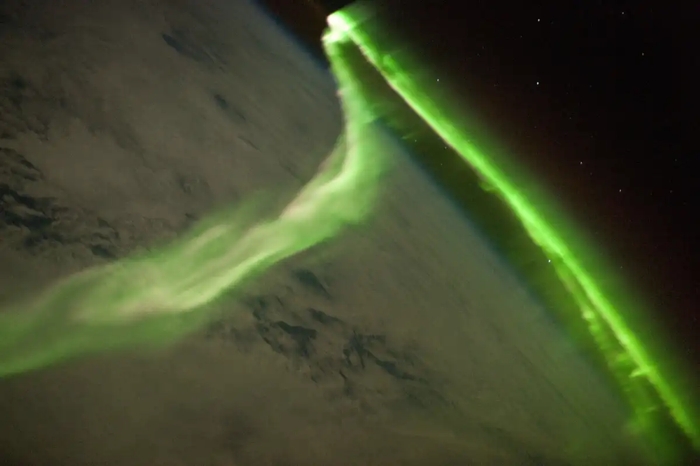 The colors of a meteor trail

The green glow of the aurora is caused by oxygen ions in the upper atmosphere, created by collisions between atmospheric oxygen molecules and particles ejected by the sun.
These oxygen ions recombine with electrons to produce oxygen atoms, but the electrons can persist in an excited state for several seconds. In an energy transition known as "forbidden" because it does not obey the usual quantum rules, they then radiate the auroral green light at 557 nm wavelength.

A meteor can also shine by this route, but only if it's extremely fast. Very fast meteors heat up in the thin atmosphere above 100 km where auroras form.
If you want to see a green auroral wake from a meteor, watch out for the Perseid meteor shower, which has now started and will peak on August 13 in the Southern Hemisphere.
Also arriving at about 60 km per second, the Perseids are extremely fast bits of the comet Swift-Tuttle. Some Perseids trail a beautiful, glowing and distinctly green wake behind them, particularly at the start of their path.
Once the Canterbury meteor hit on July 22, the capricious winds of the upper atmosphere twisted the gently glowing trail, resulting in a pale yellow glow towards the end (as seen in the GIF below, also recorded by Greg Price for an earlier meteor).
This is caused by sodium atoms being continually excited in a catalytic reaction involving ozone.

Are we being bombarded by meteors?

Yes and no. The arrival of big, booming green meteors and the dropping of meteorites isn't rare in New Zealand, but it is rare to recover the rock. Fireballs Aotearoa is working to improve the recovery rate.
In an average year, perhaps four meteorites hit New Zealand. We're encouraging citizen scientists to build their own meteor camera systems so they can catch these events.
By comparing the meteor against the starry background and triangulating images caught by multiple cameras, we can pin down the meteor's position in the atmosphere to within tens of meters. 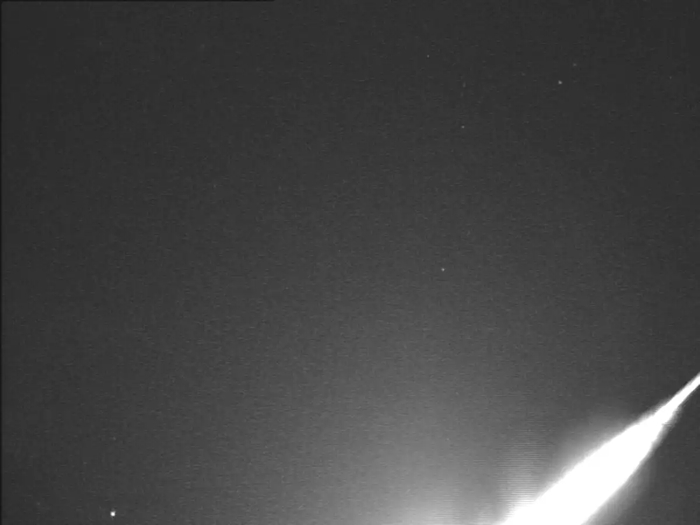 The July 22 meteor as seen by a specialized meteor camera. (Campbell Duncan/NASA/CAMS NZ)
Not only does that help us find the rock, but it tells us what the pre-impact orbit of the meteoroid was, which in turn tells us which part of the solar system it came from. This is a rather efficient way of sampling the Solar System without ever having to launch a space mission. 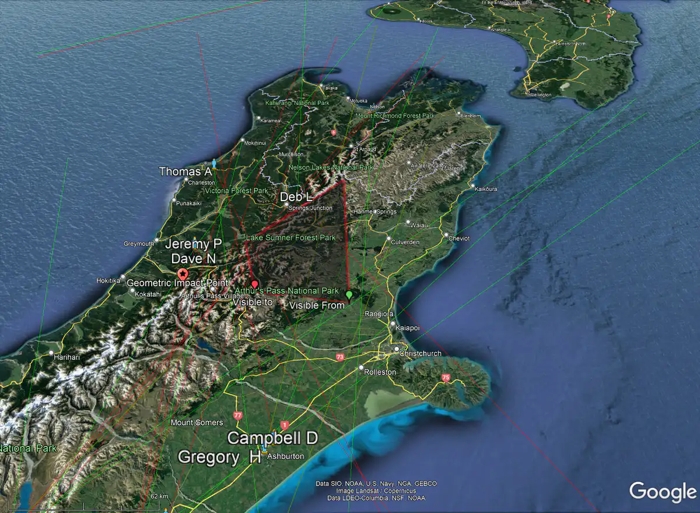 (Fireballs Aotearoa and International Meteor Association)
Above: Witness reports and high-resolution meteor cameras help to calculate a meteor's trajectory. This map shows the approximate trajectory of the July 22 meteor at the top of the red shape in the center.
Fireballs Aotearoa is rapidly populating Otago with meteor cameras and there are half a dozen more in other parts of the South Island. The North Island isn't well covered yet, and we're keen for more people (in either island) to build or buy a meteor camera and keep it pointed at the sky.
Then next time a bright meteor explodes with a boom above New Zealand, we may be able to pick up the meteorite and do some good science with it.
Many thanks for the input from Jim Rowe of the UK Fireball Alliance, and Greg Price who photographed the July 22 meteor and the persistent train.

This article is republished from The Conversation under a Creative Commons license. Read the original article.

OUT OF MIND » CHANGING ENVIRONMENT & NATURE » ATMOSPHERIC CHANGES » Bright Green Meteors Seem to Be Raining Down on New Zealand, But Why?