Swiss Bank Wegelin to Close after US Tax Evasion Fine 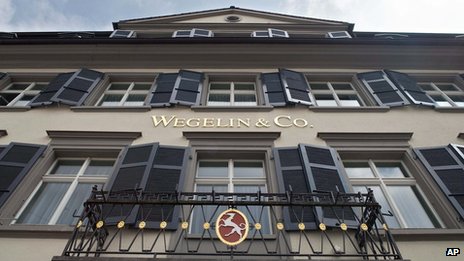 Thank you to Grammy J on the Universal Voice FB page for help in staying current today.


Switzerland’s oldest bank is to close
permanently after pleading guilty in a New York court to helping
Americans evade their taxes.

It said that once this was completed, it “will cease to operate as a bank”.

The bank had admitted to allowing more than 100 American citizens to
hide $1.2bn from the Internal Revenue Service for almost 10 years.

Wegelin, based in the small Swiss town of St Gallen, started in business 35 years before the US declaration of independence.

It becomes the first foreign bank to plead guilty to tax evasion charges in the US.

Other Swiss banks have in recent years moved to prevent US citizens from opening offshore accounts.

US Attorney Preet Bharara said: “The bank willfully and
aggressively jumped in to fill a void that was left when other Swiss
banks abandoned the practice due to pressure from US law enforcement.”
He added that it was a “watershed moment in our efforts to hold to
account both the individuals and the banks – wherever they may be in the
world – who are engaging in unlawful conduct that deprives the US
Treasury of billions of dollars of tax revenue”.

Otto Bruderer, a managing partner at the bank, admitted that Wegelin
had sheltered US clients from tax between 2002 and 2010, and said it was
aware that its conduct had been “wrong”.

Mr Burderer’s further admission that assisting tax evasion was common
practice in Switzerland has caused huge concern among the Swiss banking
community, according to the BBC’s Switzerland correspondent, Imogen
Foulkes.

“Some Swiss financial analysts are already speculating that Wegelin’s
$58m fine, which many had expected to be higher, was kept low by the US
authorities in return for Wegelin clearly implicating the rest of the
Swiss banking community in tax evasion,” she said.

Wegelin effectively ceased to function as a Swiss bank almost a year ago.

US criminal accusations against three of its executives prompted the
bank to sell off its core Swiss and other non-US businesses in January
2011.

The rushed sale protected Wegelin’s non-US clients from the fall-out
of any legal battle, and reflected fears that few clients would want to
continue doing business with a bank being pursued by the US anyway.

The businesses were bought by Raiffeisen Bank, Switzerland’s
co-operative bank, which has since severed the few business ties that it
had with the US.

The sale left Wegelin responsible only for its American clients, including those at the centre of the US authorities’ probe.

Wegelin as an institution was then itself indicted by US
authorities in February last year, and later declared a fugitive from
justice when the bank’s executives failed to appear in a US court.
The bank had vowed to fight the charges, claiming that because it
only had branches in Switzerland, it was bound only by its home
country’s relaxed banking laws.

Its decision to cave in, and wind down its one remaining business, has made the bank’s demise inevitable.

“Usually when you cave in to the USA, you do it because you just want
to get rid of it,” said Dr Peter V Kunz, an economic law professor at
the University of Bern.

Having sold off all its non-US businesses, Mr Kunz believes the
bank’s partners would have been keen to end a potentially interminable
legal dispute with the US in order to recover as much of the sale
proceeds as possible from what had in effect become a shell company.

The desire to end the legal battle would have been given added pique
by the fact that Wegelin’s partners have personal financial liability
for the bank.

Jeffrey Neiman, a former US federal prosecutor who was involved in a
previous investigation into Swiss banks, said: “It is unclear whether
the bank was required to turn over American client names who held secret
Swiss bank accounts.

“What is clear is that the Justice Department is aggressively
pursuing foreign banks who have helped Americans commit overseas tax
evasion.”

It remains to be seen whether US authorities will continue with, or
drop, parallel charges against three Wegelin bankers, Michael Berlinka,
Urs Frei and Roger Keller.

The decision to throw in the towel also marks a turnaround for Konrad
Hummler, Wegelin’s managing director since 1991, and one of the
partners whose own personal finances were potentially at stake.

Mr Hummler, who is also chairman of the Swiss daily newspaper Neuer
Zuercher Zeitung, has previously been unusually outspoken among Swiss
bankers in calling for the country’s authorities to block any disclosure
of banking client details to the US authorities.

The Wegelin case comes four years after a far larger Swiss bank, UBS,
agreed to pay a $780m fine to US authorities related to tax evasion
charges. UBS also agreed to reveal the details of US account holders.

However, UBS neither pleaded nor was found guilty. Instead it and US
prosecutors came to what is called a deferred prosecution agreement,
with the fine being paid in exchange for the charges being dropped.

Switzerland’s other major bank, Credit Suisse – with over a trillion
dollars in total assets and another trillion in clients’ money – remains
under investigation by the US authorities, as does another high profile
bank, Julius Baer, which is about a fifth of the size of Credit Suisse,
as well as 11 other mainly local, cantonal banks.

More on This Story