OUT OF MIND » BREAKING NEWS & HOT TOPICS » THE GREAT DIE OFF » Fauci Not ‘Telling It Like It Is, According to Covid19 Commission Chair

Fauci Not ‘Telling It Like It Is, According to Covid19 Commission Chair 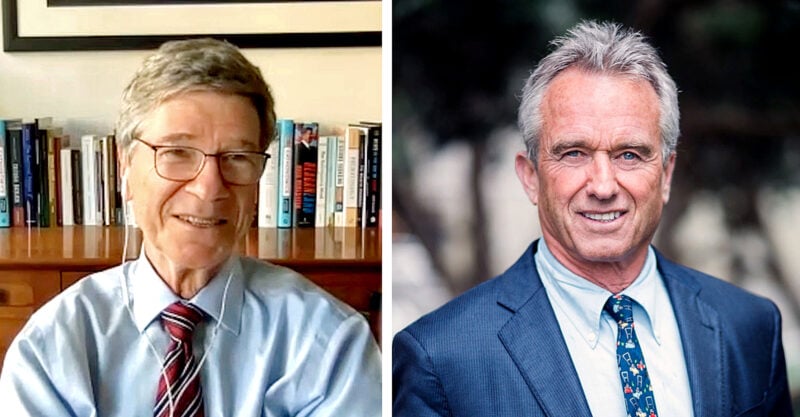 By  Suzanne Burdick, Ph.D.
In an interview on “RFK Jr. The Defender Podcast,” Jeffrey Sachs, Ph.D.,* chair of the COVID-19 Commission, explains why he changed his mind about the possibility SARS-CoV-2 leaked from a lab, and why he believes Dr. Anthony Fauci is not being honest with the public.
The most scientific, plausible origin of the COVID-19 pandemic is “very worrisome,” according to Jeffrey Sachs, Ph.D., chair of the COVID-19 Commission for the Lancet, one of the most prestigious and oldest peer-reviewed general medical journals.
Sachs — who twice was named among Time magazine’s 100 most influential world leaders — is a professor of economics at Columbia University, a senior advisor to the United Nations and a bestselling author.
In an interview with Robert F. Kennedy, Jr., on “RFK Jr. The Defender Podcast,” Sachs told Kennedy that initially, he didn’t think COVID-19 was likely a laboratory creation.
“I remember explaining in a very learned way to a good friend of mine [who thought a lab leak was possible], ‘No, no, no, that’s not right,’” Sachs said.
“But I watched very closely … and I’ve been an avid reader of the drip, drip, drip of information that has been pried out of the hands of the NIH [National Institutes of Health],” he said, “because they’re not talking. They’re [the NIH officials] not forthcoming. They’re not being honest. Fauci is not telling it like it is.”
“By drip, the story’s coming out,” Sachs said. “And it’s a very worrisome one.”
The Lancet COVID-19 Commission was created to help speed up global, equitable and lasting solutions to the pandemic. As commission chair, Sachs established 11 task forces of international experts to work on addressing various aspects of the pandemic.
One of those task forces was charged with looking into the origins of the SARS-CoV-2 virus.
The task force was not a “setup,” Sachs said. From the first moment, he wanted only to “know what happened,” Sachs said. “I only want to know the truth.”
Sachs named Peter Daszak to head the task force and organize a group of independent scholars to investigate the origin of the virus.
However, Sachs later removed Daszak for not being forthright about his research and his financial ties to the Wuhan Institute of Virology.
Unfortunately, said Sachs, Daszak wasn’t the only task force member who lied about their potential conflicts of interest.
Sachs told Kennedy:
“The task force members were dishonest to me after I was completely clear with them [by asking], ‘I want to know what your potential conflicts of interest are. Are you involved with EcoHealth Alliance with Daszak? Are you involved with Wuhan Institute of Virology? Are you involved with NIH in a way that we should understand that there may be a potential conflict for you?’
“None of them told the truth. Maybe that’s not shocking, but it was surprising to me because these are, some of them, people that I’ve known — I would say personal friends, in some cases — for 20 years.
“They absolutely did not tell the truth when I asked them clearly and explicitly.”
Sachs explained how his continued investigations led him to sense, “Something is really, really wrong about this.”
In May 2022, Sachs and co-author Neil Harrison, Ph.D., a molecular biologist at Columbia University, published an influential article that called for an “independent inquiry into the origin” of COVID-19.
The article included evidence of a possible lab origin.
Kennedy told Sachs he admired his integrity and his willingness to “publicly change your mind,” sharing one of his father’s favorite quotes about how it’s not a crime to make a mistake and that the only crime is not admitting that you made one.
“The great sin is pride,” Kennedy said. “That gets us in so much trouble when people are unwilling to change their minds.”
He added: “Most people who come from your and my background assume that the government and the pharmaceutical industry were kind of doing their best,” Kennedy said, and that it “was hard to believe” otherwise.
Kennedy and Sachs discussed U.S. government history that allowed for the funding of biomedical and biowarfare research.
“NIH has done everything to keep it hidden from view,” Sachs said, “And we should thank groups — like U.S. Right to Know and The Intercept — which have done fantastic work to let us see what that’s all about.”
They also discussed the scientific details surrounding a “proteolytic cleavage site” that can be attached to SARS-CoV viruses to make them “very dangerous,” and the evidence that this may have been done.
“It’s dismaying to see it come out,” Sachs said.
On early efforts by some to deflect opinion away from the possibility of a lab leak by citing a five-year-old study, Sachs said:
“A real scientist would say, ‘Gee, we don’t know what’s going on here. Could it have been from a lab? Yeah, it’s absolutely possible.’
“No serious scientist could say, ‘No, it’s not out of a lab because I cite a 2014 paper.’ It’s almost a joke.”
[…]
Via https://childrenshealthdefense.org/defender/jeffrey-sachs-fauci-covid-rfk-jr-podcast/
*Jeffrey Sachs was the Harvard economist reportedly appointed by George Soros to oversee the systematic stripping of Russian assets (to Russian and US oligarchs) under Boris Yeltsin. This process came to be known as “shock therapy.” See

OUT OF MIND » BREAKING NEWS & HOT TOPICS » THE GREAT DIE OFF » Fauci Not ‘Telling It Like It Is, According to Covid19 Commission Chair