Posted BY: J.D. Rucker
The sworn affidavit presented to secure the search warrant for Mar-a-Lago used by the FBI to raid Donald Trump’s home had what appears to be a crucial error in it, one that could be easily debunked. If the facts detailed by independent journalist Paul Sperry are accurate, this could be enough to obliterate the Department of Justice’s case against Trump.
In a post on Gettr, Sperry said:

BREAKING: The FBI affiant who swore to the Mar-a-Lago search warrant appears to have made a critical factual error by stating in the unsealed affidavit: “I do not believe that any spaces within the PREMISES have been authorized for the storage of classified information.” This finding, which is the linchpin of the criminal case vs. Trump, overlooks the fact that:
1) White House records confirm that a Sensitive Compartmented Information Facility (SCIF) authorizing the briefing and storage of classified material up to the TS/SCI level had in fact been installed at Mar-a-Lago; and,

2) records show that the Secret Service had recently awarded a nearly $600,000 contract to upgrade physical security within the premises at Mar-a-Lago for Trump’s post-presidency transition

DEVELOPING: The unsealed FBI affidavit contains several oddities:
1. No where does it flat-out say “classified information” was found in Trump’s 15 boxes. On page 2, it refers only to docs “with classification markings,” which raises the specter they were no longer classified
2. It states the docs “appear” to contain National Defense Information. But agents “triaged” the boxes; they would know if they contain NDI or not
3. The affiant claimed “there is probable cause to believe evidence of obstruction will be found at the premises,” yet there’s no “obstruction” header or section spelling out why he believes this
4. He said he doesn’t believe “any spaces” w/in Mar-a-Lago are “currently” authorized for storage of classified info. So they were, but not “currently”?

This analysis appears to be accurate according to a former federal magistrate (name withheld by request) who reviewed both the redacted affidavit and Sperry’s claims.
It’s odd that the FBI would include such an easily debunked claim about appropriately secure storage areas on the premises on their affidavit. It should not have been necessary for their case if we are to believe they are trying to indict Trump for taking classified documents. By including it, they run the risk of tainting the predicate for the search warrant which could make evidence they collected during the raid inadmissible.
Everything about the raid and the case being built by the Department of Justice reeks of sloppiness and desperation. Are we seeing a Deep State plot blowing up or are we missing a deeper, darker agenda?

Posted BY: Joe Hoft
The corrupt Biden gang, Deep State, Democrats, DOJ, and FBI are in a very terrible spot.  Together they committed a crime and they’re stumbling all over themselves to try and legitimize their illegal actions.
It’s like watching Biden board a plane.  It’s embarrassing.  It is so bad that Americans are making fun of the Deep State actors. 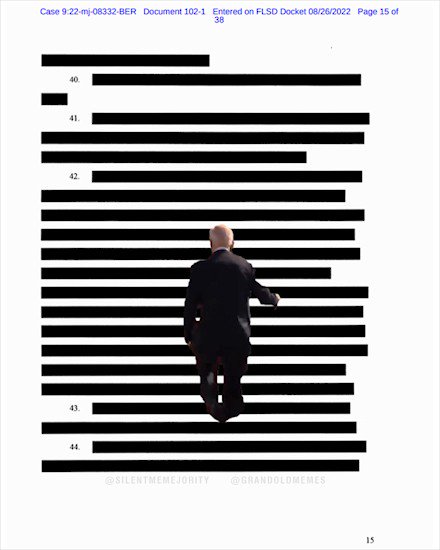 The DOJ yesterday released a document that was almost fully redacted in parts that supposedly showed why the FBI had the lawful right to raid President Trump’s home with guns in hand.  The problem is that there is no legal reason for the FBI to steal documents from the President.  The President’s records are his property and they simply had no right to that property.


An attorney on US law says it best.  The raid on the President’s home was unprecedented, unnecessary and unlawful.

» DOJ Urges Judge To Keep Trump Raid Affidavit Sealed From Public
» On Trump Raid, Democrats Say ‘No one is above the law’ except...
» SHOCK WIKILEAKS: Assange's "Final Blow to Hillary's Campaign" as FBI Reopens Case.
» The Trump counterattack will blow your mind.
» Assange’s Extradition Case: A Critical Moment for the Anti-War Movement