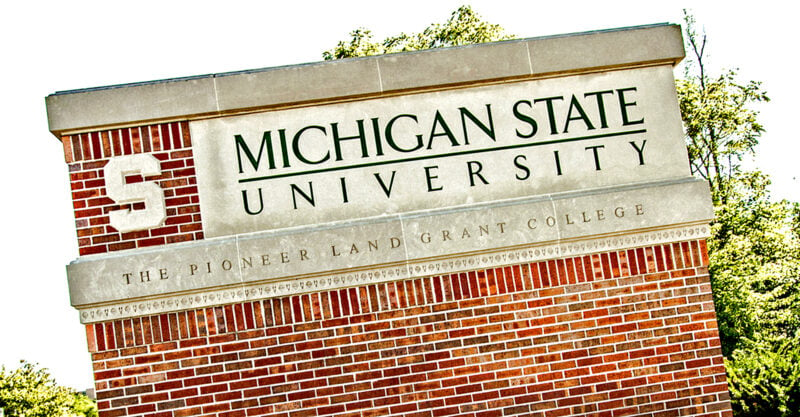 Miss a day, miss a lot. Subscribe to The Defender's Top News of the Day. It's free.
By Zachary Stieber
A college student who suffered a blood clot after getting Pfizer’s COVID-19 vaccine has been given a temporary reprieve from his school’s COVID-19 vaccine mandate.
The Michigan State University (MSU) student, 19, was granted a medical deferment until Nov. 24, according to communications reviewed by The Epoch Times.
No reason was given for the reversal, which came after school officials denied a request for a medical exemption and the appeal of that denial.
The student, whose name is not being made public at this time, received a Pfizer primary series in the fall of 2021 because of the school’s mandate, according to his vaccination card and his lawyer.
After that, he experienced blood clotting in his left leg, according to medical records reviewed by The Epoch Times. The student, a football and lacrosse player, had to miss time on the field due to the serious issue, lawyer Jenin Younes with the New Civil Liberties Alliance told The Epoch Times.
Younes raised the issue on social media this week, saying the school “has denied a medical exemption from its booster mandate to a 19-year-old student who suffered from a blood clot in his leg two months after the second shot that sent him to the ER, put him on crutches, and from which he has not yet fully recovered.”
The post went viral, drawing nearly 15,000 shares and likes on Twitter.
The school sent the medical deferment notice the next day.
Based on the timing, the attention prompted the reversal, Younes speculated. The school didn’t respond to a request for comment.

Documents
MSU received a medical report finding persistent clotting as of July 18, as well as a letter from a physician who reviewed the student’s records and said that there were “no other events” apart from vaccination that would explain the clotting.
The doctor, whose name is being withheld, said in the letter:
“While one cannot definitively link his extensive leg [clotting] to his 2nd vaccination, the absence of another explanation raises some concern.
“If there is an underlying and yet undetected proclivity to clotting in Mr. [redacted] potentially exacerbated by the mRNA vaccine, given no sustained community benefit to him receiving a COVID-19 booster, insisting that he do so is, at the very least, medically, and epidemiologically unwarranted and potentially dangerous.”
The Pfizer vaccine is built on messenger RNA (mRNA) technology.
MSU imposed a booster mandate during the 2021-2022 school year, and has kept it in place for the upcoming academic year. The stated justification is “creating a safer community for our students, faculty and staff to live, work and learn.”
The vaccines, against newer variants of the COVID-19 virus, provide little protection against infection and a lowered level of protection against severe disease, according to studies and real-world data. In some cases, they may make it easier for a person to get infected or get sick.
MSU data backing up the mandate is from June 2021 or earlier. Omicron, a variant of the virus, emerged in late 2021. Subvariants of Omicron have since become dominant in the United States.
The school does not appear to have updated any policies after the Centers for Disease Control and Prevention updated its COVID-19 guidance.
Colleges who don’t acknowledge the update by at minimum allowing exemptions for natural immunity from prior infection will face lawsuits, Mark Chenoweth, president and general counsel at the New Civil Liberties Alliance, told The Epoch Times.
The MSU student tested positive for COVID-19 in January 2021, according to a medical record reviewed by The Epoch Times that was sent to MSU.
Younes said that schools should look closely at the mandates, asserting they have “no public health justification anymore” in light of the CDC update and previous admissions that the vaccines do not prevent transmission of the virus.
“It doesn’t make any sense from a public health or medical perspective at all,” she said.