Section of the Garbage Patch in 2019. (Fedde Poppenk)

Our oceans are swirling concoctions of waste that scientists have for years reported is fed by an influx of pollution from both the land and the sea.
But working out what rubbish winds up in the Great Pacific Garbage Patch in the North Pacific, where it comes from, and who is responsible is an ongoing challenge. Now a new study further implicates the global fishing industry in the mix.

"Here we show that most floating plastics in the North Pacific subtropical gyre can be traced back to five industrialized fishing nations," data scientist Laurent Lebreton and colleagues write.
When analyzing 573 kilograms of (dry) hard plastic debris collected by Lebreton and The Ocean Cleanup organization in 2019, the researchers found more than a quarter of the fragments were from 'abandoned, lost or otherwise discarded fishing gear' (aka ALDFG) – and that's not including discarded fishing nets and ropes.
This waste category includes items like oyster spacers, eel traps, and lobster and fish tags, as well as plastic floats and buoys.
Another third of the debris was unidentifiable.
When the authors used computer models to simulate how their samples ended up in the patch, they found that a plastic fragment was 10 times more likely to originate from fishing activities than land-based ones.

Indeed, simulations showed that rivers that carry waste from the land out to sea are much more likely to wash up on the beach.
Less than 2 percent of simulated debris from rivers ended up offshore, carried by ocean currents.
In comparison, 21 percent of trawling gear waste and 15 percent of fixed fishing gear waste drifted into the deep, and more than 85 percent of those particles never encountered land in simulations.
Of all 232 plastic objects analyzed by researchers clues about their origins, roughly two-thirds were made in either Japan or China.
Meanwhile, nearly 10 percent were made in South Korea, 6.5 percent came from the US, 5.6 percent came from Taiwan, and 4.7 percent from Canada.
All of these nations have thriving fishing industries.
"Oceanic sources such as inputs from fisheries have commonly been attributed about half of a million tonnes [of plastic waste] per year, but this estimate which has been repeatedly cited over the years, was misinterpreted from an initial study dating back to the 1970s," the authors write.

"Since then, no recent, more reliable estimate has been proposed."
Obviously, it's difficult to trace the origins of fragments of plastic greater than 5 centimeters floating in the sea. Fishing nets, for instance, don't usually have writing on them. Others items have degraded too much to resemble much of anything, and some are simply too small.
Yet harder plastics over 5 centimeters in size can sometimes still contain brand or company names, and a few letters or characters can possibly reveal their origin.
In descending order, the most common languages identified among some 200 plastic objects with recognizable text in the current study were Chinese, Japanese, English, and Korean. 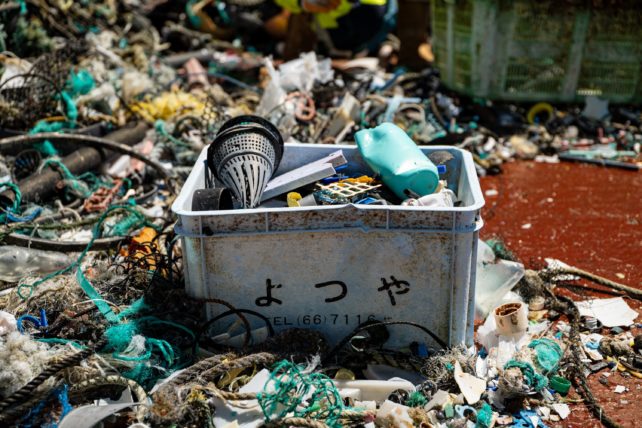 Plastic from the Great Pacific Garbage Patch with clear signs of Japanese writing. (The Ocean Cleanup)
Nearly half of the waste products were from the twenty-first century, but one buoy dated back to 1966.


When the team simulated international fishing efforts alongside ocean currents, they found China, Japan, South Korea, the US, and Taiwan probably contributed 87 percent of fishing waste to the North Pacific garbage patch each year.
Compared to what the models suggested Japan should have contributed, more waste was found in the garbage patch with Japanese writing than expected. The authors think that's because the 2011 tsunami carried a bunch of waste from the nation out to sea.
"These five countries were not recognized as major contributors to land-based emissions of plastics into the ocean but instead, they were identified as major fishing nations in the North Pacific Ocean," the authors write.
"A greater transparency from the fishing industry and strengthened cooperation between countries to regulate and monitor the generation of ALDFG would help reduce emissions from the 'other tap' of ocean plastics."
Otherwise, the Great Pacific Garbage Patch is likely to keep growing.
The study was published in Scientific Reports.