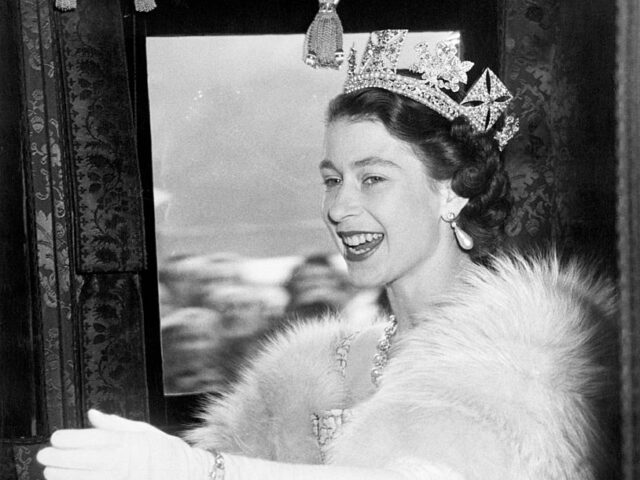 Buckingham Palace has announced the death of Britain’s Queen Elizabeth II, aged 96, ending her 70-year reign.
The Queen died at Balmoral, her private Scottish home this afternoon at the age of 96. She was Britain’s longest-ever reigning Monarch, at 70 years and 214 days.


Buckingham Palace released a brief communication at a little before quarter to seven in the evening London time, remarking that: “The Queen died peacefully at Balmoral this afternoon… The King and The Queen Consort will remain at Balmoral this evening and will return to London tomorrow.”
According to the customs and laws shared by the United Kingdom and 14 other Commonwealth Realms of which Her Majesty was head of state, the Prince of Wales — known as the Duke of Rothesay in Scotland — as heir became King at the moment of his mother’s passing.
The new King may select a regnal name, or choose to continue as King Charles the Third. The associations of the English Civil War with the name Charles may prompt such a decision, or it might be thought enough time has passed.

While the nation will now observe a period of mourning for the popular and long-lived Queen Elizabeth II, the coronation of King Charles could come as early as twelve months time. 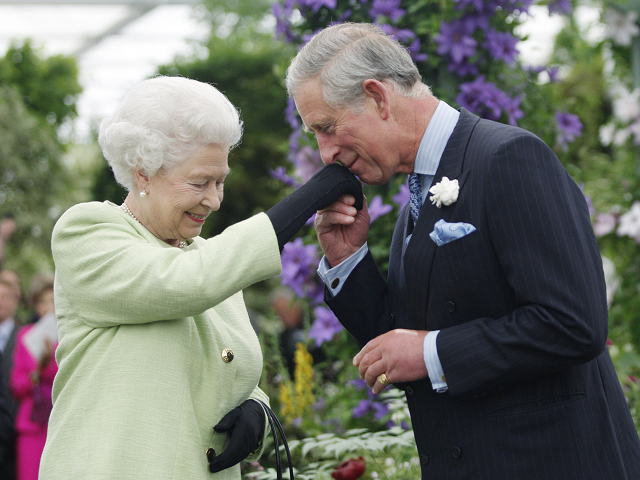 Queen Elizabeth with her son, the then Prince of Wales / Getty
One of the most remarkable achievements of the reign of Queen Elizabeth II may be judged to be the popularity not just of the Queen herself, but of the institution of monarchy over a period where support for many other traditional aspects of British life has all but collapsed.
Research by British pollster YouGov in 2015 found the overwhelming majority of British citizens supporting the Monarchy, and 62 per cent believed there would still be a monarchy in the year 2115.

Similar research found the Queen had a significantly higher approval rating than any serving or former politician and was the most admired person in Britain. 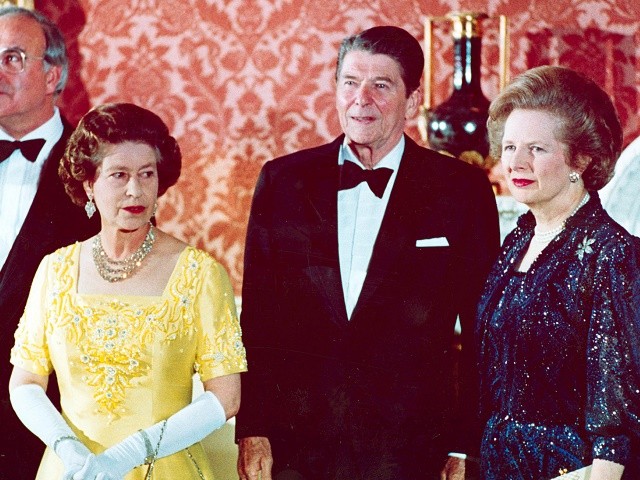 At a gathering of world leaders in 1984, (left to right) Queen Elizabeth II stands with U.S. President Ronald Reagan and then Prime Minister Margaret Thatcher at London’s Buckingham Palace / AP Photo
Born on the 21st of April 1926, the then Princess Elizabeth was not expected to become Queen, but the abdication of her uncle Edward VIII after a tumultuous short reign in 1936 saw her father become King instead. Serving in the Auxiliary Territorial Service during the Second World War, the Princess learnt to repair army vehicles and was one of — if not the only — remaining heads of state worldwide to have served in the Second World War.

Having met Prince Phillip of Greece and Denmark before the war, the couple were married in 1947. The Royal Couple had four children including the now King Charles: Princess Anne, Prince Andrew, and Prince Edward. Prince Philip died in 2021 aged 99, just two months before his century. 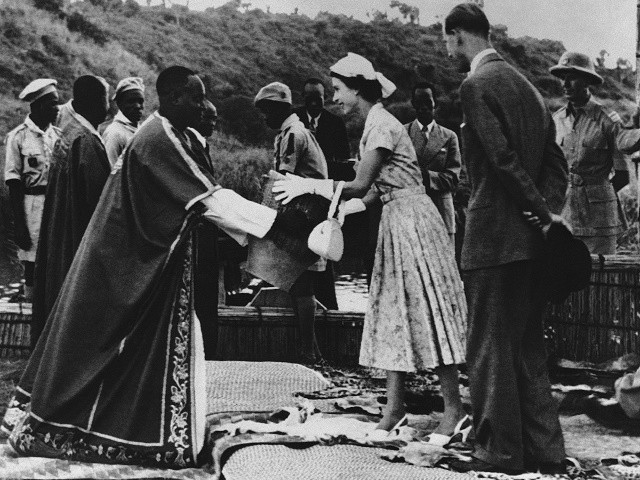 Queen Elizabeth II with the Duke of Edinburgh on a Royal visit to the then colony of Uganda in 1954 / AP Photo
While the end of British rule in India ended before Queen Elizabeth II ascended the throne in 1952, historians may remember the second Elizabethan age as having been one that witnessed the end of the British Empire. Large parts of Africa were still British possessions, but a rapid process of decolonisation encouraged by successive British governments saw that influence abroad wane.
At the end of her reign the Queen, in addition to heading the constitutional monarchy of the United Kingdom of Great Britain and Northern Ireland and the overseas territories including Gibraltar and the Falkland Islands, the Commonwealth Realms which kept her as head of state are Canada, Australia, New Zealand, Jamaica, Antigua and Barbuda, Belize, Papua New Guinea, Saint Kitts and Nevis, Saint Vincent and the Grenadines, Tuvalu, Grenada, Solomon Islands, Saint Lucia, The Bahamas.

Conceivably, some of those Realms could choose this moment to divorce themselves from the monarchy as support for the individual — Queen Elizabeth II — may have been considerably greater than support for the institution. Some senior realms like Australia wax and wane considerably on the monarchy depending on who is in government. Canada has spent decades erasing the old symbols from its institutions including creating a new flag and military uniforms. 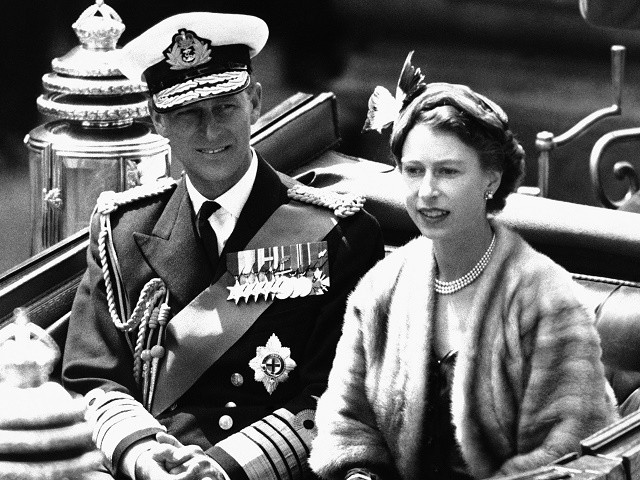 Queen Elizabeth II and the Duke of Edinburgh sit with hands clasped in their laps in 1954 / AP Photo
While many other nations formerly enjoying British rule went their own way to become republics — the latest being Barbados in 2021 — this change saw a new opportunity for the monarch as head of the Commonwealth of Nations, a global association of predominantly former British territories and colonies. King George VI had been head of the Commonwealth before Queen Elizabeth II, but unlike her royal titles there is no guarantee this will automatically pass to King Charles, and will likely be decided at the next Commonwealth Heads of Government meeting.
By its own account, the Commonwealth is “a voluntary association of 56 independent and equal countries. It is home to 2.5 billion people”. The body promotes development, democracy, and peace, and also boasts of trade advantage enjoyed by its members.

From Winston Churchill to Mary Elizabeth Truss, the Queen was served by 15 British Prime Ministers. The United States of America has seen 14 Presidents in that time, from Harry Truman to Joe Biden. 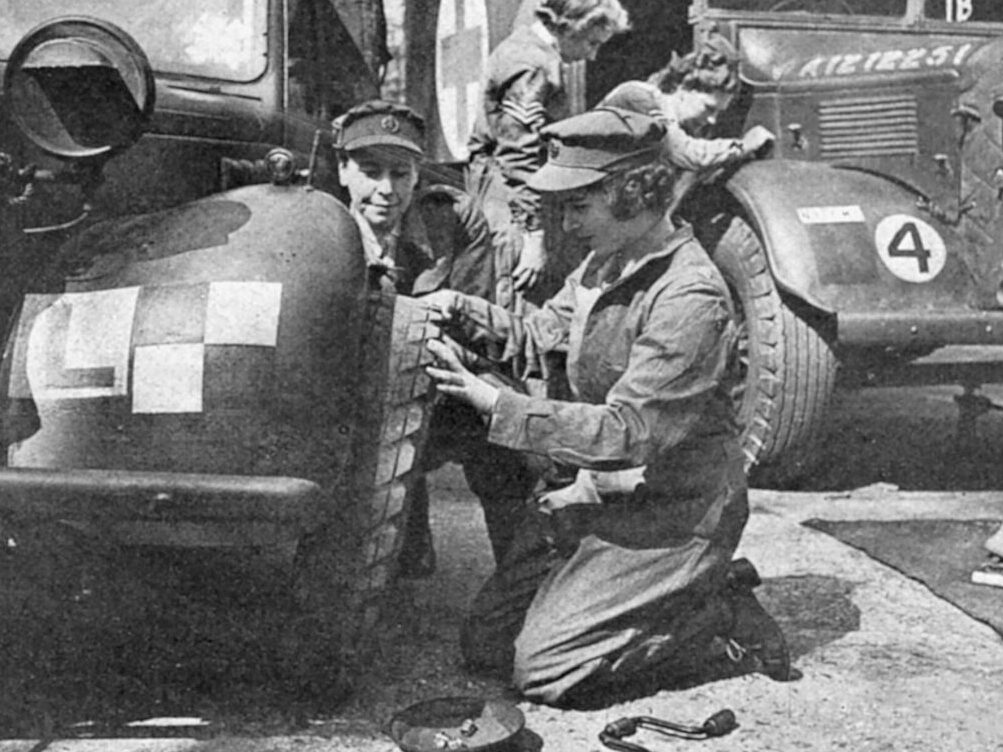 Princess Elizabeth, future queen Elizabeth II of England, changing an army lorry wheel as a member of the Auxiliary Territorial Service during the Second World War (Photo by Roger Viollet via Getty Images) 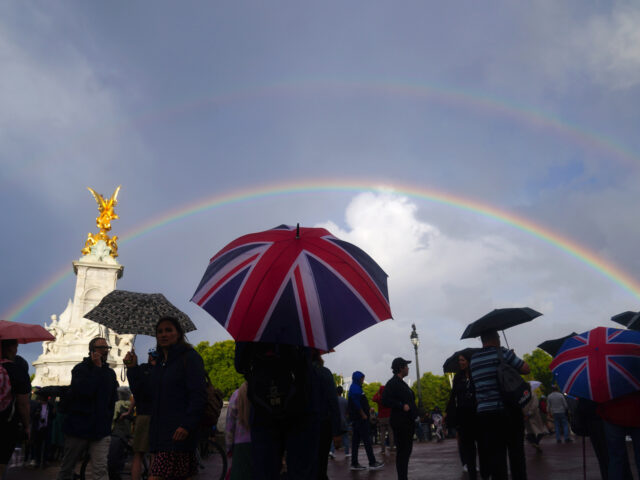 A double rainbow which appeared in the sky over Buckingham Palace on the day Queen Elizabeth II passed away has been attributed to the late monarch and her husband, Prince Philip.
The Queen, who has passed away aged 96, bid a final farewell to Prince Philip, her husband of over seven decades, just last year.

Posts : 1417
Join date : 2014-01-03
Location : England
The commonwealth bowed to the wish of madge to accept king tampon as head of the commonwealth. How long that will last is anyones guess

For the life of me I cannot remember two of the three things stated by ward, parkes, fulford that would trigger a global power grab, only that the the announcement of the death of madge was one of them

Posts : 1417
Join date : 2014-01-03
Location : England
It has become known that mary truss hates her name so uses her middle name, such a shame mary let this be known as many people will not call her mary in public, mary will be very busy over the next few months and I would suggest to mary she has an immediate course in understanding the word governance

president mary truss may need all the help sent to mary for mary to stay in place, there are already veiled threats to mary of a no confidence vote and bringing boris back as pm

the late Rod Stirling would have grabbed this last ew weeks for a whole series of marys twilight zone....remember dont call mary, mary as it makes her sad

Admin
Posts : 106784
Join date : 2012-01-04
Location : Woodstock Nation
My condolences to you bs4ever in that you now have a king tampon! lol so I must ask... why do they call him that? I have seen it in a couple of places now so looking forward to the backstory.

Posts : 1417
Join date : 2014-01-03
Location : England
I do get the impression that king tampon the turd will be the catalyst for the end of monarchy or at least as we know it

Does monarchy have a place in todays world?

It seems very 17th century and quite bizarre to see the fawning lickspittles falling over themselves to be close to the big chief. charles had all the opportunity to be as forward thinking as his grt, grt, grandfather Edward VII.

Edward at some function prior to 1910 when he died is known for words and actions way before their time such as upon hearing the word nigger he sent the room silent, stared at the offending speaker and said "that word is a terrible word and I will not have it spoken in my presence"

Unlike Charles he spent his long apprenticeship forging links with all countries and his portrait hung in rooms all over Europe. Charles on the other hand promoted gardening