Social media posts from Biden National Monkeypox Response Coordinator Dr. Demetre Daskalakis suggest he dabbles in witchcraft and/or satanism.Biden’s possibly satanic hire may be at odds with his Catholic religion and should be a matter of public interest.

WH monkeypox coordinator Demetre Daskalakis: We're "signaling to people who are in the gay/ bisexual/other-men-who-have sex-w/-men communities, & also transgender people who have sex w/ men, that it’s really important to have awareness that it's circulating." 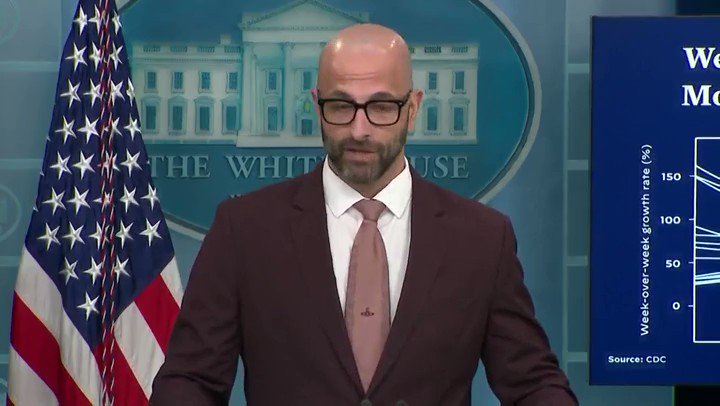 
However, deep-dive research by The National Pulse into Daskalakis’ social media accounts has turned up even more disturbing photos suggesting the openly gay White House appointee may dabble in witchcraft and/or satanism.
Biden announced Daskalakis’ new position back on August 2, noting his expertise in HIV and “on health issues affecting the LGBTQIA+ communities,” and saying his knowledge will help “mitigate the spread of the [monkeypox] virus.”
According to social media posts uncovered by The National Pulse, Daskalakis and his husband Michael Macneal co-own a cycling gym called The Monster Cycle in New York City housed in an old church and known for its bizarre goth symbolism.

From the National Pulse:

Daskalakis’s social media presence is disturbing, to say the least. Alongside his partner Michael MacNeal, the pair launched a “goth” gym in New York, which originally ran out of the high-profile Equinox gym chain, before spinning off into its own brand based in a former gay nightclub that in turn had taken over an old church in Manhattan: Monster Cycle.
One Monster Cycle post from October 2018 shows the number “666” – the “number of the beast” – on fire, with the Pulse commenting their social media is “replete with Satanic imagery.”

Another post for the gym in 2018 promoted an online special advertising “6 rides for $66.66,” with an attached photo reading, “Satan is waitin’.”

The occult-themed fitness studio even caught the attention of The New York Times, which downplayed the satanic aesthetic in a glowing 2014 article on the gym titled, “Health Goth: When Darkness and Gym Rats Meet.”

“Walk toward the graffiti wall, turn left at the 11-foot pentagram, pass the polished gimp suit (watch your head, there is a leather-harnessed bicycle suspended from the ceiling) and descend the steps into the basement,” the Times wrote.

Monster Cycle shared the article on Facebook, with a caption reading, “We’ll Steal Your Soul.”

The Pulse notes a piece by fitness studio review site Sweat Concierge compared Monster to a “dungeon” and described their co-ed locker rooms as “terrifying.”

Meanwhile, Daskalakis’ partner in that same year gave an eerie comment to the New York Post, saying, “There’s light even in darkness,” which is a quote tattooed on Daskalakis’ chest embedded in what appears to be an inverted pentagram.
“He also has ink showing the corpse of a dead creature, as well as a serpent, a head with three eyes, and what appears to be a Saint-like figure or even a depiction of Jesus Christ across his stomach,” the Pulse reports.
A 2012 post from Daskalakis’ Facebook depicts a seance-like scene on a table emblazoned with a pentagram, with lit candles alongside a glowing crucifix.

In other photos, Macneal and a friend appear to use the glowing crucifix on an Ouija board, while another shows Daskalakis apparently mocking The Last Supper.

In photos appearing to come from a Halloween party, Daskalakis wears a hockey mask with a pentagram symbol, while Macneal wears a crown of thorns, possibly meant to mock Jesus Christ.

“Launched in 2019, TSTTV provides a wide range of video content relevant to The Satanic Temple including but not limited to: live-stream video of rituals, ceremonies, protests and other gatherings,” a portion of the website’s About Us page reads.

The Pulse reports Daskalakis’ Instagram account was locked down soon after their exposé, however they were able to “archive much of the content.”
While there’s nothing legally wrong with Satan worship, Biden’s hire of the possibly satanic Daskalakis may be at odds with his purported Catholic religion and should be a matter of public interest.