Another way of saying he is guilty: “Andrew was stripped of his royal patronages and honorary military titles earlier this year after he settled a civil lawsuit with Virginia Giuffre, who accused him of sexually assaulting her while she was still a minor in 2001.” 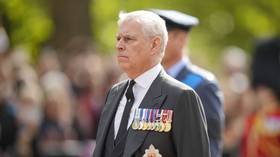 Prince Andrew follows the coffin of Queen Elizabeth II during a procession from Buckingham Palace to Westminster Hall in London, Britain, September 14, 2022

AP / Martin Meissner
Lawyers who represented victims of deceased pedophile Jeffrey Epstein told The Independent that their clients are angry and upset after seeing Prince Andrew return to public life following the death of his mother, Queen Elizabeth II.
The British royal, who has also been accused of abuse, was an associate of Epstein.
Andrew was stripped of his royal patronages and honorary military titles earlier this year after he settled a civil lawsuit with Virginia Giuffre, who accused him of sexually assaulting her while she was still a minor in 2001. Andrew refrained from public appearances after the settlement, but the disgraced royal has returned to the spotlight following the death of his mother, walking in the Queen’s funeral procession and standing vigil at her coffin in Westminster Hall.
“For the victims that are involved, seeing him in these types of public appearances and being praised by the public, it’s frustrating to them,” Spencer Kevin, a Florida-based lawyer who represented nine of Epstein’s victims, told The Independent.

This is a man they see as someone who is, at the very least, disrespectful to the victims, by his friendship with a pedophile. And for him to be lauded in public, as he’s doing, and to be praised by the public, which is what he’s seeking, is insulting.

Kevin suggested that Andrew may be attempting to “rehabilitate his image in the public,” and said that the Duke of York should have grieved in private instead. Mariann Wang, a New York-based lawyer who represented up to a dozen of Epstein’s victims, agreed, calling Andrew’s appearance in public “quite outrageous.”
Epstein’s victims aren’t the only people upset at Andrew’s recent appearances. As the Queen’s funeral cortege made its way through Edinburgh last weekend, a young man was arrested after he called the prince a “sick old man.”
Epstein and Andrew were friends, and the British royal admitted to staying at Epstein’s properties even after the American financier had been jailed in 2008 for soliciting a child for prostitution. Epstein was arrested again in 2019 and accused of sexually abusing dozens of underage girls but was found dead in his Manhattan jail cell before he could be brought to trial. His death was officially ruled a suicide.