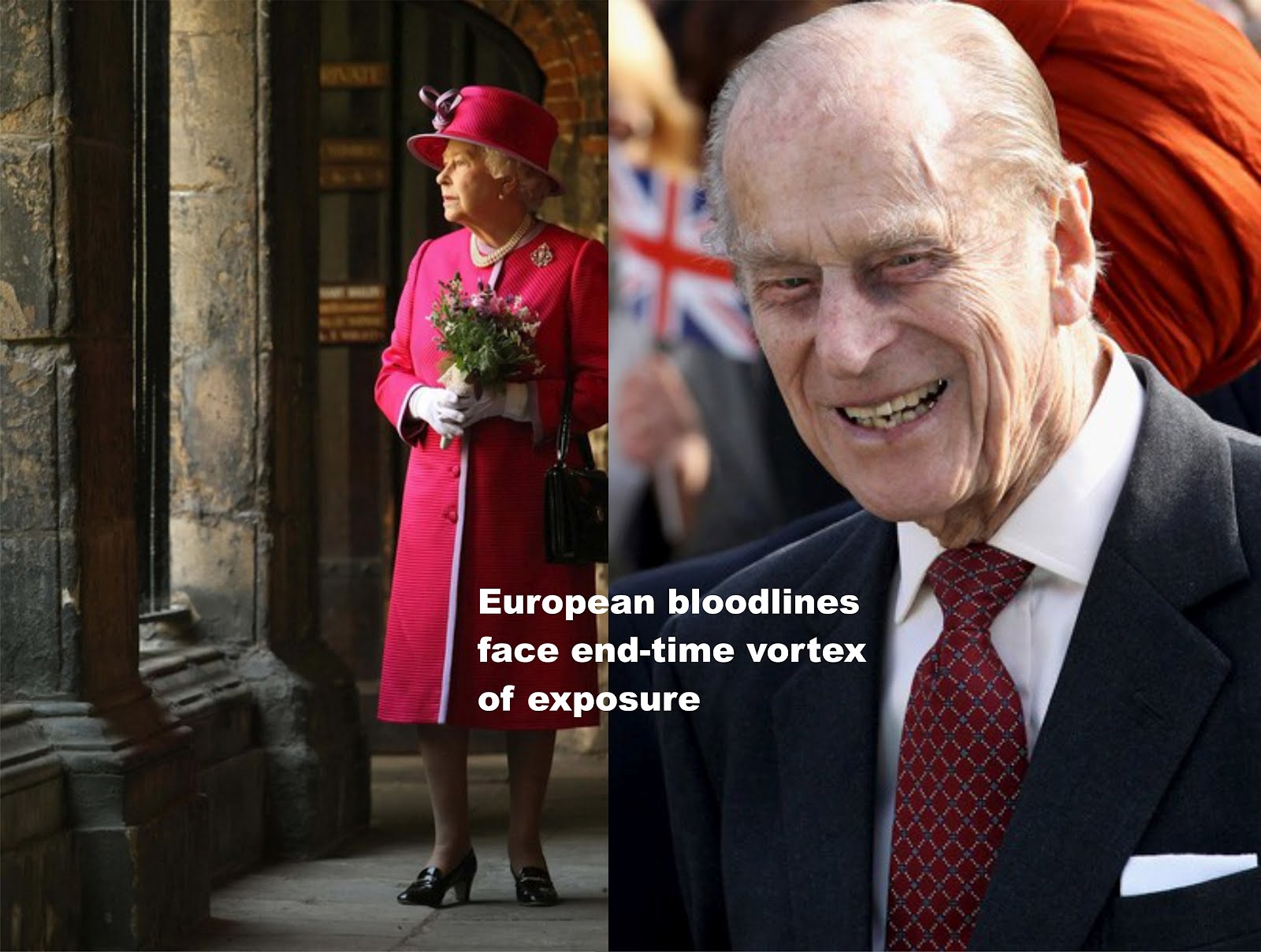 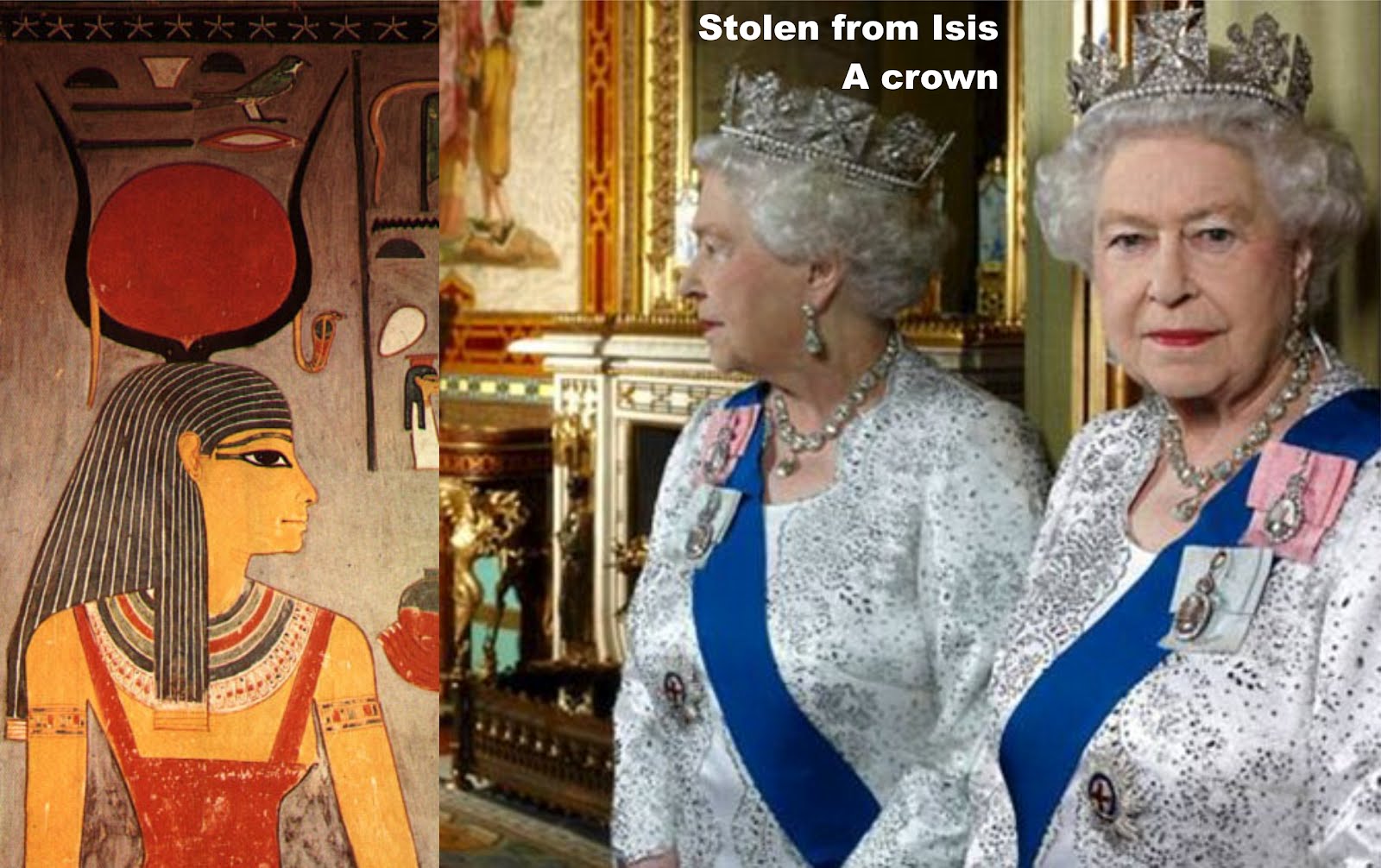 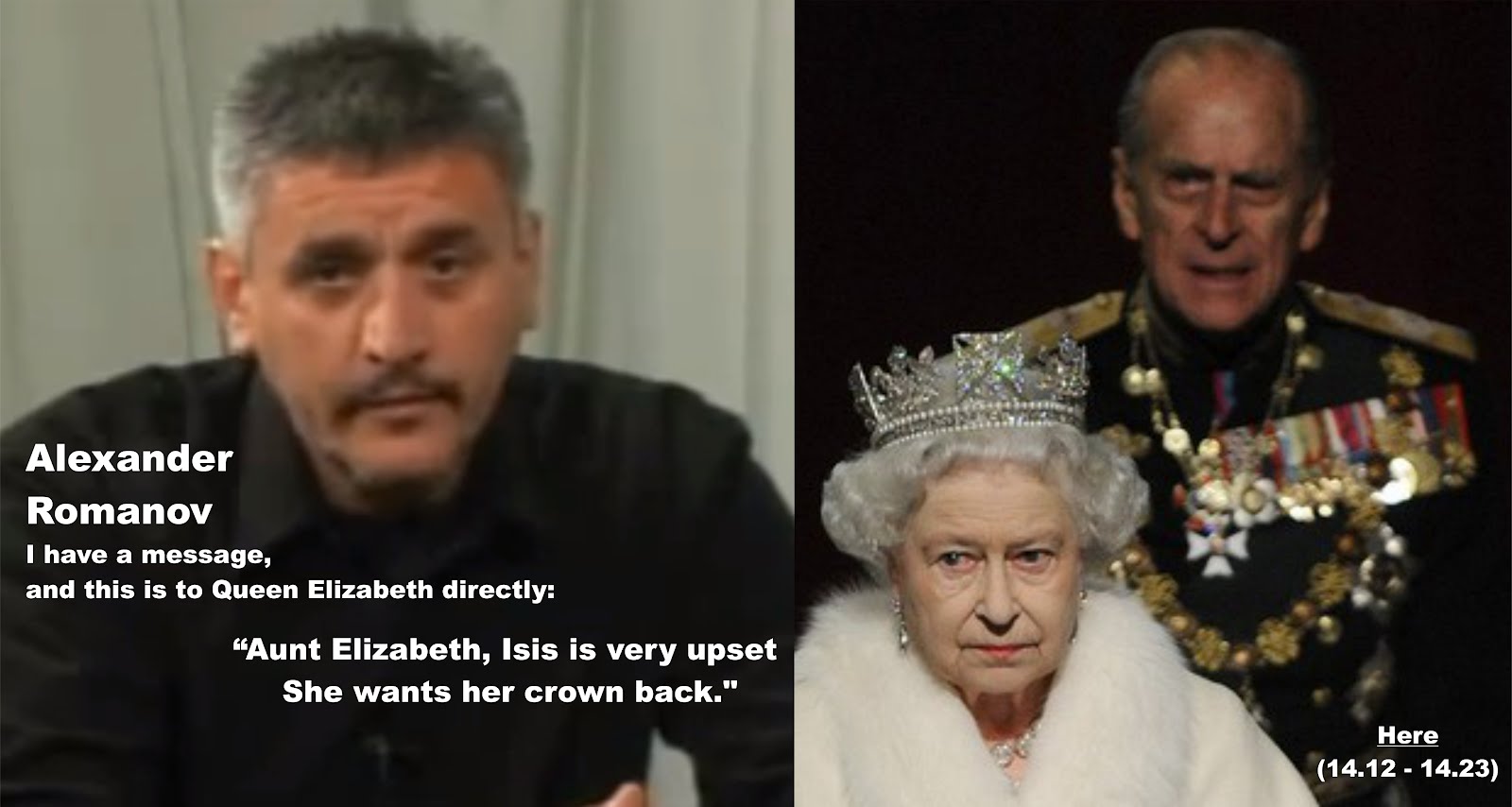 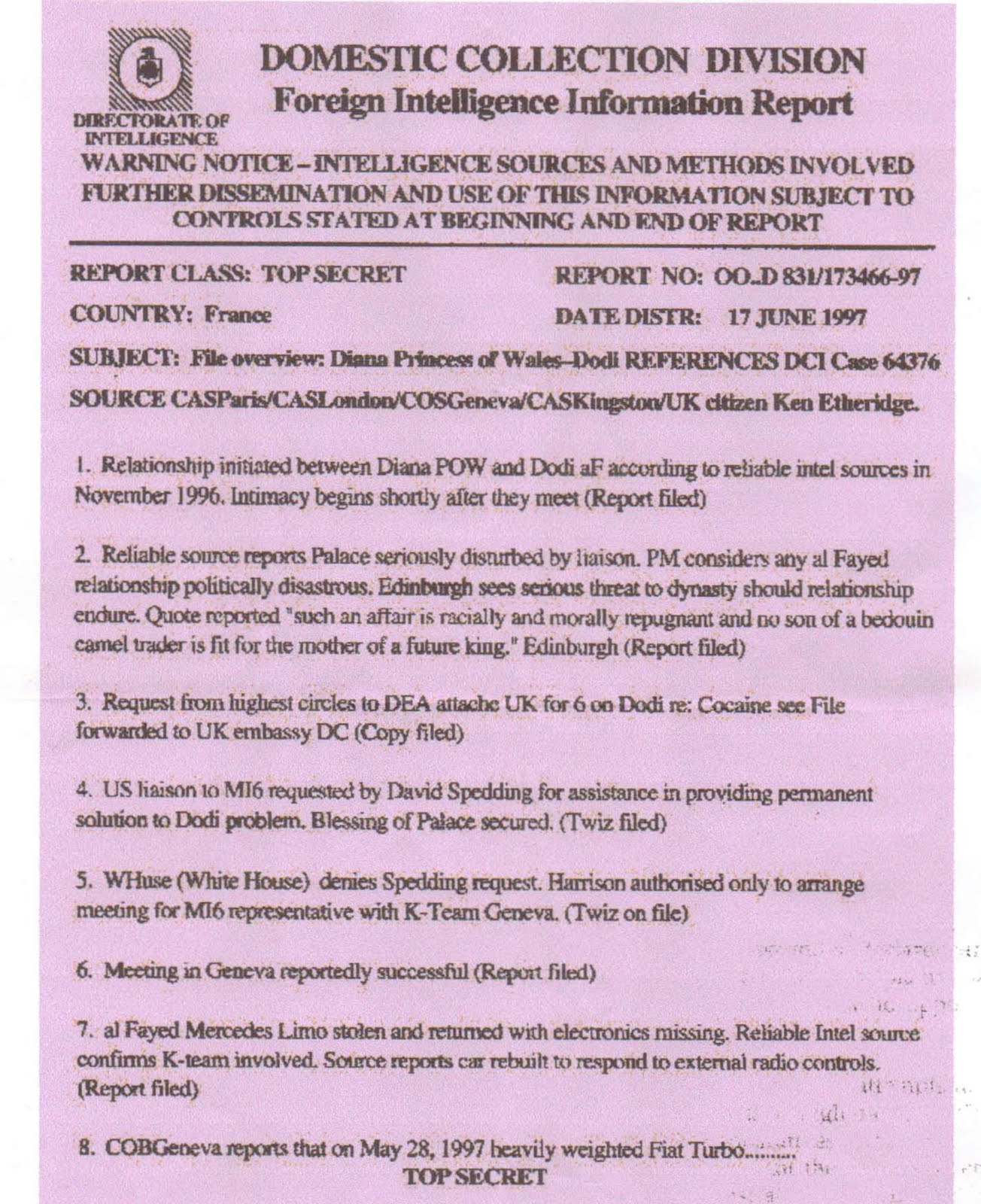 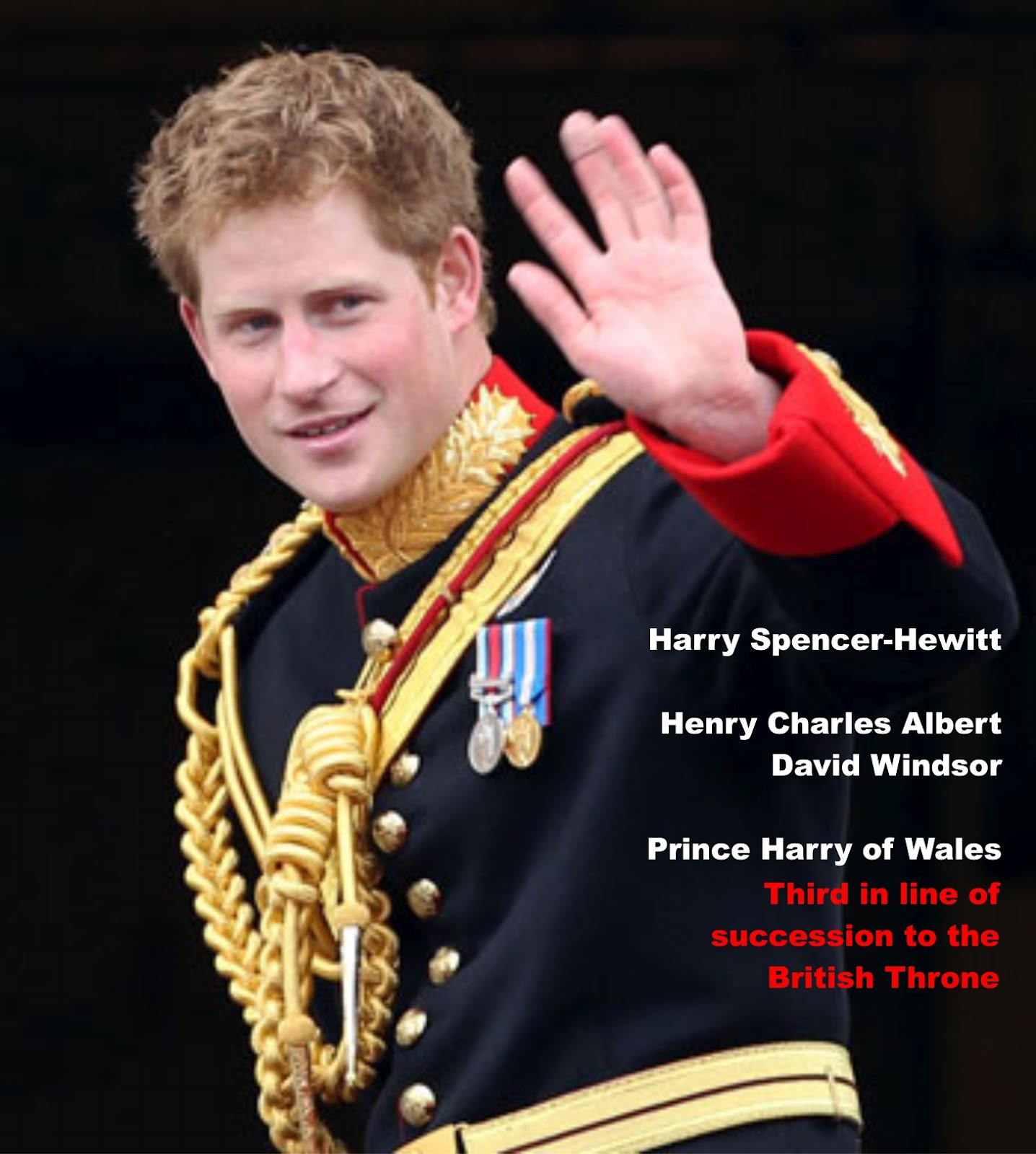 Picture: Diana Spencer & James Hewitt & Prince Harry Spencer-Hewitt.
On Monday 20th February 2012, confirmatory intelligence emerged from Japan (here)
that, below the surface, a widening rift in geopolitical loyalties is
developing between the older and younger members of the British Royal
Family bloodlines. This rift is understood to be developing and
extending through most of the European Illuminati hereditary
control-structures, not just in the UK, but also in countries such as The Netherlands, Spain and Sweden.

What
is being referred to as the Gnostic Illuminati powergroup has issued a
31st March 2012 deadline to the Western banking cartel's Committee of 300, to cease and desist in its Nazi-continuum (Odessa Group) agenda of financial theft and international exploitation.

The Committee of 300 agenda is being implemented through artificially constructed financial instruments and money laundries,
and through wars, invasions and state-sponsored terrorist atrocities
such as the post-WW2 conflicts in Korea, Vietnam, Cambodia, Bosnia,
Iraq, Afghanistan and Libya, and the false-flag attacks of 911
(pre-planned demolition of Twin Towers in New York - more here) and 311 (the pre-planned nuclear tsunami in Japan - more here).

This
Nazi-continuum agenda is still driving the financial nexus and the
foreign policies of the G5 nations (UK, US, Germany, France and Italy).

Romanov has also said that Prince Harry of Wales (British Royal Family; third in line of succession
to the British Throne) has been keeping in touch with the Gnostic
Illuminati group and has agreed to take over control of the British
Royal family from Queen Elizabeth II when she is obliged to abdicate in connection with her covert Chairmanship of the Committee of 300 and other geopolitical machinations. More here (01.01.12), here (29.04.11) and here (19.10.09).

One
of the reasons that the Gnostic Illuminati are working with Prince
Harry, is that this particular member of the British Royal Family is not
a scion (or issue) of the Nazi-continuum, German-English, reptilian
bloodline Houses of Windsor and Saxe-Coburg & Gotha. In this, Harry is unlike his brother, William (Duke of Cambridge), or his father, Charles
(Prince of Wales). Charles is the heir apparent (first in line of
succession) and William is second in line of succession to the British
Throne.

Prince
Harry of Wales is not, therefore, the biological son of Prince
Charles, or the biological grandson of Queen Elizabeth II of England.
However, for reasons of public relations expediency, he was given a
full royal name and rank at his christening in St George’s Chapel,
Windsor, on Friday 21st December 1984. Prince Harry of Wales' full name
is Henry Charles Albert David Windsor. In long-established English
usage, Henry = Harry.

The absence of Prince Philip, Queen Elizabeth's husband, from Prince Harry's official christening photograph,
is considered to be highly significant. Among the English aristocracy
it is normative for the grandfather of the child being christened to
feature in the official photograph. Philip had been present two years
earlier for the family christening photographs of Harry's older
brother, Prince William. That service was held on Wednesday 4th August
1982 in the Music Room at Buckingham Palace. The official christening
photographs associated with the event can be seen here and here.

In
English Protestant Churchianity (Church of England), a christening is
an infant baptism conducted without the informed consent of the infant
involved. It is an ancient Satanic rite designed to close the ajna centre
(the sixth primary chakram) of the developing child. The officiating
priest sprinkles the forehead of the infant with "holy water" and makes
the sign of the cross (the sign of closure) over the ajna centre.
Closure of this transdimensional data portal in the spiritual body
restricts the individual's access to positive spiritual energies from The Higher Evolution.
It also makes the growing child more susceptible to control by low
vibration negative manipulation energies entering through chakras lower
down in the spiritual body. The ajna centre can be reopened in later
life by positive spiritual practices such as creative visualisation,
yoga or benign mediation techniques.

A
longtime employee of Prince Harry's mother, Princess Diana, has
revealed that the British Royal Family has been involved for many
years in a media and intelligence cover-up of Harry's origins. Diana
knew that Harry's father was James Hewitt, and talked about it
frequently in private. This is said to be one reason why she was assassinated in 1997, following a manufactured Paris car crash, by Tavistock-linked agents (K-Team Geneva) of the British Crown Temple. More about the Tavistock Institute can be found here.

Prince Philip,
Duke of Edinburgh (Queen Elizabeth's husband), is reported to have
issued explicit death threats to James Hewitt if he refused to go along
with the royal cover-up. In particular, Philip made Hewitt lie about
the timeline of his relationship with Diana, Princess of Wales.

James
Hewitt was in an active sexual relationship with Diana two years
before Prince Harry was born. Diana had stopped having sex with Prince
Charles about eighteen months before Harry was born because of her
disgust at the active relationship her husband was continuing with Camilla Parker-Bowles.
Parker-Bowles has now been officially re-branded as the Duchess of
Cornwall, but there have recently been indications that Charles and
Camilla are living essentially separate lives, spending much of their
time in separate houses in Gloucestershire and Wiltshire. More here (27.02.12) and here (26.02.12).

Prince Harry looks very similar to James Hewitt. He has ginger hair like Hewitt and a similar physiognomy. Harry looks nothing like Prince Charles (younger picture here) or like his brother, Prince William (side-by-side pictures here and here).

Harry
is also considerably less intelligent (academically) than his
brother, William, (ask anyone who taught the boys at Eton College) and
unlike William, he did not go to university. Harry's father, James
Hewitt, is also considerably less intelligent than Prince Charles.
And, it might be noted, Harry has inherited playboy character-traits
from Hewitt which are largely absent from William and Charles. But
mutual friends say that Harry is more street-wise, in terms of modern
popular culture and mores, than William.

The
idea that Prince Harry of Wales might supplant his grandmother, Queen
Elizabeth II of England, upon her forced abdication has been around
for a while. But the rumours were given new life at the end of 2011.
Speaking on the record to a television interviewer, Harry expressed the
view that he did not believe the Queen could carry out her public
duties without the presence of her husband Phillip, Duke of Edinburgh.

A
few days after the interview was recorded, Prince Philip suffered a
"heart scare" and spent four days over Christmas 2011 at Addenbrookes
Hospital (Cambridge) "having a blocked coronary artery cleared and a
stent fitted." Observers noted that when he returned to the family
houseparty on the Sandringham estate in Norfolk, the Duke was unusually
vigorous, physically. Seasoned conspiracy-watchers began to wonder
whether the four days "in hospital" were, in fact, four days for the
Tavistock-nexus to get a new Prince Philip clone up-and-running, the
previous one having been terminated unexpectedly. More about the use of
human clones in élite political management can be found here (17.01.12).

It should be noticed that although Harry Spencer-Hewitt (Prince Harry of Wales) is not a scion of the Nazi-continuum Windsor/Saxe-Coburg & Gotha bloodline,
he is still, through his mother's ancestry, an issue of an old,
non-reptilian, English bloodline referred to as the Spencers. The
Spencer dynasty began to develop in pre-Tudor times and became visible
to official exoteric histories around the year 1486 with the rise of
Sir John Spencer. More about the Spencer bloodline can be found here.

False
attributions of birth are nothing new for the British Royal Family. In
March 2012, an old story about the bloodline bona fides of Elizabeth Bowes-Lyon broke surface with renewed energy. Bowes-Lyons was the Queen Consort (wife) of King George VI
from 1936 to 1952. Thereafter she was known as Queen Elizabeth the
Queen Mother. She gave birth to the present Queen Elizabeth II, in
London, in April 1926. 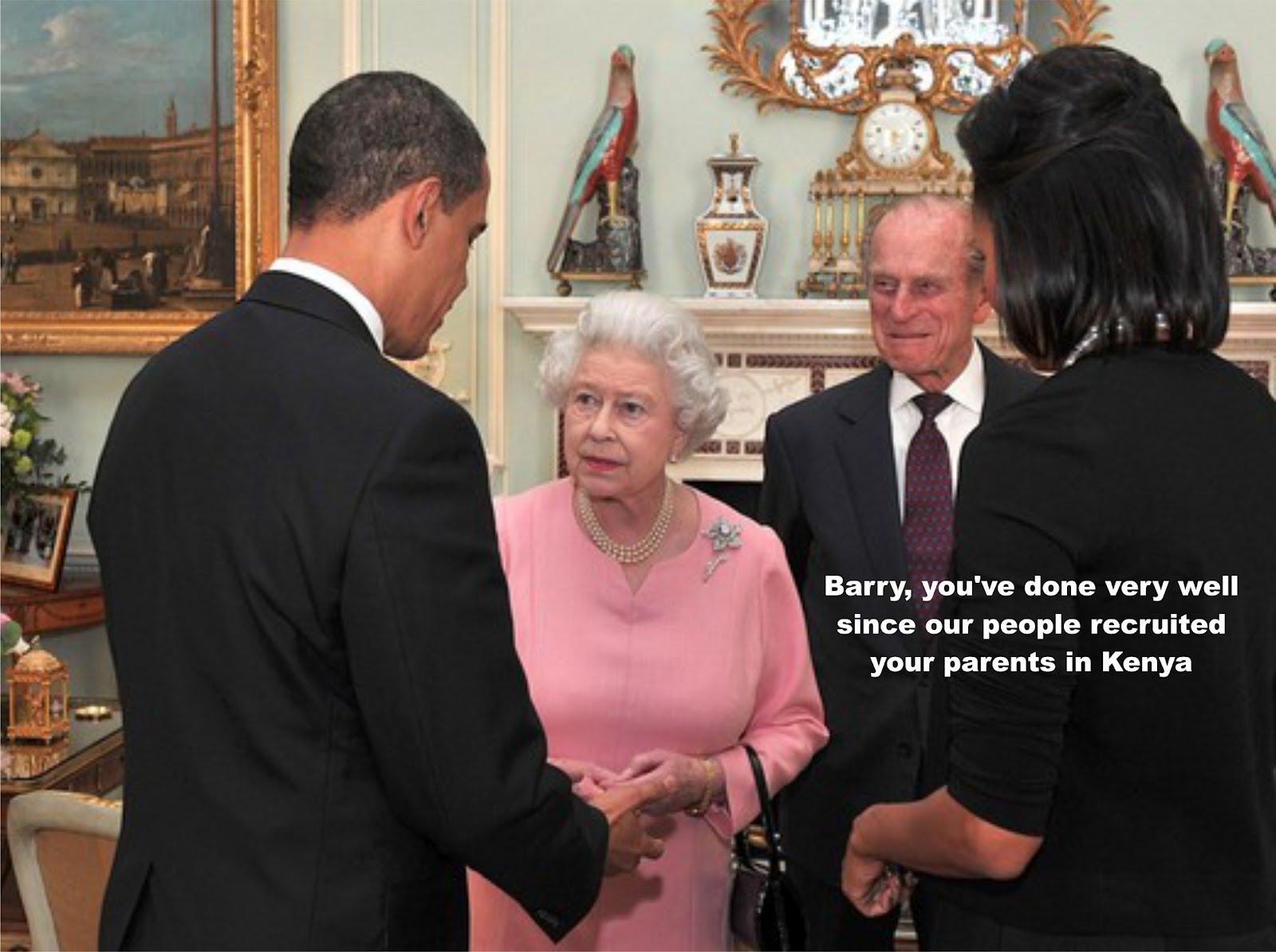 
The NESARA announcements - expected in 2012


2012 Agenda for Disclosure - The opening of Pandora's Suitcase

Corporate evil, artificial intelligence and cyberform spirituality. What is going on inside our computer networks?

Dark Pool Gold. That which glisters returns to haunt the Fed.

posted by Alcuin Bramerton at 01:03


So they now say Prince harry is not prince Chaalllz' son. HAH! He sure looks about 73% lizard to me.


All you need to see is this to know it's true! Thank god
Diana had the sense to bear a non-reptilian son..may he break the
stronghold of these lizards have on the planet, and soon:
http://4.bp.blogspot.com/-daKXWcGkbPY/T0jXBjlb4lI/AAAAAAAAA5M/BGNCwdQFiiY/s1600/Diana%2BSpencer%2B-%2BJames%2BHewitt%2B-%2BPrince%2BHarry%2BSpencer-Hewitt.jpg?SSImageQuality=Full


What a load of new age bullshit
people who Believe this
shit coming from your asshole, must be as stupid as you or simply part
of the global distraction of the new world order.

Dimensions and chakrams. What a load of croc shit... Hahaha fkn wanker

» European bloodlines face end-time vortex of exposure
» VORTEX BASED MATHEMATICS: THE MOST PROFOUND RE-DISCOVERY OF ALL TIME... MAKE. IT. VIRAL!!!
» POLAR VORTEX TIME ~ Michio Kaku - We're in the bullseye - all Hell’s about to break Loose
» The 'Royals' - Time To Face Facts - David Icke
» I Have No Time to Reflect on the Horrors of 13 Years Ago. I Must Face the Horrors of Today.