Two doctors on Tuesday became the first to file a federal lawsuit to stop a new California law (AB 2098) that subjects the state’s doctors to discipline, including the suspension of their medical licenses, for sharing “misinformation” or “disinformation” about COVID-19 with their patients. 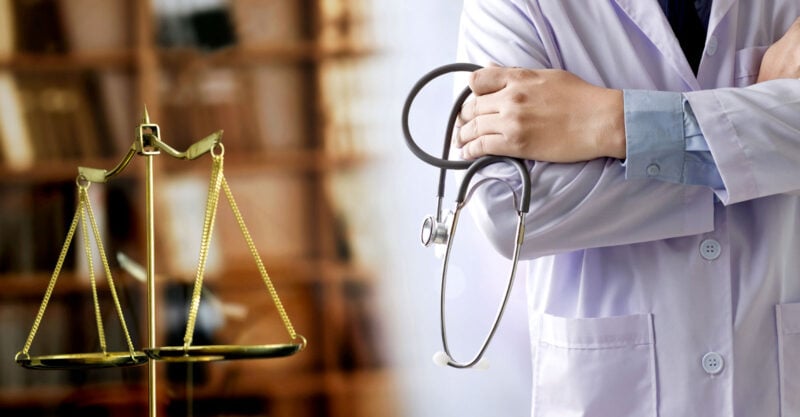 
Two doctors on Tuesday became the first to file a federal lawsuit to stop a new California law that subjects the state’s doctors to discipline, including the suspension of their medical licenses, for sharing “misinformation” or “disinformation” about COVID-19 with their patients.
Dr. Mark McDonald, a Los Angeles psychiatrist, and Dr. Jeff Barke, an Orange County primary care physician and founding member of America’s Frontline Doctors, filed the complaint in the U.S. District Court for the Central District of California.
The lawsuit names 12 members of the Medical Board of California and California Attorney General Robert Bonta.
The plaintiffs also filed papers seeking a preliminary injunction to protect their free speech rights as the case unfolds.
Barke told The Defender:
“[This new law] puts patients at risk. Requiring physicians to consider the state’s narrative when making a medical decision, is bad medicine and dangerous. Consensus in science only occurs when dissenting opinions are censored.”
Commenting on the lawsuit, Mary Holland, president and general counsel for Children’s Health Defense, said, “California’s new law is a clear violation of the First Amendment. It’s startling that the legislature and the governor would even attempt to pass such legislation.”
Holland added:
“Censoring information about health never leads to health, but it certainly can and has led to medical catastrophes. I look forward to courts striking this law down.”
The Los Angeles Times today reported that some doctors fear California’s new law “could do more harm than good.”
“What was misinformation one day is the current scientific thinking another day,”  Dr. Eric Widera, a professor of medicine at the University of California San Francisco, told LA Times.
Liberty Justice Center, a national nonprofit law firm dedicated to protecting Americans’ constitutional rights, is representing McDonald and Barke.
Daniel Suhr, managing attorney at the center, said, “We rely on our doctors to give us their best medical advice, yet the State of California is stopping doctors from doing just that. That’s not just wrong, it’s unconstitutional.”
He added, “Doctors enjoy the same free speech rights as other Americans. The State of California cannot define a so-called scientific consensus on an issue and then punish anyone who dares challenge it.”


Law is ‘at odds with the scientific method itself’
California Assembly Bill 2098 (AB 2098), signed into law Sept. 30 by Gov. Gavin Newsom, defines “misinformation” as “false information that is contradicted by contemporary scientific consensus contrary to the standard of care” and “disinformation” as “misinformation that the licensee deliberately disseminated with malicious intent or an intent to mislead.”
Newsom said the law applies only to physicians’ speech with patients during discussions directly related to COVID-19 treatment.
But Drs. McDonald and Barke allege AB 2098 violates the First Amendment, imposes “government-approved orthodoxy” and “is at odds with the scientific method itself.”
The lawsuit states:
“Disagreement is integral to the progress of medical science, a value that cannot be served by using the power of the state to punish those who dissent from the official line.
“This is particularly objectionable in the context of a new disease like COVID-19, about which consensus opinions and official guidance have regularly adjusted as new information is learned.
“At the beginning of the pandemic, public health authorities insisted that the public not wear masks, arguing they would provide little benefit and should be reserved for front-line medical professionals — that was soon replaced with broadly mandated mask wearing for much of the population.
“Schools were closed in the face of the fear that the disease would spread among children too young to adhere to quarantine procedures — but it turned out that the young were at the least risk, and that such closures may well have been harmful to their development.
“Reasonable minds disagreed then, and continue to disagree now, about any number of such topics, but the search for truth cannot be furthered by a government edict imposing orthodoxy from above, punishing those who disagree with the loss of their profession and their livelihood.”
The lawsuit also alleges that AB 2098 “intrudes into the privacy of the doctor-patient relationship” by “replacing the medical judgment of the government for that of the licensed professional and chilling the speech of those who dissent from the official view.”
The plaintiffs asked that the court “enjoin enforcement of AB 2098 and leave these important matters to the marketplace of ideas.”
AB 2098 was introduced in mid-February by California Assemblymember Evan Low — one of seven Democratic lawmakers who in January formed the Vaccine Work Group to develop legislation promoting the use of COVID-19 vaccines while “battling misinformation.”
The American Medical Association (AMA), which strongly supports the bill, hopes other states will follow suit in “ensuring that licensing boards have the authority to take disciplinary action against health professionals for spreading health-related disinformation,” according to a new policy adopted at its mid-June annual meeting aimed at addressing public health “disinformation.”
The AMA’s adopted policy expanded on prior efforts and called for the organization to work with “health professional societies and other relevant organizations to implement a comprehensive strategy to address health-related disinformation disseminated by health professionals.”
Language in the bill points out that the Federation of State Medical Boards (FSMB) has warned that physicians who spread misinformation or disinformation “risk losing their medical license, and … have a duty to provide their patients with accurate, science-based information.”
The FSMB, as previously reported by The Defender, takes money from Big Pharma and has a history of challenging and attacking non-pharmaceutical medical approaches used by integrative doctors as falling outside the “standard of care” as they define it.
“If this period has taught us anything,” McDonald said, “it is that the scientific and medical environments are constantly evolving, as new information and studies confirm or reject prior policies.
He added:
“Doctors need the freedom to explore alternatives and share opinions that challenge the scientific consensus — that is inherent in the nature of the scientific enterprise.
“California cannot insert itself into the physician-patient relationship to impose its views on doctors and end all debate on these important questions.”