OUT OF MIND » BREAKING NEWS & HOT TOPICS » THE GREAT DIE OFF » Is the U.S. Blood Supply Tainted?

Is the U.S. Blood Supply Tainted?

Despite reports that COVID-19 vaccines cause blood abnormalities, the American Red Cross and the U.S. Food and Drug Administration continue to brush off concerns that the massive vaccine campaign may have contaminated the country’s blood supply. 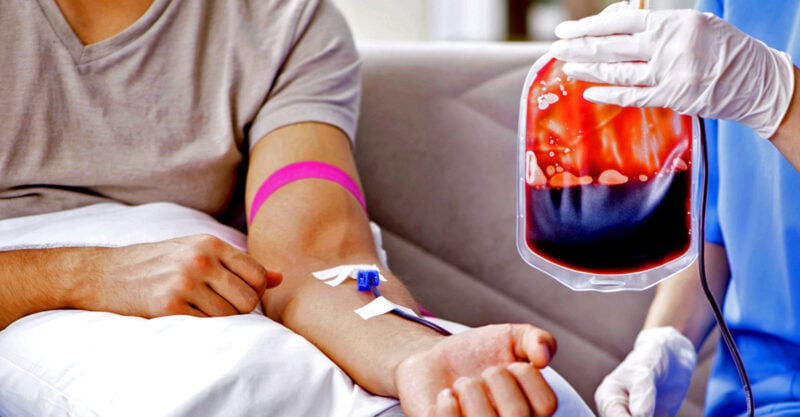 
After the U.S. Food and Drug Administration’s (FDA’s) Emergency Use Authorization (EUA) of COVID-19 vaccines, blood clots were some of the earliest adverse events observed, and abnormal coagulation continues to be one of the most frequent and serious problems reported.
As of mid-September, the Vaccine Adverse Event Reporting System (VAERS) — notorious for capturing only a minuscule proportion of adverse events — had received notification of more than 43,000 blood clotting disorders, including acute-onset problems in young children.
Clotting disorders make the blood clot “too easily,” generating clots that can travel through the bloodstream and increase the risk of heart attacks and strokes, among other potential complications.
Funeral directors and embalmers in the U.S. and U.K. have gone public with shocking descriptions of highly unusual blood clots in up to 85% of the bodies coming under their care — a “massive increase” compared to pre-COVID-19 vaccine times when ordinary-looking clots might be found in 5% to 10% of the deceased.
“In all my years of embalming, we would run across clots from time to time,” said Richard Hirschman, an experienced funeral director in Alabama, “but since May last year [2021], something about the blood has changed. It’s not normal. It’s drastic.”
The rampant clotting and the clots’ disturbing sci-fi appearance — “long fibrous entities that can completely block a vein or artery,” which Hirschman likens to calamari, rubber bands, spaghetti, worms or parasites — are just some of the concerns prompting questions about blood supply safety.
No ‘safety risks?’
About 55% of blood is plasma — which, among other functions, supplies proteins “for blood clotting and immunity” — with the remaining 45% consisting of red blood cells, white blood cells and platelets suspended in the plasma.
Depending on their blood type, individuals who give blood can choose to donate whole blood, plasma or platelets, or they can make a “Power Red” donation (a “concentrated dose” of red blood cells).
The American Red Cross says it will not accept blood from someone whose blood “does not clot normally,” but — following guidance from the same branch of the FDA that oversees vaccines — welcomes immediate donations from anyone who received one of the mRNA or other COVID-19 vaccines available in the U.S., as long as the person says he is “symptom-free and feeling well.”
The Red Cross claims to be independent but openly celebrates its “special relationship” with the federal government — a relationship that includes periodic appropriations and contracts.
In a recent tweet directed at potential blood transfusion recipients, the Red Cross clarified:

The tweet generated numerous responses from the public accusing the Red Cross of disseminating “misinformation” and directing the organization’s attention to peer-reviewed publications contradicting its languid attitude.
In one of the most alarming studies, published in August in the International Journal of Vaccine Theory, Practice, and Research, Italian surgeons described atypical clumping of red blood cells and the presence of “extraordinarily anomalous structures and substances” of “various shapes and sizes of unclear origin” in over 94% of symptomatic, COVID-19-vaccinated individuals whose blood they examined.
The 1,006 study participants, ranging in age from 15 to 85, received a first (14%), second (45%) or third (41%) dose of a Pfizer or Moderna mRNA vaccine about a month before the analysis of their blood.
Pointing to other studies that found foreign materials in the blood of COVID-19 vaccine recipients and in COVID-19 vaccine vials — materials “that the CDC [Centers for Disease Control and Prevention] and the many promoters of the experimental injections claimed were not in them at all” — the Italian authors concluded the vaccine-induced blood alterations were “likely … to be involved in producing the coagulation disorders commonly reported after anti-COVID injections.”
Putting the matter even more plainly, they stated:
“[S]uch abrupt changes as we have documented in the peripheral blood profile of 948 patients have never been observed after inoculation by any vaccines in the past according to our clinical experience. The sudden transition … from a state of perfect normalcy to a pathological one … is unprecedented. …
“In our collective experience, and in our shared professional opinion, the large quantity of particles in the blood of mRNA injection recipients is incompatible with normal blood flow especially at the level of the capillaries.”
Another study by Romanian researchers, sent to the Red Cross by the tweeting public, not only reported that Pfizer’s “vaccine-associated synthetic mRNA persists in systemic circulation for at least 2 weeks” but also noted, “extended plasma clearance times compared to estimates presented by mRNA vaccine manufacturers.”
Meanwhile, a case report from Germany presenting autopsy results for a man who died after receiving three “gene-based” COVID-19 vaccine doses (one AstraZeneca, two Pfizer) over a seven-month period conclusively revealed the presence of COVID-19 vaccine spike protein in both brain and heart — and particularly in small blood vessel cells.
These and other studies may be why members of the public like “Mary” incredulously tweeted back to the Red Cross, “Are you kidding? There is proof it enters other body cells like the heart, causing myocarditis; how do you think it gets to the heart from the injection site???”
The FDA has refused to release autopsy results in its possession for people who died following COVID-19 vaccination.

Out, damned clot
As early as May 2021, vaccine researchers were disclosing the “unexpected” entry into the bloodstream of the vaccines’ synthetic spike protein, while other pharmaceutical industry consultants admitted, “Some of the vaccine dose is going to make it into the bloodstream, of course.”
Around the same time, figures like Canadian physician Dr. Charles Hoffe were warning that technologies like CT scans and MRIs, which can identify large blood clots, would not find the “microscopic” clots affecting many of the COVID-19-vaccinated, who might “have no idea they are even having these microscopic blood clots.”
Hoffe was able to ascertain the widespread presence of micro-blood clots in his mRNA-vaccinated patient population using D-dimer tests that look for protein fragments associated with clots.
The Canadian doctor also cautioned that when blood clots damage the brain, spinal cord, heart or lungs, “those tissues … are permanently damaged.”
A year after these admissions, in May 2022, the FDA finally acknowledged the risk of “potentially life-threatening blood clots” in recipients of the Janssen/Johnson & Johnson (J&J) COVID-19 vaccine.
The European Medicines Agency (EMA) issued similar advisories about AstraZeneca’s COVID-19 vaccine.
Other countries such as India and Denmark admitted to blood clot risks while trying to blame them on “faulty injection technique.”
Neither the FDA nor the EMA said a word about the clotting risks of the more widely used Pfizer and Moderna mRNA COVID-19 shots, even though nearly 7 in 10 (69%) of the clotting disorders reported to VAERS as of mid-September were attributed to Pfizer’s shot, with another 22% linked to Moderna’s and only 9% to the J&J jab.
Although no VAERS reports thus far blame blood clots on the more recently authorized Novavax vaccine, the far-from-traditional nanoparticle concoction not only delivers premade spike proteins — “consistently shown to create clotting issues” — but also residual insect and viral proteins and DNA contaminants.
Large risks from nanoparticles?
Nanoparticle technology is a prominent feature of the two mRNA injections and the Novavax vaccine, and biodistribution of the injected nanoparticles has been a growing cause for concern.
Well before COVID-19, mainstream news outlets alerted the public to nanoparticles’ tendency to “get into the bloodstream and accumulate elsewhere in the body” following oral ingestion — with “unintended effects on cells and organs” — and described how inhaled nanoparticles “work their way through the lungs and into the bloodstream where they can raise the risk of heart attack and stroke.”
On a website for laypeople, the European Commission discloses that nanoparticles “will move with the circulation into all the organs and tissues of the body,” also noting animal model evidence showing “that very small nanoparticles can transfer from a pregnant rat to the fetus.”
In their analysis of vaccinated individuals’ blood, the Italian authors quoted earlier noted their suspicion that some of the foreign materials they detected are “graphene-family particles,” materials that “have been intensively studied by researchers for decades and increasingly so since COVID-19.”
A comprehensive and hardly reassuring 2016 study in Particle and Fibre Toxicology described “toxic side effects” of graphene-family nanomaterials in many biological applications, reporting that they “can induce acute and chronic injuries in tissues by penetrating through the blood-air barrier, blood-testis barrier, blood-brain barrier, and blood-placenta barrier etc.”
That study also noted that long-term toxicity data are lacking.
Many unanswered questions
Recently, a Washington State couple, Cornelia Hertzler and Ron Bly came forward to tell the tragic story of their hospitalized infant son’s death-by-blood-clot last February.
The death occurred two weeks after the hospital administered an unauthorized blood transfusion to the baby, despite claims that, “Patients are free to refuse transfusions for any reason.”
According to the parents, who had clearly articulated their wish to use blood from directed blood donors, the hospital pooh-poohed their concerns and used “random blood” instead.
The infant’s eventually fatal blood clot became evident the very next day, with the clot, by his mother’s account, getting “worse and worse and slowly … inching closer to his heart.”
Although there is no way to know the COVID-19 vaccination status of those who donated the blood used in the baby’s transfusion, the fact that “[url=http://./the family%E2%80%99s clearly articulated wish to use blood from directed blood donors.]most of the nation’s blood[/url] supply is now coming from donors who have been inoculated [against COVID-19]” raises many questions.
Existing blood banks may prefer to dismiss those questions as the fevered imaginings of “COVID skeptics” — arguing that requests for blood from unvaccinated donors “would be an operational can of worms for a medically unjustifiable request” — but farsighted entrepreneurs interested in providing such a service might not have to worry about battling for clients.

·
Follow
We don't label blood products as containing vaccinated or unvaccinated blood as the COVID-19 vaccine does not enter the bloodstream & poses no safety risks to the recipient. If you have safety concerns about potential blood transfusions, please speak with your medical care team.
9:02 PM · Sep 13, 2022

OUT OF MIND » BREAKING NEWS & HOT TOPICS » THE GREAT DIE OFF » Is the U.S. Blood Supply Tainted?