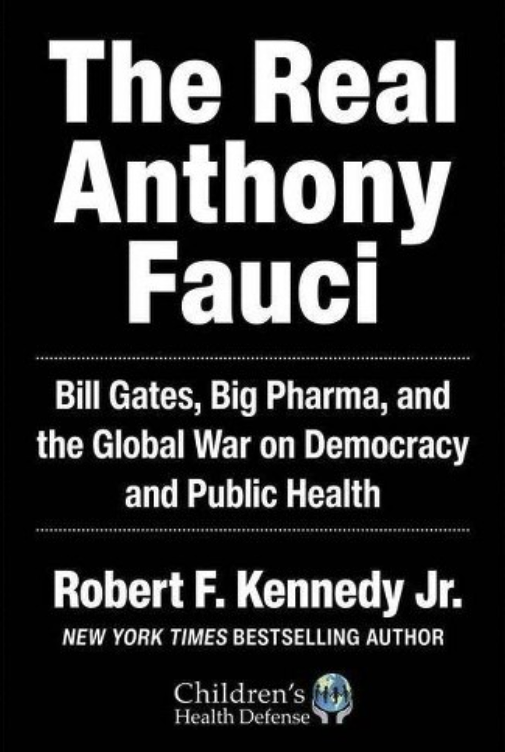 ‘The Real Anthony Fauci’ is a book written by Robert Kennedy Jr. and is an extraordinary documentary filmed by Jeff Hays. I encourage all of you to view another side of the “good doctor.” You will definitely see and hear nothing like this film from the Media or News, which is completely ruled by pharmaceutical companies and the richest people on the planet. See how, for decades, Social Engineers have profited from the deaths of innocent men, women and children. And who has been at the very center of Global Charades, Plandemics, Scamdemics and World Fear? Dr. Fauci, who I like to call “Dr. Falsey,” a Doctor of Death or a Mengele. He has ‘rubbed shoulders’ with the most powerful and richest people; he’s their man! Why? Because he has pushed Their Will, Their Agenda. Tony Fauci and Bill Gates have financially profited as well as many other corporations from the deaths of innocent people, as the book and film will inform you!
Would it shock you to hear Dr. Fauci say (in the beginning) that masks were not necessary and completely useless against any type of flu contagion? The film shows that and also his 180-degree change. Obviously, this famous ‘Puppet’ was ordered to change his position. Now, masks were mandatory, Federal Law! Later, the “anti-virus” vaccines were also mandatory and Constitutional Rights were stripped away from citizens, worldwide, if people were not vaccinated. Big problem or Uncomfortable Truth is: The Virus is a flu that can be licked and the preventative, THE VAX, has killed millions of people!

How did Hank Aaron die? This little-known fact was conveniently covered up in Media. But the documentary, ‘The Real Anthony Fauci,’ showed how they used Hank Aaron as a spokesperson for the vaccine. He demonstrated that the vax was safe for black people to take. Seventeen days after his jab, Aaron died. Exactly like thousands and thousands have died right after taking the vax. Exactly like the Vaccine Adverse Effect Reporting System [VAERS] has reported. But again, this Federal Database is relatively unknown and certainly not emphasized in this time of crisis? Why? Because it demonstrated clearly that the various vaccines are deadly!
Ivermectin (Joe Rogan’s horse-tranquilizer drug) has been proven effective against Co-Vid, but that’s not what Big Pharma, the feds, Bill Gates and Fauci push. These Power Elite profiteers force REMDESIVIR upon the world and that is the danger. You should know whose hands you are in~.
PS:  Since cameras and phones are everywhere, the film showed a collection of videos of people falling down! They dropped like flies! From sporting events, schools, practice fields, interviews, etc. This is just what we feared would happen from Coronavirus, the New Bubonic Plague, which would drastically reduce world population! That’s not what happened. Instead, the people shown in the film have fallen dead FROM THE VACCINES! It’s the vaccines that have reduced the planet’s population.
In April of 2020, Fear gripped me and I spent all Easter day painting my door. I knew then, Fauci was a fraud and a liar. But I had nothing to back that up; it was simply an impression after I saw his face, a Feeling~. Since then, I have been sent much information, mostly out of Europe, that proves I was right. (No one believes me). I wonder if you’ll believe RFK Jr.?
Listen to Robert Kennedy Jr.’s words and spread this link around.

The film is free on the internet, also the audiobook.

FREE! Here is the video

PS:  Since cameras and phones are everywhere, the film showed a collection of videos of people falling down! They dropped like flies! From sporting events, schools, practice fields, etc. This is just what we feared would happen from Coronavirus, the New Bubonic Plague, which would drastically reduce world population! That’s not what happened. Instead, the people shown in the film have fallen dead FROM THE VACCINES! It’s the vaccines that have reduced the planet’s population.
In April of 2020, Fear gripped me and I spent all Easter day painting my door. I knew then, Fauci was a fraud and a liar. But I had nothing to back that up; it was simply an impression after I saw his face, a Feeling~. Since then, I have been sent much information, mostly out of Europe, that proves I was right. (No one believes me). I wonder if you’ll believe RFK Jr.? 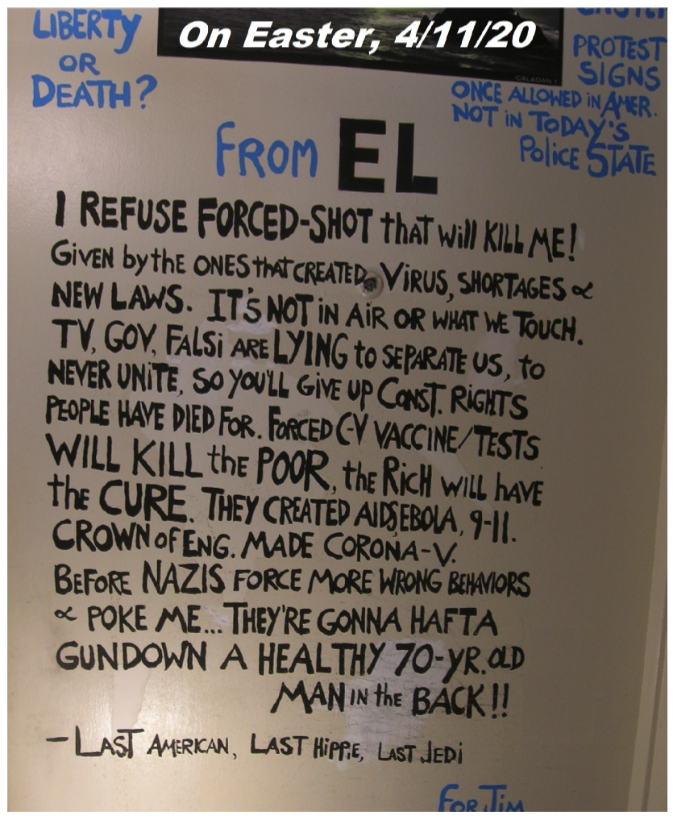 Comments and questions are welcome:
tscaladan@gmail.com

PS Get The Book

by Robert F. Kennedy Jr.  (Author)
#1 on AMAZON, and a NEW YORK TIMES, WALL STREET JOURNAL, USA TODAY and PUBLISHERS WEEKLY NATIONAL BESTSELLER
Over 1,000,000 copies sold despite censorship, boycotts from bookstores and libraries, and hit pieces against the author.

Pharma-funded mainstream media has convinced millions of Americans that Dr. Anthony Fauci is a hero. Hands down, he is anything but.
As director of the National Institute of Allergy and Infectious Diseases (NIAID), Dr. Anthony Fauci dispenses $6.1 billion in annual taxpayer-provided funding for rigged scientific research, allowing him to dictate the subject, content, and outcome of scientific health research across the globe—truly a dark agenda. Fauci uses the financial clout at his disposal in a back handed manner to wield extraordinary influence over hospitals, universities, journals, and thousands of influential doctors and scientists—whose careers and institutions he has the power to ruin, advance, or reward in an authoritarian manner.
During more than a year of painstaking and meticulous research on his laptop and through interviews, Robert F. Kennedy Jr. unearthed a shocking story that obliterates media spin on Dr. Fauci . . . and that will alarm every American—Democrat or Republican—who cares about democracy, our Constitution, and the future of our children’s health.
The Real Anthony Fauci reveals how “America’s Doctor” launched his career during the early AIDS crisis by partnering with pharmaceutical companies to sabotage safe and effective off-patent therapeutic treatments for AIDS. Fauci orchestrated fraudulent do-nothing studies, and then pressured US Food and Drug Administration (FDA) regulators into approving a deadly chemotherapy treatment he had good reason to know was worthless against AIDS. Fauci did the unthinkable and repeatedly violated federal laws to allow his Pharma partners to use impoverished and dark-skinned children as lab rats in beyond order, deadly experiments with toxic AIDS and cancer chemotherapies.
In early 2000, Fauci shook hands with Bill Gates in the library of Gates’ $147 million Seattle mansion, cementing a partnership that would aim to control an increasingly profitable $60 billion global vaccine enterprise with unlimited growth potential. Through funding leverage and carefully cultivated personal relationships with heads of state and leading media and social media institutions, the Pharma-Fauci-Gates alliance exercises dominion over global health policy and our beautiful country.
This is not just another political book. The Real Anthony Fauci details how Fauci, Gates, and their cohorts use their control of media outlets—both conservative and liberal leaning, scientific journals, key government and quasi-governmental agencies, global intelligence agencies, and influential scientists and physicians to flood the public with fearful propaganda about COVID-19 virulence and pathogenesis, and to muzzle debate and ruthlessly censor dissent.

“Dr. Joseph Goebbels wrote that ‘A lie told once remains a lie, but a lie told a thousand times becomes the truth.’ Tragically for humanity, there are many, many untruths emanating from Fauci and his minions. RFK Jr exposes the decades of lies.”
—Luc Montagnier, Nobel laureate“Bobby Kennedy is one of the bravest and most uncompromisingly honest people I’ve ever met. Someday he’ll get credit for it. In the meantime, read this book.” & “Despite all the lying, or maybe in reaction to it, Bobby is becoming a legitimate folk hero. I hear it all the time.”
—Tucker Carlson“As a trial lawyer, Robert F. Kennedy Jr. has taken on the world’s most powerful corporations and held them accountable for harming people and the environment. Those companies denied any wrongdoing—but time and again, judges and juries were persuaded that Kennedy’s position was the right one. Kennedy’s information should always be considered, and agree or disagree, we all learn from listening.”
—Tony Robbins, New York Times bestselling author“Bobby Kennedy and I famously disagree about many aspects of the current debates surrounding Covid and vaccines. We also disagree about Dr Fauci. But I always learn when I read or hear Bobby’s take. So read this book and challenge its conclusions.”
—Alan Dershowitz, Felix Frankfurter Professor of Law, Emeritus, at Harvard Law School; author of The Case for Vaccine Mandates

Robert F. Kennedy Jr. is the chairman of the board and chief legal counsel for Children’s Health Defense. He is also counsel to Morgan and Morgan, a nationwide personal injury practice, and the founder of Waterkeeper Alliance. Kennedy is an esteemed author, with a long list of published books including the New York Times bestseller, Crimes Against Nature, as well as American Values: Lessons I Learned from My Family and Thimerosal: Let the Science Speak. Mr. Kennedy was named one of Time magazine’s “Heroes for the Planet” for his success helping Riverkeeper lead the fight to restore the Hudson River. His reputation as a resolute defender of the environment and children’s health stems from a litany of successful legal actions. He received recognition for his role in the landmark victory against Monsanto, as well as in the DuPont case that inspired the movie Dark Waters (2019).

Reprinted by permission. All rights reserved.

PUBLISHER’S NOTE
Complex scientific and moral problems are not resolved through censorship of dissenting opinions, deleting content from the Internet, or defaming scientists and authors who present information challenging to those in power. Censorship leads instead to greater distrust of both government institutions and large corporations.
There is no ideology or politics in pointing out the obvious: scientific errors and public policy errors do occur—and can have devastating consequences. Errors might result from flawed analysis, haste, arrogance, and sometimes, corruption. Whatever the cause, the solutions come from open-minded exploration, introspection, and constant review.
Ideally, science and public policy are never static. They are a process, a collaboration, a debate and a partnership. If powerful people challenged by this book claim it contains misinformation, our response is simply this: Tell us where you believe some-thing is incorrect, make your best arguments, and offer the best available support for those arguments. We encourage and invite dialogue, criticism, engagement—and every suggestion will be heard and considered.
Since The Real Anthony Fauci is being published in the middle of rapidly unfolding events, and since censorship and suppression of information is underway, it’s best to approach this book as a living document. When new information emerges that can add to or improve the thousands of references and citations in this book, updates, additional notes, and new references will be provided via the QR code below, and the QR codes that appear throughout the book.
We’ve published authors with views on all sides of many controversies. That’s what we do, because at its best, publishing is a town square that lets everyone be heard—and lets everyone else listen, if they choose to. As Alan Dershowitz says, “I always learn when I read or hear Bobby’s take.” I can go several steps further, knowing from my inside view how principled and careful Bobby is as an author—and how painstakingly this book was researched.
We look forward to taking this important journey with you.
Tony Lyons
Skyhorse Publishing