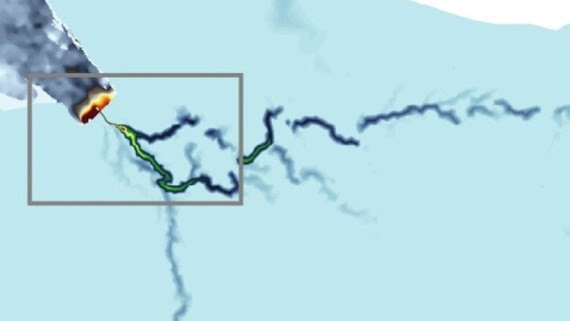 A river longer than England's Thames flows beneath the Antarctic ice sheet, draining an area the size of France and Germany combined, new research reveals.

This under-ice river was discovered using ice-penetrating radar mounted on aircraft. In a series of aerial surveys, researchers discovered a river system snaking 285 miles (460 kilometers) and draining into the Weddell Sea.

"When we first discovered lakes beneath the Antarctic ice a couple of decades ago, we thought they were isolated from each other," study co-author Martin Siegert, a glaciologist at the Grantham Institute at Imperial College London, said in a statement. "Now we are starting to understand there are whole systems down there, interconnected by vast river networks, just as they might be if there weren't thousands of meters of ice on top of them."

This network of flow means that the bottom of the ice sheet is slippery. The region drained by the system has the capacity to raise global sea levels by 14.1 feet (4.3 meters), if it were all to melt, Siegert said. This melt wouldn't happen all at once, but there is a lot of uncertainty about how the ice will respond as the planet warms. "The newly discovered river system could strongly influence this process," Siegert said.
RECOMMENDED VIDEOS FOR YOU...

The river system sits under four slowly flowing masses of ice: the Institute Ice Stream, the Mӧller Ice Stream, Support Force Glacier and Foundation Ice Stream/Academy Glacier, which are vulnerable to instability should their borders retreat inland. The river emerges under a floating ice shelf into the Weddell Sea, where the meltwater has the potential to eat away at the ice shelf from below.

That sort of destabilization could lead to faster ice retreat than expected and to the thinning and fracturing of the ice sitting on top of the Antarctic bedrock, researchers reported Oct. 27 in the journal Nature Geoscience (opens in new tab). Thinner, fractured ice may melt more quickly due to the friction of the ice grinding along the rock, bringing more water to the under-ice river system and further hastening the melting of the ice shelf. Understanding these dynamics and the speed at which melt is likely to occur is crucial for understanding how quickly Antarctica will lose ice as the climate changes, study co-author Christine Dow, a glacial hydrologist at the University of Waterloo, said in the statement.
Related stories
— When did Antarctica become a continent?
— 8 famous Antarctic expeditions
— Antarctica's 'Doomsday glacier' is close to a tipping point
"From satellite measurements we know which regions of Antarctica are losing ice, and how much, but we don't necessarily know why," she said. "This discovery could be a missing link in our models. We could be hugely underestimating how quickly the system will melt by not accounting for the influence of these river systems."
Warming temperatures, for example, could lead to Antarctica acting more like Greenland, the researchers wrote in their paper. Greenland gets toasty enough to experience surface melt each summer. Antarctica's surface currently stays largely frozen in summer, but if it begins to get warm enough to melt, then more water will likely reach the Antarctic ice sheet's base through cracks and crevices. This melt, in turn, could cause more melt down below.
"Previous studies have looked at the interaction between the edges of ice sheets and ocean water to determine what melting looks like," study co-author Neil Ross, a glacier geophysicist at the University of Newcastle in England, said in the statement. "However, the discovery of a river that reaches hundreds of kilometers inland driving some of these processes shows that we cannot understand the ice melt fully without considering the whole system: ice sheet, ocean, and freshwater."